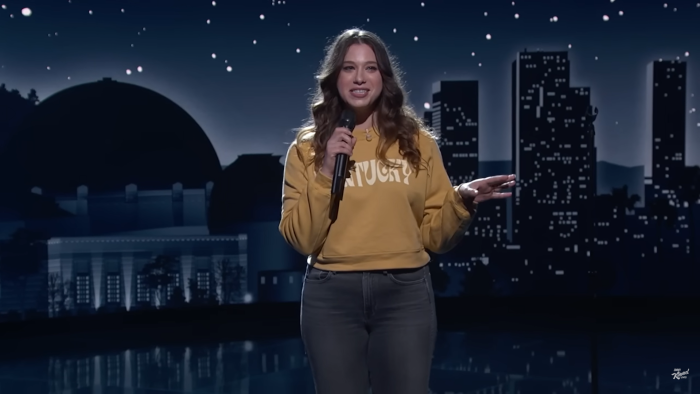 After Dodging A MAGA-Thrown Beer Can, Ariel Elias Makes Her Triumphant Late-Night Debut

Whether they are shouting drunken obscenities or charging the stage, hecklers are the scourge of the comedy community. A lot of times, they can be drowned out or berated to the point that they run away like the cowards they are. Sometimes, things get scary. That was the case with comedian Ariel Elias. She got the best of some MAGA-loving jackasses and had a beer can hurled at her for her troubles. She then drank from it on stage in a move as badass as it is hilarious.

Our own Brian Richards wrote it up here. Including a shining moment when Ariel was congratulated by Jimmy Kimmel and she asked if she could make her late-night debut on his show, and he said yes. Something horrific and scary was turned into an opportunity for a more than deserving comedian and she seized it with all her might.

Ariel appeared on Jimmy’s show last night with a hilarious, confident set. I’ve seen veteran stand-ups sweat and shake while performing for a late-night crowd. It’s a big deal! It means exposure to a new, bigger audience. It means you have to have a tight, five-minute set. The pressure to do well is extreme, and Ariel tackled it with the kind of aplomb you would expect from someone who was attacked on stage and barely flinched.

Elias’s appearance on Kimmel shows that she was more than prepared for this opportunity. Her writing, delivery, and patience are that of a seasoned veteran. In a perfect world, she would be able to show off like this under less troubling circumstances. But, the world sucks. Sometimes, all we can hope for is the occasional happy ending. Ariel Elias got just that, and it’s something to celebrate.