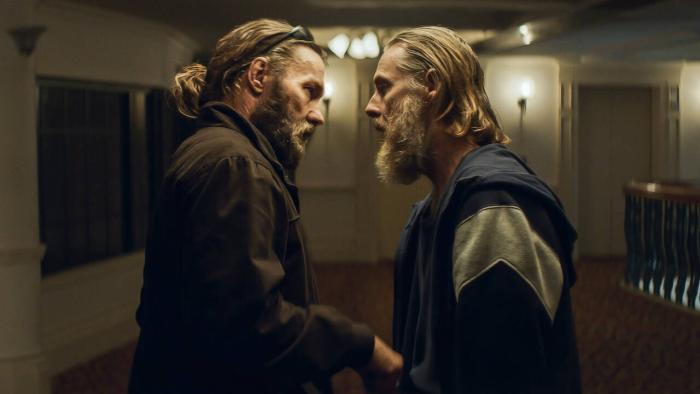 Is it possible to effectively build an entire film around one actor’s face? To erect the structures of narrative, drama, emotion, and atmosphere, all on the foundations laid by a central performer’s appearance? That’s the question that The Stranger and its star, the ever-excellent Sean Harris, seem to be asking. The answer, in this case, is a resounding…maybe? Almost. Mostly.

The Stranger is a Netflix film, but a careful distinction should be drawn here. There are Netflix Films, and there are films on Netflix. I’ve poured plenty of scorn on the former and I won’t waste more words on that flat landscape here. It’s the latter category that is interesting, including as it does things like Roma, Athena, and The Hand Of God—works that seem to slip through the net of the platform’s algorithmic mediocrity. The sophomore feature by writer-director Thomas M. Wright, The Stranger has far too much character, too strong of an individual identity, and the heft and feel of an actual movie, to be reduced to the label of a Netflix Film. It doesn’t reach the heights of the movies just listed, but it certainly stands head and shoulders above something like—*shudder*—Spiderhead.

To say too much about the plot of The Stranger would be unfair. This is a film that luxuriates in ambiguity, that lives in the barrier between umbra and penumbra, crouching in the flickering edges cast by a camp fire, its shape twisting and morphing in the brush of your imagination. I might not be able to give away much at all about the plot—even less than is my usual habit—but as I do have to say something, I’ll say just as much as I knew going into the film. Knowing the bare minimum helps with the enjoyment of most films, but in some ways I think it might be doubly true here, and all you need to know about The Stranger is a variation on what it says on most blurbs: Australian ex-con Henry Teague (Harris) lives a tough, lonely life of hard physical labor; when a stranger strikes up a conversation with him on a plane it looks like his fortunes might be set to change, but at what cost and in whose ultimate favor? The story in the film is based on real events.

That’s it. That’s all you really need to know, and in fact should know, heading in. I realise that might sound like this is a film that relies on its plot beats and its reveals, but despite the fact that there is plenty of drama contained here within those elements, that’s not how most of the movie’s power is generated. It reminded me of Denis Villeneuve’s Enemy in that way; a story that had plenty of plot movement and mystery, but which I remember now mostly for its powerfully effective atmosphere of dread, paranoia, and unease. That really is The Stranger in a nutshell, and director Wright and his cinematographer Sam Chiplin use a similarly distinct visual language and style in order to conjure up these feelings in the viewer. The film is dark, but not in the way that’s come to mean these days. You can actually see things here, but only the things you’re meant to see. Muted tones combine with high contrast compositions to create an ominous and brooding world of bare corners and obscured landscapes that seems as if it’s permanently cloaked in the sort of all pervading shadow that doesn’t really exist in our world. It’s not fair to compare anyone really to the great Gordon Willis, but that’s the direction the filmmakers seem to be aiming for. This is a film set in a land of famously wide open skies of infinite horizons and relentless sunlight, yet I don’t think we ever see the sun in The Stranger, and the perenially overcast sky seems to hang all the lower over the characters’ heads for how huge it is. This is not officially a horror film, but it understands the ominous power that the best of that genre can conjure—I was reminded too of Christian Bale’s The Machinist and the underrated The Standoff at Sparrow Creek.

This darkness and this mood doesn’t just create an atmosphere but serves the themes and the plot at hand in The Stranger too. I’m not sure if it all works, or comes together as well it could, but the component parts are powerfully compelling. Sean Harris further cements his reputation as one of the most magnetic screen actors today; sporting a colossal beard and shoulder-length hair, his character here is an endlessly watchable presence and enigma that is by turns empathetic and terrifying, his eyes and features mirroring the haunting mood that pervades the whole picture. Harris’ co-star Joel Edgerton delivers an excellent performance too, presenting a layered humanity with a cleverly sparse script. There is a well crafted human-level drama at the heart of The Stranger, with shifting power dynamics and gradually unspooling motivations the order of the day. Unsettling dream imagery and some jarring cuts combine with strong sound design to futher submerge you in this nightmare world. The film’s structure and delivery are perhaps at times a little bit too oblique for its own good—and the combination of fictionalised story and characters with the real life case it is based on is something that might warrant further debate—but overall this is a film that will stay with you for quite some time after the credits roll, and more than anything makes me interested in what its creators will do next.


← Olivia Wilde Did Not Mistreat Her Dog | After Dodging a Beer Can, Ariel Elias Makes Her Triumphant Late-Night Debut →