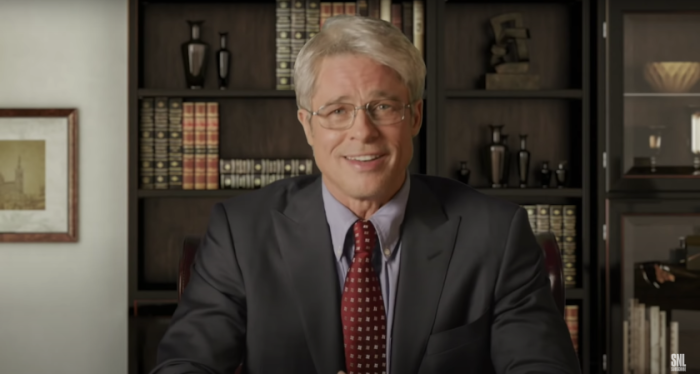 Dr. Fauci Weighs In on the Accuracy of Brad Pitt's Impression of Him on 'SNL'

Over the weekend, as most have seen, Brad Pitt kicked off the second SNL at Home episode with an impression of Dr. Anthony Fauci (there was no sign, however, of Alia Shawkat, or her bicycle). The decision to get Pitt came because Fauci joked previously that, were they to make a movie about the pandemic, he’d like to be played by Brad Pitt.

Brad Pitt made it happen. In an interview with Telemundo’s “Un Nuevo Dia” (via Variety), Fauci reviewed the Ad Astra actor’s performance.

“I think he did great. I’m a great fan of Brad Pitt, and that’s the reason why when people ask me who I would like to play me, I mention Brad Pitt. He’s one of my favorite actors. I think he did a great job.”

Fauci also expressed his gratitude to Pitt for breaking character at the end of the skit to thank medical workers. “I think he showed that he is really a classy guy when at the end he took off his hair and thanked me and all of the health care workers. So not only is he a really great actor, but he is actually a classy person,” he said.

Recall that, in the skit, Pitt basically translated Donald Trump’s idiotic public statements. As for the accuracy of Pitt’s remarks, as far as they concern Fauci’s own thought process when, for instance, Trump suggested people should inject disinfectant into their bodies? “Everything he said on ‘SNL’ is what’s going on. He did a pretty good job of putting everything together.”

That is a very diplomatic way of saying, “Yes, I also think the President is of below-average intelligence.”