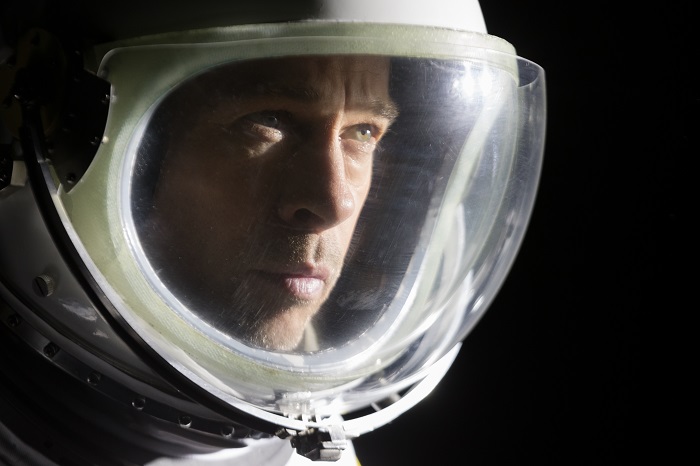 Review: Brad Pitt Reminds Us Why He’s a Goddamn Star in the Gorgeous, Contemplative, and Masculinity-Puncturing ‘Ad Astra’

We often live by telling ourselves we’re running toward something. That familiarly tedious question about your five-year-plan? It’s a way of mapping out the future, of setting a course for tomorrow and the day after that and the weeks and months and years after that, too. It’s a way to pretend we have self-will, self-actualization, self-control.

But the reality most of the time is that we’re instead mostly spending our lives running away from something. Our parents. Our hometowns. Our relationships. The people we used to be, and don’t want to be anymore. The imbalance between life as we imagine it and life as it is is what’s explored in James Gray’s Ad Astra, a meditative and melancholy portrait of a “near future” that hasn’t delivered the progress we were promised. Everything sensational about space travel is thoroughly mundane. Everything unique about space exploration is commonplace. And as we have flattened this wonder, as we have made tedious what should be exceptional, we cling to what we think we need: A father figure, a male hero, a patriarch, a maverick. Unquestioned masculinity with unfettered resources. We want to colonize space like we’ve colonized Earth, and we send a white man out to do it.

Brad Pitt plays Major Roy McBride, the wary and weary son of that man, in Ad Astra; his father, H. Clifford McBride (Tommy Lee Jones, grizzled and great), is a legend on Earth and off of it. An astronaut who was the head of a U.S. Space Command initiative called the Lima Project, whose portrait hangs next to Buzz Aldrin’s at SpaceCom (a nod to First Man, I hope), Clifford’s goal was to investigate the potential of intelligent life in the far corners of our solar system. He was to travel to Saturn, to Jupiter, and finally to Neptune, and he left when Roy was a teenager and arrived at Neptune when Roy was a man, and then he disappeared. No more communication; the absentee father, now absent forever. What was left behind was an outsized image, an impossible shadow, under which Roy shaped his entire life.

Combat experience. Flying experience. Space experience. Roy forms himself into the perfect son to carry on Clifford’s legacy, and it makes him sort of a sociopath. He can’t connect with anyone. He drives away his wife (Liv Tyler). He looks upon other people with a mixture of resentment and confusion and dislike; when entering a room, we hear him think, “I see myself from the outside … with my eye on the exit. Always on the exit.” Someone reaches to pat him on the shoulder; we feel how hard he has to fight the instinct to recoil away. All of this is trained, instilled in him, so that he can be the best astronaut alive, and correspondingly, the best man. “I am focused only on the essential, to the exclusion of all else,” Roy swears during his daily psych evaluation, but what is very clear is that he doesn’t really think humanity is that essential. So it’s ironically poetic, then, that he’s called upon by Space Command to explore something mysterious—electrical power surges coming from space that have already killed more than 43,000 people worldwide, and that might endanger all life on Earth.

“Space I understand,” Roy says, and his top-secret mission is to travel through the far reaches of it to trace and destroy the source of the power surges. And as we see the stages of that mission—a commercial flight from Virgin Atlantic to the Moon, during which a pillow costs $125; a journey from the Moon to Mars; and the final stage, from Mars to the great beyond—we hear Roy’s struggle with himself, and with the responsibility he’s inherited from his father. Imagine if Danny Boyle’s Sunshine, Derek Cianfrance’s The Place Beyond the Pines, and Denis Villeneuve’s Blade Runner 2049 were in a throuple: a bunch of daddy issues, existential concerns about the meaning of life, and considerations of how to operate as a person within a society that is built to diminish you. Hello! This is my favorite genre!

Gray guides us into Ad Astra through Brad Pitt, Movie Star, and he is stellar here. His struggles against the masculine, American agenda he’s been taught play out in his narration, which Pitt delivers with real inflection and emotion, and on his face, which is mostly guarded and tight—except for his eyes. There is next-level nuance going on in the way Pitt shifts between being a good soldier, making eye contact with higher-ups and offering up a pleasant “ma’am” or “sir,” and being the conflicted son aware that every aspect of his identity is meant to cover up an inner void, unable to hold anyone’s gaze. Pitt absorbs every revelation, whether it aligns with his understanding of who he is or directly conflicts it, with a certain steeliness that is far different from the cool guy he was in Once Upon a Time … in Hollywood or the authoritarian father he was in The Tree of Life. In fact, it’s almost like he’s playing the disgruntled son from that Terrence Malick movie, stepping into the shoes of someone whom his character had struggled to understand. There’s a stormy sea of inner conflict crashing in Pitt, and he lets us see all of it in Roy.

Ad Astra knows this is Pitt’s movie, and so no one else really matters: Tyler is here for a scene, Natasha Lyonne pops by for a few minutes, and Ruth Negga gets a couple of big speeches. They’re all good and help break up the film, but this is Roy’s journey, and it’s one that Gray presents with great beauty. Cinematographer Hoyte van Hoytema, who also worked on Christopher Nolan’s Interstellar, captures well the breathtaking gorgeousness and soul-decaying vastness of space. Sure, the action sequences directly go against what we understand about linear time, physics, and gravity, but they’re thrilling and tense, especially a high-speed chase and shootout with pirates in No Man’s Land on the Moon. (Pirates! In No Man’s Land! On the Moon! It’s wild!) The score from Max Richter might sound familiar because he’s worked on The Leftovers and Villeneuve’s Arrival, but it’s also evocative and enveloping, especially during a third-action scene that brings to mind Alfonso Cuarón’s Gravity.

“I’m looking for you all the time,” Roy admits when thinking of his father, and Ad Astra’s investment in that father-son relationship, and in the alternate ways we mythologize and destroy the ones we claim to love, is deliberately pensive. It sneers at what we comfort ourselves with (an Applebee’s on the Moon; mood stabilizers popped like candy), but also acknowledges that we might need those comforts to survive. The question Ad Astra poses to Pitt’s Roy, and which you’ll keep thinking about after, is one that probes at the entire point of our existence: Would you rather run away from life, or toward it? The answer might not be what you expect.

← Meghan McCain Walked off 'The View' After Ana Navarro Shut Her Down | Review: Netflix's 'Unbelievable' Proves Just How Important Belief Is →