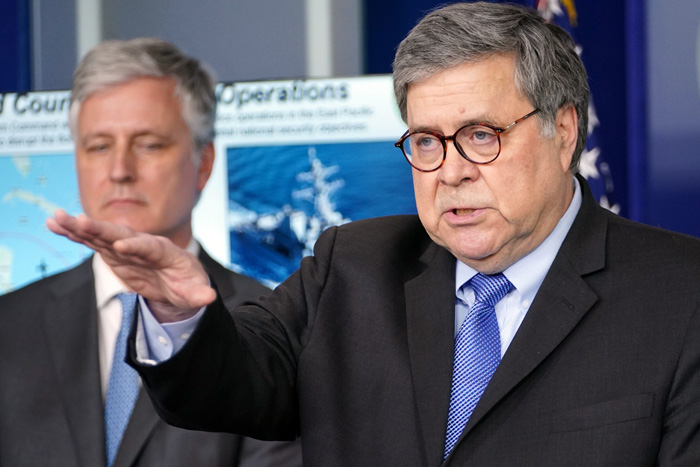 For a brief moment, REPUBLICANS, the administration, and even Fox News seem to finally grasp that there was no sane or humane way to cattle prod Americans straight into the mouth of a global pandemic for the sole purpose of shoring up Wall Street. Talk of “reopening the country” by Easter quickly fell to the wayside, and for a hot minute, reason somewhat ruled the day.

Welp, enough of that.

In a new interview with Fox News, REPUBLICAN Attorney General Bill Barr presumably took a bullet for Trump by calling for social distancing to end after April 30. Despite facilitating one of the largest expansions in executive power up to and including getting the Senate to agree that it’s actually awesome when a REPUBLICAN president commits all kinds of crime right in the open, Barr is very concerned that “we not get into the business of declaring everything an emergency and then using these kind of sweeping extraordinary steps.”

“I think when this period of time at the end of April expires, I think we have to allow people to adapt more than we have and not just tell people to go home and hide under the bed, but allow them to use other ways, social distancing and other means, to protect themselves,” Barr said.

He argued that “we need to be very careful that the draconian measures that are being adopted are fully justified.”

Read: You folks had your break. Time to get back out there and die for the Dow.

To the surprise of no one, Barr’s comments arrive on the heels of fellow REPUBLICAN Bill O’Reilly calling into REPUBLICAN Sean Hannity’s radio show where he dropped a heaping helping of that good ol’ compassionate conservatism.

Via The Daily Beast (emphasis mine):

“The projections that you just mentioned are down to 60,000,” [O’Reilly] said, citing a recent model on projected American deaths through August. “I don’t think it will be that high.”

“13,000 dead now in the USA,” he continued. “Many people who are dying, both here and around the world, were on their last legs anyway, and I don’t want to sound callous about that.”

Sensing that O’Reilly’s comments would draw immediate outrage, Hannity interjected and let O’Reilly know that he’s “going to get hammered for that.”

“Well, I don’t care,” the one-time O’Reilly Factor host fired back. “I mean, a simple man tells the truth.”

Remind me again which party routinely touts itself as “pro-life.” Because I’m pretty sure, “Who cares if a few weak bastards bite the bullet? I’ve got a stock portfolio to think about” widely misses the mark on preserving the sanctity of life. Not that it was ever about that, because let’s be frank, it was about controlling women’s bodies and manipulating religious rubes, but at least try not to let your ghoulish mask slip completely off.

Of course, O’Reilly, Hannity, and even Barr’s remarks aren’t a complete shock considering they’re merely parroting REPUBLICAN sentiments that we’ve seen over and over again over the past few weeks. On top of that, you’ve got evangelical pastors carrying water for REPUBLICAN calls to reopen the economy, and they’re not even hiding it under the guise of wanting to freely worship again. They’re literally retweeting right-wing pundits who are calling the pandemic a hoax and demanding that it’s our AMERICAN RIGHT to have our lungs melted out if we’re in the mood for a delicious sit-down meal at Applebee’s followed by tipping your server less than 10% because “Why should I give them more than Jesus?” (Can you tell I used to work the after-church lunch crowd? Goddammit.)

On a closing note, if you’re wondering why I went out of the way to write REPUBLICANS in all-caps so many times, just add “not the Democratic establishment” to every one of those, and you’ll see what I’m going for. That’s all I’ll say about that while nerves are still understandably raw, but you get the picture.

← Britney Spears Loves Robert Downey Jr.'s 'Dolittle' | 'Women of Reddit, What is Something Men Do That They Think is Attractive But Really Isn't?' →