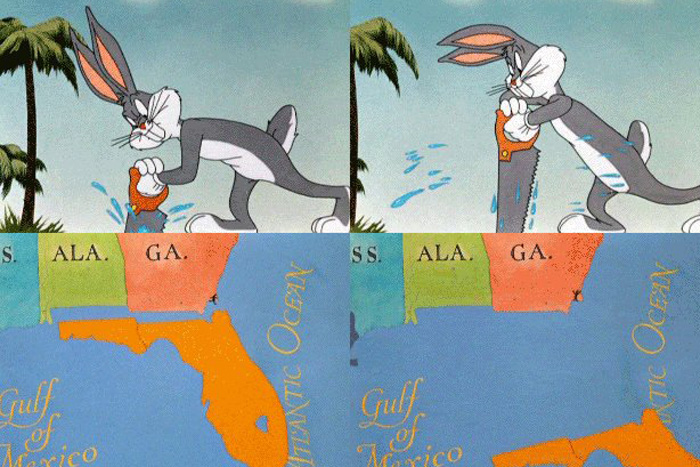 F*CKING FLORIDA — After dragging its feet and costing God knows how many lives in the process, this week, Florida finally joined the growing list of states that have issued statewide stay-at-home orders in order to slow the spread of the pandemic and prevent a crippling overload on healthcare facilities. Granted, this comes after weeks of crowded beaches, viral videos of spring breakers boasting about their ox-like immune systems, and general disregard for public safety from Boomers who still want to get their dinner parties on. To beat a cliche to death, Florida really went for that big “Mayor from Jaws” energy, which was even more breathtaking for a retirement state full of the exact demographic this virus drops like flies.

Of course, like any red state worth its weight in goddammit, Florida has reportedly added a religious exemption to its stay-at-home orders thanks to Gov. Ron DeSantis throwing a rotting bucket of red meat to his conservative base by deeming church services an “essential activity.” We’re not talking about online services here. We’re talking full-on, “come in, have a seat in the pew” services, which are now openly welcomed in the state of Florida.

As I’ve written about before, The River at Tampa Bay Church has been making headlines thanks to Pastor Rodney Howard-Browne not only holding services at his megachurch, but encouraging people to shake hands to stick it to the godless media, or whatever. After pulling this stunt last Sunday, Howard-Browne was arrested and fined, which has already prompted one nutjob in my home state of PA to host a Woodstock-like gathering of evangelicals on Easter Sunday in protest.

In light of this new exception, Howard-Browne’s arrest now seems pointless, and even worse, he’s basically been handed a gilded invitation from the state to keep being an ecclesiastical asshat, which Rachel Maddow noted last night.

“It turns out, after the governor signed his stay-at-home order, he then signed a second order right after the first one, and the second order said his new rule would supersede any rule put in place by any Florida county or city or town, that was stricter in any way, than the rule he had set in place statewide,” Maddow reported. “He was overriding any more aggressive measures taken by localities in the state.”

“So what the Florida governor has just done may result in the Tampa Bay coronavirus denying mega-church guy, being back on for his kill-them-all, super-spreader megachurch services,” Maddow concluded.”

And, sure enough, Howard-Browne is already eyeing up a big Easter service. After initially announcing that he would be canceling Sunday Services at The River, he’s since his clarified that decision in a lengthy open letter about his arrest, which is full of all kinds of holy shit if you’re looking for an insane read to pass the time.

At this point, we believe it is prudent to take a pause by not opening the church doors this Sunday. This will allow an opportunity for people to take a deep breath and calm down. No matter your view on this matter, I encourage you to take a step back and reconsider the options. I believe we can better balance the health and safety of our community without throwing out the Constitution.

At this time, I have not made any decision about Easter Sunday or services thereafter. Adonica and I are praying and seeking the Lord for wisdom. I will say, however, that the church cannot be closed indefinitely. We believe that there are less restrictive means available to balance all the various interests.

While Howard-Browne’s letter skews toward sounding like a calm, responsible pastor who’s clearly very concerned about the safety of his flock, again, this is a guy who encouraged people to shake hands in the face of every health directive pleading for people to stay six feet apart. On top of that, a very quick look at Howard-Browne’s Twitter account shows a pastor who is operating at intense MAGA-levels and, at this very moment, retweeting every single “the pandemic is fake news, open the economy” talking point he can get his hands on. I didn’t even have to scroll down before hitting these two right out of the gate.

It is becoming increasingly clear now that we have locked down the US economy to "prevent" COVID19 spread based on GROSSLY EXAGGERATED "model projections" that do not match reality.
Dr. Fauci himself admits that models are as good as their "assumptions".https://t.co/y03HQdMHpr pic.twitter.com/cSDqw0pu5k

So, yup, Howard-Browne is definitely a guy who’s going to make the responsible decision here based on medical science and a selfless regard for his fellow man. It’s like staring into the holy retweets of Christ himself.

← Arielle Charnas, Pandemic Influencers, and Dealing With our Anger | 5 Reasons You Must See 'Nailed It!' Season 4 →