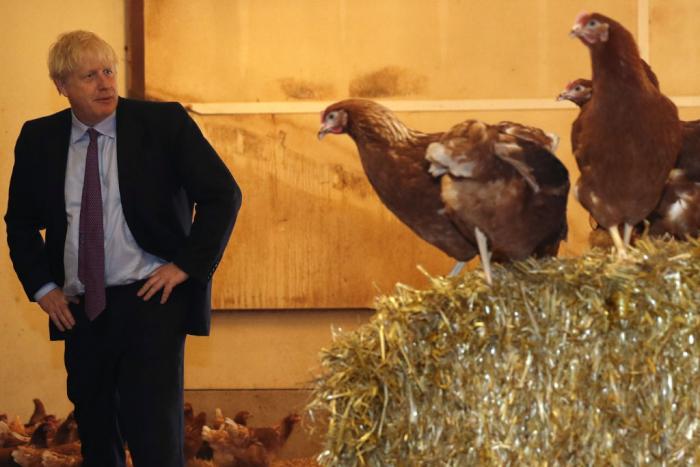 Will The British Parliament Be Able To Stop A No Deal Brexit?

A buffoon, an unelected Machiavel and a chocolate teapot walk into a bar. “I think we’ll have a constitutional crisis!” says the buffoon. “Do it!” whispers the Machiavel. “I would stop you but I’m rapidly losing structural integrity,” says the chocolate teapot. Suddenly, the pub turns into an inferno. The buffoon’s hair is on fire, but he thinks it makes him look like a manly Captain Marvel, so he’s quite excited. An Englishman, an Irishman and a Scotsman walk past. The Scotsman says to the Englishman, “This is your fault, you know.” The Irishman punches the Englishman in the face. The Englishman cries. The buffoon is still running around with his hair on fire. The Machiavel is doing an evil laugh. Suddenly, a stern nonagenarian wearing a fancy hat and a subversive brooch appears, driving a fire engine. “DO I HAVE TO FIX IT MYSELF?” she cries. Yes please, your Majesty. Yes, please.

Everything’s fine! Everything’s totally fine! I mean, we’re on the brink of something quite dramatic and the word ‘unprecedented’ is being bandied about like there’s no tomorrow (which might be true) but there’s nothing to see here! Honest!

Parliament may be on summer break, but the (current) Brexit deadline is less than three months away, and, well, things are a little up in the air to say the least. BoJo is still playing hardball waving his rattle around saying that there won’t be any doom and gloom if we think happy thoughts, but even if there is, it will be the EU’s fault, so there. His government is spending millions on No Deal propaganda and ‘keep calm’ leaflets. The pound is falling. The UK seems on the verge of splitting up. And the Big Brexit Clock ticks on…

The price of #Brexit: £66 billion and an impending recession - and that’s before we’ve even left!
https://t.co/sONNZZWymf

You generally don’t have to spend billions of pounds, suspend laws & stockpile essentials to mitigate the impact of *good* ideas.

There has got to come a point where people start being ashamed to say they knew what they voted for.

I mean…. Who would intentionally do this to their own country? https://t.co/wtmcQYHykG

"There’s about 10 days of food in total. The kind of disruption the government is talking about today… will lead to gaps on the shelves within a week.”

Former Sainsbury’s CEO Justin King tells @Emmabarnett why he thinks we should be worried about a no-deal Brexit pic.twitter.com/pyskbiu10S

Boris has warned that any attempt to stop him — or a No Deal Brexit — won’t work. He is bribing towns, cities and industries to try and win them over, and lying about what that money is and where it comes from.

I for one am amazed that an inveterate liar who lied about the NHS on a bus may not have been telling the whole truth about new money for the NHS. https://t.co/22888FA536

… Like having sawn off the patient’s good leg, trying to claim credit for supplying a wooden replacement https://t.co/ggTpM7QedI

At the Brecon and Radnorshire by-election, Remain parties worked together to take the seat back from the Tories. Plaid Cymru, the Greens and Change didn’t contest the seat, as the Lib Dems had the best chance to win it. The Brexit Party challenged the Tories and split the Leave vote. The Remain alliance won, and new leader of the Lib Dems, Jo Swinson, was triumphant. Boris’s majority is effectively down to 1. If he puts any Brexit plans to Parliament, he won’t win — the Tories are not united around the idea of a No Deal Brexit; a decent number of them would vote against the government. So guess what? He’s not going to involve Parliament.

If you can’t fight the Prime Minister’s plan, you have to fight the Prime Minister’s leadership. Swinson’s attempt to call for a vote of no confidence in Boris before the break was unsuccessful; Corbyn wasn’t keen to act on it just yet. There are suggestions that a no-confidence vote will happen when Parliament returns in September instead. By then, we can assume that even more Tories will be prepared to vote against the government. If this happens, and the government is voted down, things get complicated.

For starters, Parliament would have 14 days to put forward an alternative government. If a party cannot cobble together a majority, or an alternative arrangement is not forthcoming, a general election would be called. So far so good? Right. That’s the easy bit. The devil is in the details.

There is theoretically enough time to have a general election before the Brexit deadline. But that might not change any of the parliamentary arithmetic, and then we are back where we started, but with even less time. Tick tock.

If Boris loses a confidence vote, but an alternative arrangement can’t be found, he is under no legal obligation to resign. He could call a general election, and just set the date of this for after the Brexit deadline. Dominic Cummings is adamant; Boris won’t go quietly. Keep an eye on the Battle of the Dominics — the unelected Machiavel Cummings on one side versus the MP and former judge Dominic Grieve on the other.

"Mr Grieve will see what he's right about"

Some Tories would vote down their own government, but would not support a Corbyn-led alternative. They might support someone else though; further speculation has been rife for potential candidates who would appeal to a large cross-section of the House, with the appropriate gravitas for the role and no ambition to hang on to it permanently. That leads us to the potential Government of National Unity — a kind of temporary emergency measure whereby MPs from across different parties work together in the national interest.

Who would be involved? There isn’t a majority for No Deal; we know this from the indicative votes. If the anti No Deal people came together, they could prevent a crash out on Halloween. This would involve moderates from Labour and the Tories, the SNP, the Lib Dems, Greens, Change, Plaid Cymru and some other independents. There is even a very interesting idea being proposed in relation to the Sinn Féin MPs who do not attend Parliament. It’s all very fiddly, but the important thing is to remember that on their own, neither Boris nor Corbyn has the numbers to win the confidence of the House; Team Anti No Deal does, in theory. So let’s run this scenario: there’s a confidence vote, Boris loses, a Government of National Unity takes over and prevents No Deal by extending the deadline or revoking Article 50, then calls a general election without the Big Clock bearing down on everyone. That could work, right?

Well, there’s just one teeny-tiny problem with that, and that’s the chocolate teapot currently leading the Opposition. Only the Leader of the Opposition can table a vote of no confidence. Corbyn would have to make a move to topple Boris, and soon. Secondly, Team Anti No Deal needs Labour MPs to get the numbers for a Government of National Unity, and Labour have already said that they won’t countenance a plan like this unless Corbyn is in charge — in which case, moderate Tories are out and the whole plan crumbles.

Labour's price for backing a Government of National Unity to Stop No Deal seems to that it is led by Corbyn - a man who can't command unity in his own Party and has refused to back cross party attempts to stop No Deal.

This is, even by Labour's standards, cynical beyond belief

They don’t really want a Government of National Unity… Take a wild guess at what they want. Go on. I’ll wait. He only mentions it roughly once a minute. Yay! You guessed it! A general election. But like I said above, if Boris is the one calling for a general election, he could easily set it for after Brexit. There’s a slim chance he would do it before, if he thinks he can boost his majority, but the Brecon by-election might be a stark warning against that.

For Team Anti No Deal, a post-Brexit election is obviously too late. But was this the plan all along? Break everything completely and then build it back up however you want? Is this something that Boris and Corbyn would both benefit from? Is the UK stuck between disaster capitalism and disaster socialism?

Are there now two groups in UK politics rather relishing the prospect of a ‘no deal Brexit’ so they can inherit the chaotic aftermath and reshape the country in their own image?
And are these two groups currently running our two major parties?

Is the Queen really going to have to weigh in, and threaten to clip them round the ear unless Boris’s team stops acting like Machiavelli’s less trustworthy cousins, and Corbyn stops dithering?

Brexit is already a looming national crisis, but we may hit a constitutional crisis before then, the likes of which we haven’t had for hundreds of years. Last time something like this happened, a king lost his head and Christmas was canceled, for like 10 years. High stakes, folks. And the Prime Minister is just playing chicken. Tick tock.

← 'Game of Thrones' Creators David Benioff & D.B. Weiss Sign 9 Figure Overall Deal With Netflix | The MCU is Not My Cup of Tea. This Fan Supercut, However, is Incredible →