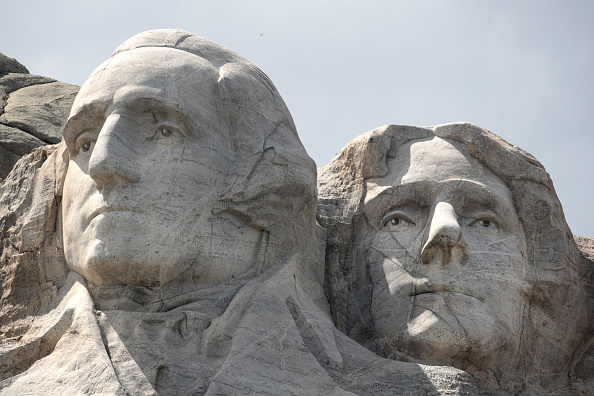 Don't Worry: Even If He Weren't the Worst President in American History, Trump Couldn't Add His Face to Mt. Rushmore

Over the weekend, the NYTimes — in reporting on the ambitions of South Dakota Gov. Kristi Noem — wrote:

After all, the president had told Noem in the Oval Office that he aspired to have his image etched on [Mt. Rushmore]. And last year, a White House aide reached out to the governor’s office with a question, according to a Republican official familiar with the conversation: What’s the process to add additional presidents to Mount Rushmore?

The piece goes on to say that, in an attempt to flatter Trump, Noem mocked up a Mt. Rushmore replica that included Donald Trump, and after Trump’s 4th of July speech set against the Mt. Rushmore backdrop, Noem travelled back on Air Force One with the President, fueling speculation that Trump might replace Mike Pence on the ticket with Noem (egos being as fragile as they are in the Trump administration, Noem had to return three weeks later to put Pence’s mind at ease).

In any respect, this morning, Trump is denying the NYTimes’ reporting in a way that obviously suggests that inquiring about how to put his face on Rushmore is exactly what he did:

This is Fake News by the failing @nytimes & bad ratings @CNN. Never suggested it although, based on all of the many things accomplished during the first 3 1/2 years, perhaps more than any other Presidency, sounds like a good idea to me! https://t.co/EHrA9yUsAw

He also tweeted out this, to ensure our continued nightmares.

For the record, however, we need not worry about Trump’s face — or anyone else’s — ever being added to the monument. There is no more carve-able rock available, for one thing, and for another, the artist who designed Mt. Rushmore, Gutzon Borglum, did so with the intent of representing America’s first 150 years. Trump, Reagan, Obama, or JFK, etc., would thus never qualify for addition. Mt. Rushmore is fixed.


← Watch: Netflix's 'Away' Trailer Will Yank Out Your Heartstrings and Beat You With Them | Rest in Noise, Martin Birch →