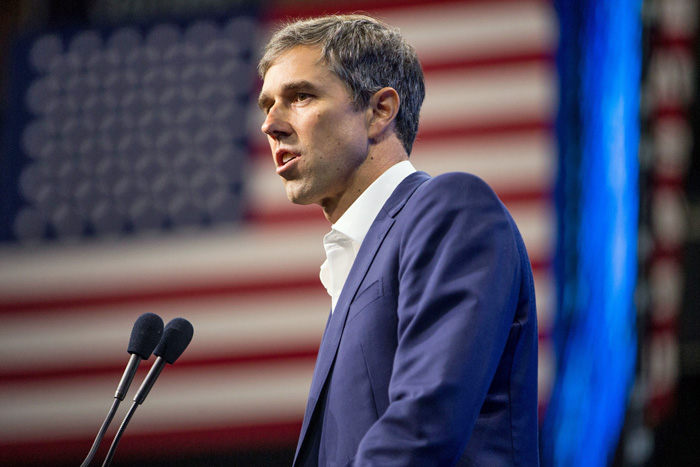 You really gotta hand it to Beto O’Rourke for transforming his campaign from the guy who hops a skateboard onto tables and says, “Nothing shreds harder than the right to vote,” to the righteously angry guy who’s going to take the f*cking sh*t out of your guns. Gimmick or not, it’s a bold move to paint a target on your back as the (long overdue) gun-grabbing candidate, and I agree with Carlos Maza’s assessment of how Beto is changing the conversation.

Can’t overstate how valuable it is to have a major presidential candidate say “yes, we’re taking your guns.” Raises the bar for all other dems. Makes the “gotcha” question feel outdated. Reframes the whole debate in the right direction.

For those of you who missed it, here was Beto’s big moment in the third Democratic debate when he was asked if he’s seriously proposing to take away guns and how that would work.

When we see that being used against children, and in Odessa, I met the mother of a 15-year-old girl who was shot by an AR-15, and that mother watched her bleed to death over the course of an hour because so many other people were shot by that AR-15 in Odessa and Midland, there weren’t enough ambulances to get to them in time. Hell, yes, we’re going to take your AR-15, your AK-47. We’re not going to allow it to be used against our fellow Americans anymore.”

Because America is a murderbox of dumb, Beto was immediately met with resistance by the large swaths of potential mass shooters peppered throughout this supposedly great nation of ours. One of those brain geniuses is Texas State Representative Briscoe Cain, who managed to get himself reported to the FBI after very clearly threatening a presidential candidate in a now-deleted tweet.

This is a death threat, Representative. Clearly, you shouldn't own an AR-15—and neither should anyone else. pic.twitter.com/jsiZmwjMDs

If you’re thinking to yourself, wait a minute, didn’t a daytime talk show host recently endorse murdering the government if they try to take your guns? Why, yes, Meghan McCain did. I’m glad you asked.

Not knowing when to quit, Briscoe fired back with “You’re a child Robert Francis,” which is clearly a sick burn coming from a guy who definitely looks like a grown man and not Texas’ first tween politician. Why do people keep saying that? 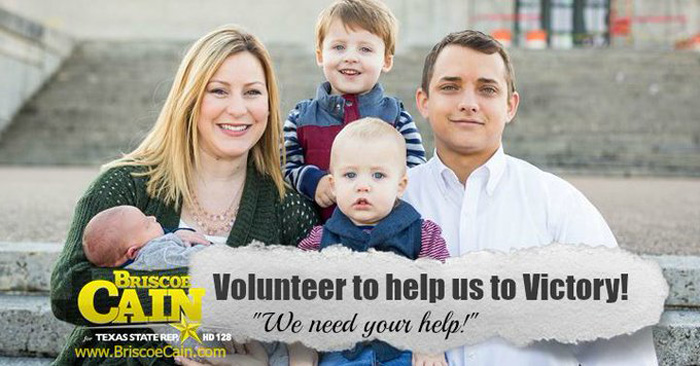 You’ll also be surprised to learn that the Beto threat wasn’t Briscoe’s first rodeo with proving he needs to stop playing around with peepaw’s gun. Last year, he crashed a state Democratic convention and tried to pass around fake gun control signs to own the libs or some shit. When he got caught, the idiot flashed a gun and was captured on video doing it. In fact, here’s a screengrab from the Fort Worth Star-Telegram, and someone tell me to my face that this isn’t a 12-year-old. I dare you. 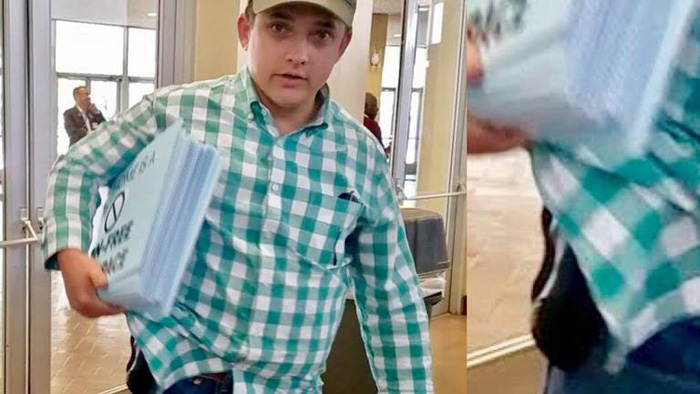 Naturally, Briscoe wasn’t the only manly man on the Right to come after Beto. The morning after the debate, Fox and Friends brought on veteran Johnny “Joey” Jones, who made a very weird proclamation about Beto’s efforts.

“No, you won’t, Beto,” Jones replied. “No, you won’t. You couldn’t take my girl and you haven’t earned my respect. How are you going to take my guns? That’s my response there.”

Did Beto try to f*ck this dude’s wife? What just happened here? I Googled my ass off, and I can’t find what the hell this guy is talking about.

After agreeing with Trump’s ban on bump stocks, because God knows he’s watching with five Egg McMuffins crammed in his cheeks, Jones offered his solution for our country’s gun problems, and it’s… *checks notes*… putting more brown and poor people in prison. Has this guy even been to America? That’s literally all we do. It’s our signature move at this point.

“The second thing I would do is I would love to have law enforcement in every city in this country have the ability to throw the book at people that commit gun crime instead of using things like their ethnic background or low income as reasons for them not to go to jail,” Jones opined. “Those things are things we can fix through other programs. People that are of a certain race should never be targeted. But to use that as a reason to not put someone in jail who has used a gun in a crime makes no sense.”

Here’s what I love about these gun-humping idiots. They’re always the first to crow about Blue Lives Matter and how Colin Kaepernick is a terrorist who hates the troops — Christ, Jones is literally a former Marine talking up the police — but when it comes to the second amendment, do these assholes realize what they’re saying when they start mouthing off about protecting themselves from tyranny?

The right to bear arms is not about hunting.

It is a natural right of the deepest significance to the relationship between citizen and state.

It is in the Constitution because the men who defeated the greatest empire in the world wanted us to be able to defend our freedom.

If assault weapons are banned, who do these f*ckers honestly think they’re going to be shooting at? Because I’ll give you a hint: It’s cops or troops. Those American heroes you can’t shut up about and worship as infallible gods among men? You’re threatening to murder them in the face. Granted, the odds are pretty high that they’ll squash you like an inbred bug, that still doesn’t change the fact that you literally fantasize about putting a bullet in some Blue Lives just so you can keep hearing that pew-pew sound down by the crick even if it turns every public place in America into a goddamn warzone.

You guys are true patriots.

← How Many Episodes Are Left of USA Network's 'Suits'? | 'BH90210' Finale Explained: Why is Shannen Doherty Covered in Blood? Is 'The OC' Getting a Reboot? →