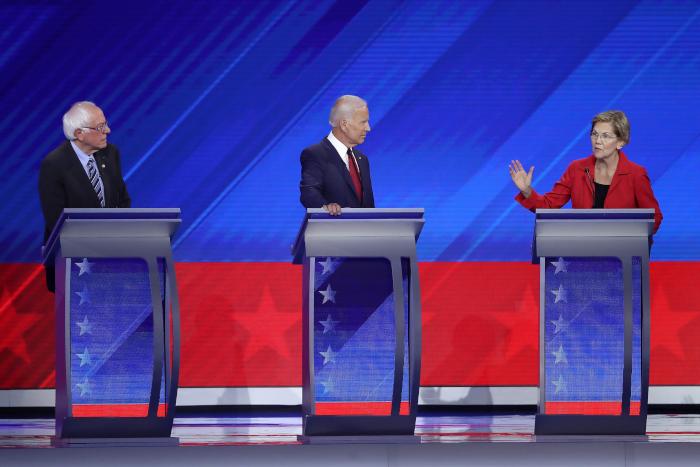 Winners and Losers from the Third Democratic Debate

Last night’s Democratic debate on ABC was the first in six weeks, and the first with the new, slightly higher requirements to make the debate stage, which means we got all ten qualifying candidates on the same stage for the first time (although apparently Tom Steyer has already qualified for the next one, meaning in October we’ll be back to two debates, albeit with fewer people on stage).

If you came here hoping for Dustin’s well-reasoned analysis of what happened, sorry to disappoint you, but he decided to go see a movie or something, which means you’re stuck with me and whatever random thoughts my brain was able to cobble together, but here goes:

The short version of this is that this debate absolutely did not matter, other than to make us forget about the candidates who did not make the stage (and that part was effective — if you told me to name all the candidates who didn’t make the stage that are still in the race, I can give you Gabbard, Williamson, Steyer, and then I have absolutely no idea). Nobody stood out in particular (except for a couple of random moments which I’ll highlight below), and if you came in with a preference already, you’re probably still leaving with that same preference.

Anyway, on to the Winners and Losers!

WINNER: People watching who are glad they don’t have to watch two debates back to back.

WINNER: America, for not being subjected to more Marianne Williamson.

WINNER: Andrew Yang, who managed to make a splash at the beginning of the debate (which was teased earlier) by announcing that his campaign is running a contest to give 10 people his $1000 monthly dividend for a year, paid out from campaign funds, which sounds… fuzzy on the legality, but it’ll get more people to sign up for his mailing list.

LOSER: Andrew Yang, for his lame “I’m Asian, I know a lot of doctors” joke, a comedic setback which is especially painful coming on the same day that SNL added its first Asian cast member.

LOSER: Bernie Sanders’ ENT Doctor — I don’t know if he had a cold or what, but he sounded like my grandpa he needed to clear his throat all night.

WINNER: People who like to talk about “political lanes,” as the “moderates” (specifically Klobuchar, Buttigieg, and Biden) went after the “progressives” (Sanders and Warren) pretty consistently.

LOSER: Anyone hoping to learn much of substance on any of the available subjects — and look, it’s probably impossible to have a real, nuanced discussion in this format, with this many people jumping back and forth, but I really feel like I didn’t hear anything particularly new or surprising.

WINNER: Julian Castro, who made his biggest splash thus far when he took his best shot at Joe Biden, with aggressive arguments as well as a barely-veiled jab at Biden’s age.

LOSER: Julian Castro’s chances at getting support from “the establishment.”

WINNER: Beto O’Rourke, when he was given a chance to speak on gun control, an issue that he’s been incredibly forceful about.

LOSER: Beto O’Rourke, who was for some reason given the first chance to speak on racism, gave a fine prepared answer, and then was subsequently topped by Castro, Booker, and pretty much everyone else.

LOSER: The phrase “let’s be clear,” which was said by everyone about eighty million times. It’s the “to be fair” of Democratic debates, except they refuse to harmonize.

WINNER: The moderators, who were generally polite and didn’t really inject themselves into the debate (this is known in the moderator business as a “reverse Chuck Todd”).

LOSER: The moderators, who were generally polite to the point that it would almost always take 2-3 tries to stop anyone not named Joe Biden from speaking (even Biden decided to demand his time, as he said he was going to keep going over, like everyone else).

WINNER: Everyone watching, when the debate ended at 10:45 (eastern), a full FIFTEEN MINUTES AHEAD OF SCHEDULE. WOO!

LOSER: Everyone watching, who spent almost three hours to end up in (probably) the same exact spot as before.