Yesterday, Saturday Night Live announced three new cast members. The first wave of reactions was celebrating the casting of Bowen Yang, who is hilarious and making history as an openly gay comedian and the first East Asian performer cast in the show’s 45 years. However, the second wave focused on the casting of Shane Gillis, as a video surfaced of the white comedian making blatantly racist comments and about Asian people.

today SNL announced the hiring of its first cast member of East Asian descent, and also this guy pic.twitter.com/0FAGJZJUkK

The excerpt above comes from a 2018 episode of Gillis’s podcast with Matt McCusker, Matt and Shane’s Secret Podcast. In it, the pair mock Chinatown, and Gillis employs a racial slur, saying, “Let the f*cking chinks live there.” They go on to mock the decor, the food, and the accents of the Chinese. And there’s more.

this, again, is from September 2018 pic.twitter.com/inYFT22zjl

As these videos went viral, outrage sparked calls for Gillis to be fired from Saturday Night Live.

I started covering SNL professionally in 2010 and I’ve had a strict rule I NEVER comment publicly about cast members’ future employment status because it didn’t seem fair. But Shane Gillis is now the exception. Completely unacceptable and he needs to be dismissed immediately.

Sorry to pile on but both of these guys are fucking assholes. SNL should rescind its hiring of Gillis. https://t.co/761jTnRXRy

And it’s not just this one podcast ep.

Vulture did some digging. They found other bigoted comments from Gillis’s podcast, including a segment where the co-hosts ranked the funniness of comedians based on their race, gender, and sexual orientation. There, Gillis declared, “White chicks are literally at the bottom.” So, I guess we know what he thinks about fellow newly minted cast member Chloe Fineman.

Vulture also spoke with Gillis’s former colleagues in Philadephia, who were disturbed by his SNL success. Kate Banford, co-owner of Good Good Comedy Theatre, told the outlet that she stopped booking Gillis “because of racist, homophobic, and sexist things he’s said on and offstage.”

Basically, the uproar can’t be excused as a careless remark on a hot mic, a decade-old bit, or some thoughtless tweets. This is Gillis’s brand. NOW. It seems impossible for SNL to have missed that. Perhaps they feel like Gillis will appeal to the MAGA crowd, and as such Gillis can be a balance to hiring a woman and a gay man of color? Maybe this is what diversity looks like to SNL.

Gillis offered a statement by the end of the day. Predictably, it tries to frame his racist, sexist, and homophobic remarks as just jokes. And then, of course, he offers a non-apology that implies few were actually offended. He suggests that the Twitter reaction is not genuine outrage but performative virtue signaling. Classy, Shane. 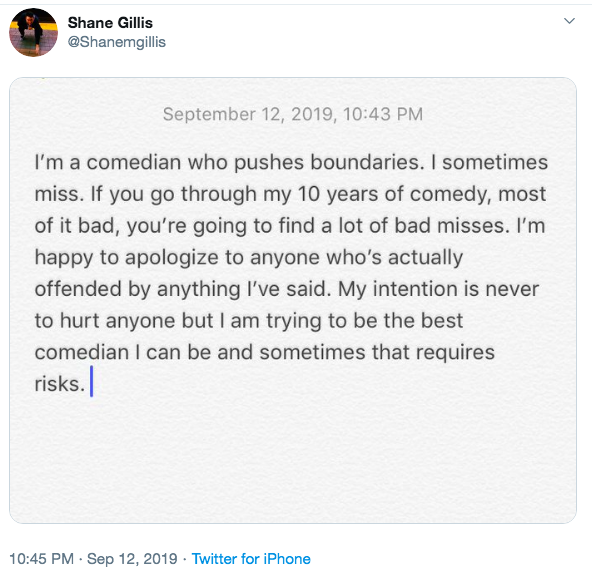 Here’s the thing. Gillis wasn’t cracking jokes. He was in conversation, a conversation with another white guy in which they acknowledge they are being racist, a conversation in which they gleefully stoke each other’s racism. He wasn’t pushing boundaries, being “edgy” and taking “risks.” He was giving voice to the white supremacy and misogyny that’s a major force in America today. He was trumping it up. He’s not sorry. He’s just sorry that the snowflakes he’s subtweeting might mar his career.

It’s uncertain how Saturday Night Live will respond to this controversy. The show has ignored some pretty atrocious behavior from its cast before. So, will this paltry apology be enough for SNL to consider the matter closed? Will they fire Gillis before season 45 kicks off October 5? Or will they bump him to the tiny bit parts and hope this blows over?