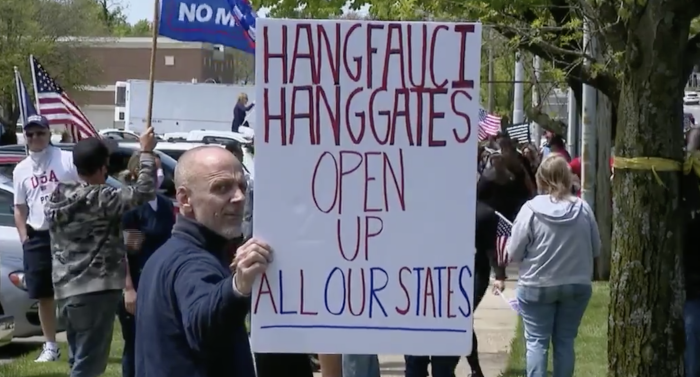 Yesterday, Wisconsin re-opened its bars after the conservative state Supreme Court struck down the governor’s emergency lockdown order. Within an hour, some bars were packed.

45 minutes after the bars open in Wisconsin…. pic.twitter.com/xqaDlS6ajP

Elsewhere around the country — largely in red states — governors are re-opening the economies and restaurants, barbershops, and retail outlets, and some of those small businesses are throwing their doors back open. Maybe it’ll work! Science and public health officials suggest otherwise, but hey! Maybe Brian Kemp and Ron DeSantis know something we don’t! Or maybe with enough magical thinking, the virus will … disappear!

I would love that. No kidding. I would love if these protestors who are trying to re-open economies all survived the Coronavirus and proved the rest of us wrong.

In the meantime, reporters — local and national — are just out there doing their jobs, or at least those who still have a job. You know who else desperately wants the virus to magically disappear the economy to open back up? Journalists. News publications. Entertainment and political writers. Why? Well, because right now, 100,000 clicks and 1,000 clicks are worth roughly the same, which is nothing.

But this is what reporters like Kevin Vesey of News 12, Long Island have to face when covering protestors rallying to re-open the economy. It’s legit terrifying.

The level of anger directed at the media from these protestors was alarming. As always, I will tell a fair and unbiased story today. pic.twitter.com/5jCR0YY9VH

TENSE MOMENTS: While covering a reopening rally on Long Island, our @KevinVesey was confronted by several angry protestors.


I'll probably never forget what happened today.
I was insulted. I was berated. I was practically chased by people who refused to wear masks in the middle of a pandemic.
All the while, I was there to tell THEIR story. Here's the finished product. pic.twitter.com/HV2Hrcs7gi


We live in truly scary times, and I’m afraid that’s not going to change anytime soon, no matter who is President. We’ve been trying to adjust to a “new normal” since 2016, but I will never get used to how much Trump supporters hate journalists for doing their job.

← 5 Shows After Dark: 'How to Get Away With Murder' Series Finale ABC, 'Station 19' Third Season Finale | Mary-Kate Olsen's Divorce is Off to a Nasty Start →