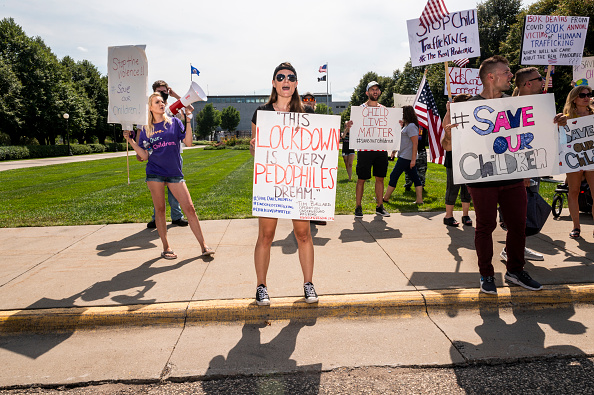 We Are So Screwed #SavetheChildren

On a cigarette break outside their small business in Ozaukee County [Wisconsin], Tina Arthur and Marcella Frank told me they plan to vote for Trump again because they are deeply alarmed by “the cabal.” They’ve heard “numerous reports” that the COVID-19 tents set up in New York and California were actually for children who had been rescued from underground sex-trafficking tunnels.

Arthur and Frank explained they’re not followers of QAnon. Frank says she spends most of her free time researching child sex trafficking, while Arthur adds that she often finds this information on the Russian-owned search engine Yandex. Frank’s eyes fill with tears as she describes what she’s found: children who are being raped and tortured so that “the cabal” can “extract their blood and drink it.” She says Trump has seized the blood on the black market as part of his fight against the cabal. “I think if Biden wins, the world is over, basically,” adds Arthur. “I would honestly try to leave the country. And if that wasn’t an option, I would probably take my children and sit in the garage and turn my car on and it would be over.”

This woman believes what she is saying with 100 percent of his heart. There’s not a Bob Woodward book in the world that could dissuade either of them of their opinion. These are the same people who are attacking Netflix and the Obamas for a film they have never seen, Cuties, who believe that Hillary Clinton and John Podesta used a pizza place as a front for a child-sex ring; who believe that Wayfair traffics children in its furniture.

Relative to other conspiracy theories, women — and mothers, in particular — also seem especially susceptible to the delusion, according to the NYTimes:

“I do think that there is something about the intense focus on harm being done to children and the graphic nature of the images and videos associated with Q” — including photos of children with black eyes or badly bruised bodies — “that is catered toward evoking shock and empathy, and it’s possible that these are chiming with a lot of women in particular,” said Blyth Crawford, a research fellow at the International Center for the Study of Radicalization in London.

In fact, QAnon uses the hashtag #SavetheChildren to evoke that sympathy and draw them in:

“To be clear, these events were QAnon rallies that camouflaged their QAnon roots by emphasizing a broad, abstract anti-human trafficking and anti-pedophilia message,” said Travis View, co-host of the podcast “QAnon Anonymous,” in an Aug. 26 episode. “But the point is to draw in people with an inoffensive, easy-to-swallow message and then red-pill them with the more deranged QAnon and Pizzagate stuff.”

The delusion, however, is straight out of the Nazi playbook, a repackaged conspiracy theory that dates back to The Protocols of the Elders of Zion in 1902, which spins basically the exact same narrative:

A secret cabal is taking over the world. They kidnap children, slaughter, and eat them to gain power from their blood. They control high positions in government, banks, international finance, the news media, and the church. They want to disarm the police. They promote homosexuality and pedophilia. They plan to mongrelize the white race so it will lose its essential power.

Last week, Buzzfeed made the decision to stop referring to QAnon as a “conspiracy theory” and start referring to it as a “collective delusion.” I think that’s accurate, although a “deranged collective delusion” is probably more appropriate. This is where bad actors, disinformation, and social media has led us, and if you are wondering why so many people in America are so easily manipulated into believing in “the cabal,” this — from the latest Social Progress Index — explains it: “The United States ranks No. 1 in the world in quality of universities, but No. 91 in access to quality basic education … kids in the United States get an education roughly on par with what children get in Uzbekistan and Mongolia.”

Experts who follow disinformation say nothing will change until Facebook and YouTube shift their business model away from the algorithms that reward conspiracies. “We are not anywhere near peak crazy,” says Mele. Phillips, the professor from Syracuse, agrees that things will get weirder. “We’re in trouble,” she adds. “Words sort of fail to capture what a nightmare scenario this is.”

These people are immune to the news cycle. These people fall into these insane rabbit holes, and when they resurface, they only believe what reinforces their own beliefs. It’s why Tucker Carlson is the top-rated show on cable television right now. Tucker Carlson is straight-up exploiting this alternate reality not for political gain, but financial gain (Carlson is evil and racist, but he is not dumb, and he has always followed the money, which has meant rebranding himself every few years).