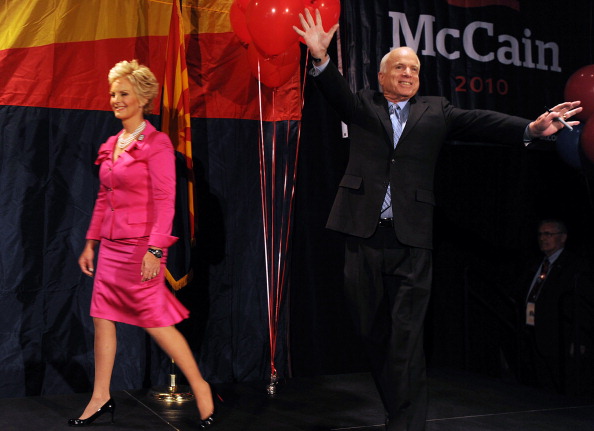 As many of you have seen, Steve Schmidt — a Republican political strategist who worked for George W. Bush, Arnold Schwarzenegger, and most notably, John McCain — was all over Twitter this weekend, dropping Twitter threads recounting the appalling, spoiled-brat behavior of Meghan McCain, as well as McCain’s ties to Russia. He went full scorched-earth, also detailing McCain’s boneheaded decision to select Sarah Palin as his running mate.

Late last night in a Substack post, however, Schmidt also provided a mea culpa, of sorts, for helping John McCain cover up a lengthy (alleged) affair he had with a lobbyist, an improper relationship that ultimately became the subject of a $27 million defamation suit against The New York Times. Steve Schmidt admitted that the New York Times got the story right.

I don’t know what it says about me, or McCain’s campaign, that I have no recollection of what Wikipedia calls the “John McCain lobbyist controversy.” The article surfacing the relationship came out in February of 2008, and I can only assume I was fixated on the then tight race between Barack Obama and Hillary Clinton, as it appears that McCain had all but wrapped up his nomination against Mitt Romney and Mike Huckabee.

The NYTimes article did not say that McCain had a romantic affair with lobbyist Vicki Iseman, but it strongly suggested as much, detailing the amount of time they spent together around the time of McCain’s first run for President in 2000 and the potentially unethical deals that McCain brokered that were related to Iseman’s lobbying activities.

“Convinced the relationship had become romantic,” the Times article read, “some of his top advisers intervened to protect the candidate from himself instructing staff members to block the woman’s access, privately warning her away and repeatedly confronting him, several people involved in the campaign said on the condition of anonymity.”

The Times got two anonymous sources to go on the record, saying that McCain had told them he had acted inappropriately with Iseman. “In interviews, the two former associates said they joined in a series of confrontations with Mr. McCain, warning him that he was risking his campaign and career. Both said Mr. McCain acknowledged behaving inappropriately and pledged to keep his distance from Ms. Iseman.”

According to Schmidt, had those sources used their names, McCain’s campaign would have been sunk. However, McCain — with Schmidt’s help — weathered the controversy, noting in a press conference that he and the lobbyist — 30 years his junior — were just “good friends.”

“For the next several months, there was not a single night that passed that I did not spend hours on the phone with a broken, distraught, and profoundly unstable lobbyist,” Schmidt wrote, referring to Iseman. “She screamed at me incoherently for hours every night. I became the shock absorber for her rage, anger and humiliation. I did this to protect John McCain and the campaign.

During my final call with the lobbyist, as she heard my young kids crying in the background, she told me that she wished that they could die so that I could share the depths of pain she felt when John McCain called her a “good friend” during his news conference denying the relationship.”

McCain thought the allegations would end his career, and though he initially denied the affair to Steve Schmidt, he eventually admitted it. “Boy, I had a long relationship with her,” he told Schmidt. Schmidt briefly quit the campaign as a result.

Vicki Iseman filed a $27 million defamation lawsuit against the Times in December 2008. It was settled three months later, with no money exchanging hands. The Times didn’t want to take it to trial because it would have gotten bogged down in a lengthy battle over whether a lobbyist was a “public” or “private” individual. The Times did issue a correction. In February 2009, the Times appended this correction: “The article did not state, and The Times did not intend to conclude, that Ms. Iseman had engaged in a romantic affair with Senator McCain or an unethical relationship on behalf of her clients in breach of the public trust.”

While not saying so outright, Schmidt — in apologizing to the journalists who wrote the piece — certainly seems to suggest that they were absolutely right to insinuate what the article originally suggested.