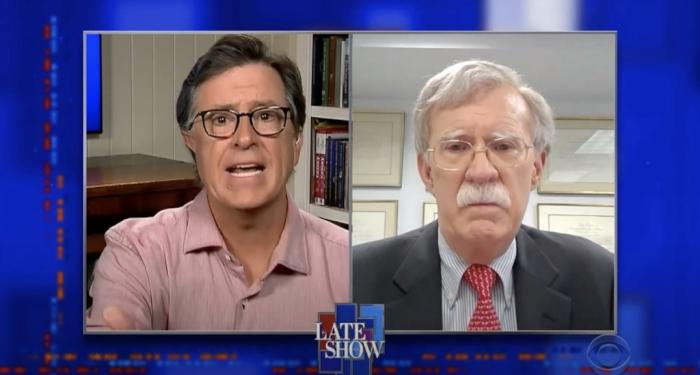 John Bolton appeared on The Late Show last night to promote his book, The Room Where It Happened (free PDF available on the Internet), and Colbert took an aggressive position with Bolton, repeatedly asking him why — if he was in “the room where it happened” — he didn’t provide that eyewitness testimony to the Senate during the impeachment hearings. Colbert likened Bolton’s testimony to the Watergate tapes, the thing that could have blown the case wide open.

Bolton, however, continued to shake off those accusations, blaming instead the Democrats for a flawed, partisan impeachment process. He suggested that Pelosi’s rush to impeach the President was no less political than Trump’s attempts to influence the election by leveraging Ukraine into investigating Joe Biden. Colbert insisted that was a false equivalency, but Bolton stood by his argument, even after Colbert likened Bolton’s refusal to testify to the trial of a serial killer.

“Because it was prosecuted poorly in your opinion, and too narrowly—isn’t that like someone saying, ‘I happen to know that this guy murdered a lot of people, but because they’re not prosecuting him as a serial killer, I don’t want to testify in this one murder that they found?’”

“Let me be clear about what the problem was. It wasn’t simply the scope. It was the way the House Democrats treated House Republicans,” Bolton said to Colbert. “I believe that there were some substantial number who would have been open to a fair consideration of a range of issues. That was never part of the Democratic plan. So that many Republicans who were no fans of Donald Trump ended up in the position of having to defend him. You can argue about whether that was right or wrong, but that’s the fact.”

Just to be clear here, there was absolutely no scenario in which the Republicans would have sided with the Democrats. The Democrats should have expanded the scope of the impeachment investigation — hell, it should have been a running impeachment process that is still ongoing — but recall that the Republicans were doing everything within their power to block the investigation, to prevent witnesses from speaking with the House, to discredit the proceedings by intentionally turning it into a circus. I will agree with Bolton on one point, however: It wouldn’t have mattered if he’d testified. The Republicans would have discredited his testimony, and they would have discredited Bolton, and it would not have been difficult to do so.

But he still should have testified.

Meanwhile, Colbert really goes after Bolton when Bolton seems to suggest that voting for Hillary or voting for Biden is a decision that’s just as bad as voting for Trump, even after all that Bolton has seen. “What could be worse than selling out to a hostile foreign power?” Colbert asks after Bolton suggests that the worst thing would be selling out to the left.

Colbert smoking Bolton is the content I’m here for. pic.twitter.com/rGu6tHSS4a

When Colbert calls Bolton — who negotiates with foreign powers for a living — “naive” for failing to appreciate how transparent Trump is, Bolton feels insulted, which more conservatives outlets apparently characterize as a “clapback.”

Watch that clip, and tell me where the “clapback” is.

Meanwhile, Bolton, for his part, has decided to vote for neither Biden nor Trump in November, which is certainly a position.