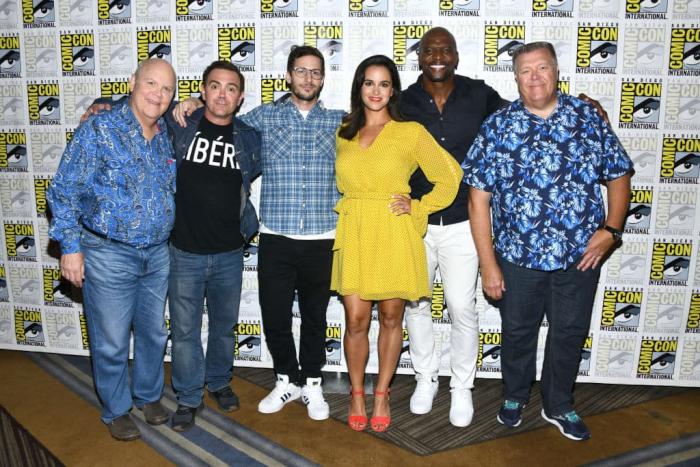 In the wake of George Floyd’s murder and the increased attention brought to the issue of police brutality in America, it’s no surprise that we have way less patience for copaganda in all its forms right now. Major networks have been forced to scramble for solutions and a semblance of self-awareness, which isn’t easy when you’ve spent decades using policing as the basis for hundreds of programs that helped to create a false image of cops as an almighty and incorruptible force for good at any cost. Shows like Live PD and Cops were pulled from the air and now there is a growing movement for Hollywood as a whole to extract itself from the propagandistic thrall of such narratives.

One show that has fallen under the harsh spotlight during these times is NBC’s Brooklyn Nine-Nine, the beloved and critically acclaimed comedy starring Andy Samberg, Terry Crews, and Andre Braugher. The series has run for seven seasons so far and won a variety of awards as well as praise for its diverse cast and take on serious issues. Still, just because people like the show and it does some things right, that doesn’t mean that it is exempt from the current conversations about copaganda and the rose-tinted portrayal of policing in American pop culture.

It’s something the cast and showrunners are clearly aware of, as they donated $100,000 to the National Bail Fund Network and expressed their support for Black Lives Matter. Now, the show is responding in more active ways. Terry Crews told Access Hollywood that several episodes of the upcoming eighth season had been binned in the wake of George Floyd’s death and the ongoing anti-racism protests:

‘We’ve had a lot of somber talks about it and deep conversations and we hope through this we’re going to make something that will be truly groundbreaking this year. We have an opportunity and we plan to use it in the best way possible. Our show-runner Dan Goor, they had four episodes all ready to go and they just threw them in the trash. We have to start over. Right now we don’t know which direction it’s going to go in.’

This sort of action has to be part of a long-term strategy and total paradigm shift in the world of entertainment, especially in terms of American mainstream television and cinema. When you’ve spent decades churning out stuff like Blue Bloods, Dick Wolf’s many franchises, or the entire CBS police procedural line-up, it’ll take a lot of work to undo those pernicious messages and deep-seated assumptions. This extends to confronting entertainment as a whole from an anti-racist stance. Just check out the sheer amount of comedy shows currently making Twitter apologies and pulling episodes because of racist jokes and literal blackface. This short-term action isn’t enough, not while the entertainment landscape is still uniformly white and the big money continues to go to that handful of people who perpetuate this nasty cycle. Here’s hoping real change continues and isn’t shelved by networks who get lazy and think it’s OK to do so because they think people have stopped paying attention.

← Stephen Colbert Takes John Bolton to Task for Not Testifying During the Impeachment | HBO's 'Perry Mason', 'Top Chef' Finale, and More on This Week's Podjiba! →