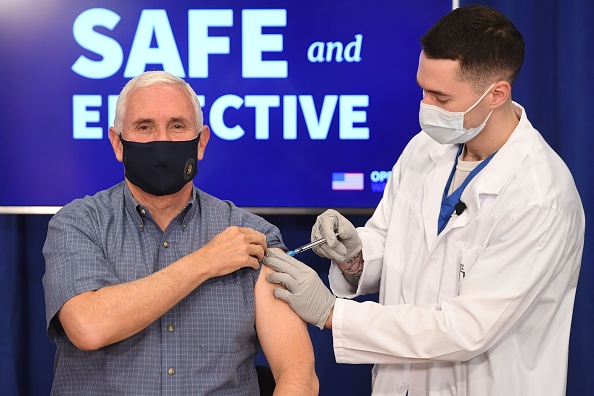 Operation Warp Speed's Distribution of the Vaccine Is Already a Disaster

Is there anything that the Trump Administration cannot f**k up? That dumb son of a bitch put all his eggs into the vaccine basket and now he can’t even roll it out appropriately. Not only did that stupid motherf**ker balk at securing enough Pfizer vaccine to immunize the entire country by April — risk free — now he can’t even get the doses he does have to the right place.

If you check your local news sources this morning, you’ll probably see a headline that says something along the line of, “State to receive 40 percent less vaccine than expected next week.” That’s the good headline, because the bad one is what you see in Florida, where the headline might say that vaccine shipments are “on hold.” (Sidebar: I just checked the Orlando Sentinel, and wow, they don’t like DeSantis).

The Trump Administration will tell you that the hold-up is because Pfizer is behind on production, but what Pfizer is saying is, “We have millions more doses sitting in our warehouse but, as of now, we have not received any shipment instructions for additional doses.”

That seems … bad. It’s a little bit like the fire department being called to put out a four-alarm fire, but nobody told them the address. It is infuriating to me because it’s not like the Administration didn’t have time to figure this one out. Trump, however, has disappeared. He’s devoted himself exclusively to election grievances, and given up entirely on governing, not that he did much before. But now? How is anyone supposed to get anything done when their boss spends all day melting down on Twitter and firing anyone who goes against him. It’s insanity!

📍Whoa—Pfizer says Trump admin has stopped giving destinations for “millions more doses sitting in our warehouses”. Trump HHS is allowing #COVID19 vaccines to *just sit there* unused. Is this—

1) Incompetence/negligence?
2) Throttling for 2nd dose?
3) Hoarding for other reason? pic.twitter.com/p7lsmpZSs8

I am so angry, but also “Throttling for 2nd dose?” What does that mean? The Administration is negotiating for more doses, and it looks like they might get another 50 million doses in the second quarter of 2021, but is it possible that this is a Trump negotiation tactic? Just let life-saving vaccines pile up in a warehouse in order to secure a deal on more vaccines? IS THIS THE GODDAMN ART OF THE DEAL?

The criminal incompetence of Trump is unreal, but even I had trouble believing this one was true. It Is. @Pfizer is pleading with @WhiteHouse, publicly. It's stocking vaccines in its warehouse because Trump wont tell them where to ship vaccines it ordered.https://t.co/4WJhFnGKQL

In Los Angeles County right now, two people are dying every hour of COVID, they have ordered an extra 5,000 body bags in California, and Trump is still sitting on millions of vaccine doses. There were 3,290 new deaths reported nationwide yesterday, there have been 1 million new infections in the last 5 days, and hospitals in one-third of America are at capacity … and yet, Alex Azar said yesterday, I shit you not, and these are his exact words: “I do wish we would stop just talking about this Pfizer thing.” You fahkin’ piece of shit. This Pfizer thing is the only thing you should be talking about until you can secure enough doses to vaccinate America and then distribute them where needed. GOD, the incompetence.

I will say that Donald Trump at least did something yesterday: He allowed his aides to talk him out of pressuring Republicans to increase direct payments in the COVID relief bills to $1,200 to $2,000 (as opposed to the $600 currently being negotiated). I’m sure that Trump just wanted his damn name on a big-ass check, but still, it’s a shame he let the GOP talk him out of it. It’s the one goddamn time when it would have been nice if his ego had won out.

Finally, I leave you with this. Yesterday, my son spilled water on our table, and he was like, “Oh no! Trump is yelling at me for spilling water on the table!” This is a picture of that water spill. 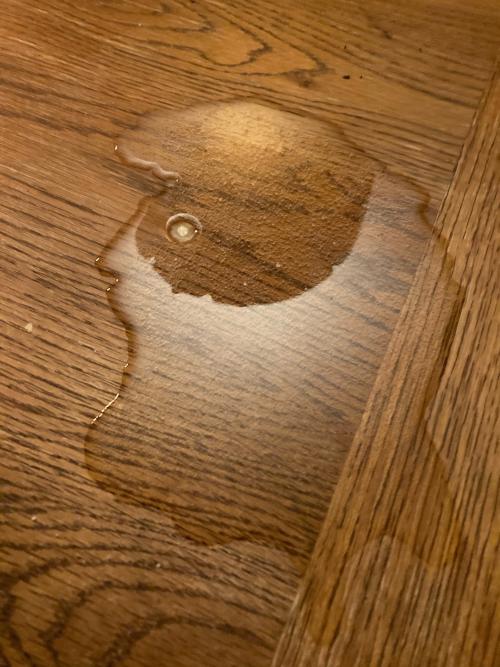