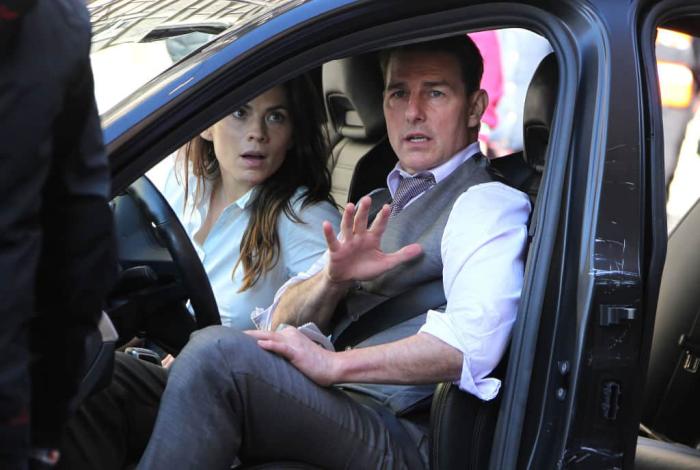 Tom Cruise has spent the past few years trying to avoid tabloid attention, and for good reason. He burned us all out during the height of TomKat and his formerly pristine reputation took a serious beating when his zealous Scientology support raised major scrutiny about the ‘church.’ That’s why he’s focused more on being the near-invincible leading man who seems beyond human.

Things returned to the weird old days of Cruise this week when a recording of Cruise going ballistic at crew-members on the set of Mission: Impossible 7 for breaking COVID-19 protocol went viral. Five crew members quit in response, and while some people were positive about his actions, it returned the focus to the reality of Cruise being, well, weird and culty. So, how do you fix that? I would imagine that a good old-fashioned romance rumor would get things moving along quite nicely.

According to a ‘source’ in The Sun, Cruise has become ‘fairly inseparable’ from his co-star Hayley Atwell. The 20 year age difference hasn’t put a damper on this rumored passion, with the newspaper claiming that ‘lockdown, and all the difficulties that came with it, brought them even closer. They’ve been meeting up after hours, and she’s been to his London pad. They get on brilliantly, and both seem very happy.’

Interesting. Vague. Not much else to go on, really. Still, it’s been a while since we’ve had a Cruise romance rumor. He’s mostly avoided them since divorcing Katie Holmes, aside from some very vague talk about him hanging out with other prominent Scientologists like Elisabeth Moss. Indeed, he’s shied away from those romantic leading man roles substantially in the past few years. Frankly, that was probably for the best given how prominent talk of his weird treatment of women and the supposed set-up that the Church of Scientology did between him and Holmes. It’s hard to buy him as just a regular dude who would ask a co-worker out to coffee without him taking a board meeting to iron out the kinks.

But let’s just take this story at face value for a second. The idea of 58-year old Tom Cruise (admittedly a deliberately very fresh-faced 58) pursuing a romance with his 38-year old co-star is some classic Hollywood love affair sh*t. It’s the kind of thing that gossip hounds like me would typically gobble up, but with Cruise, it’s hard to buy and also tough to overlook the thetan in the room. Personally, I do wonder how much of this is true and how much of it is Cruise’s team in spin mode. He’s had to maintain a pristine image of vaguely alien perfection for the past few years for a reason. The more he reveals about himself, the less people like him. You can’t shine away being part of an exploitative cult.

It’ll certainly make an interesting dinner party story for Atwell one day, if nothing else. Just say no to the personality test, Hayley.