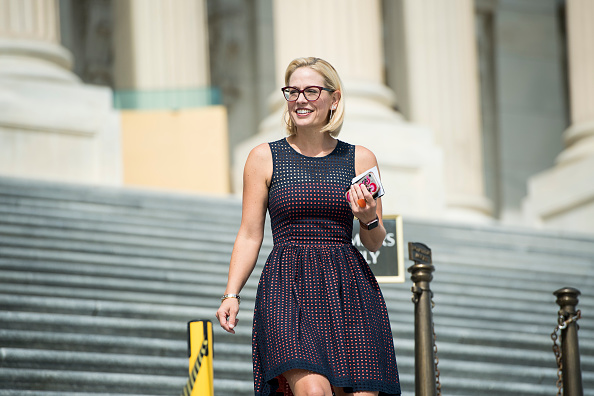 I don’t think that following a U.S. Senator into a bathroom stall is the preferred way to voice one’s concerns, but it says something when Stephen Miller — the ghoulish poster boy of internalized hatred — comes to your defense, as he has for Manic Pixie Lobbyists Dream Girl, Kyrsten Sinema. The Arizona Senator was followed into the bathroom at Arizona State University — where she teaches — by immigration activists, who calmly explained why she should support a pathway to citizenship.

Stephen Voldemiller came to Sinema’s defense, like a white knight (of the Ku Klux Klan), suggesting that the activist — who has lived in the United States since she was three years old — should be “swiftly deported” for advocating for herself and others similarly situated. Sinema might have given her the time of day — outside the confines of a public restroom — if only the activist had $5,000 to spend at one of Sinema’s fundraisers instead of merely knocking on doors to help get her elected.

An illegal alien is stalking a US Senator to demand passage of Biden’s reconciliation bill b/c it includes mass amnesty for illegals. In a functioning democracy, ICE would swiftly deport this person, but under Biden’s new edict (as the lawbreaker knows) she’s immune from removal. https://t.co/Be5y4itSMn

Elsewhere, I’m not sure why we needed a whistleblower to reveal the obvious, but former Facebook product manager Frances Haugen leaked thousands of documents showing that Facebook chooses money over the safety of its users.

“Facebook has realized that if they change the algorithm to be safer, people will spend less time on the site, they'll click on less ads, they'll make less money,” says Facebook whistleblower Frances Haugen. https://t.co/wbxxfgorNE pic.twitter.com/zpQIwcdatr

In all honesty, Facebook has been telling publishers for years that if we wanted more traction, the key metric is engagement, and most engagement comes from disagreement or anger. It’s why we only post to Facebook once or twice a day now — unless we’re deliberately trying to provoke anger, it doesn’t do much good to post anything other than those posts in which we’re trashing a movie or television show or talking shit about a celebrity. Guess which emojis the algorithm prefers:

Back in Congress, the progressive wing (and honestly, the rest of the Democratic party, save for Manchin and Sinema) continue to fight for the $3.5 trillion social policy bill. Last week, they stuck to their guns and refused to vote on the infrastructure bill until a deal was struck for the bill on paid family leave, climate change, and child care. One sticking point for Joe Manchin, apparently, is that he not only wants to shrink the cost of the bill by more than half, he also wants to strike the Hyde Amendment to ensure that the federal government does not fund abortions. That is a no-go for progressives (and should be for all Democrats).

In Trumpworld, Omarosa Manigault Newman has finally proven herself to be useful. After she published a tell-all book, Trump sued to enforce an NDA against her, and an arbitrator has ruled that the NDA was too expansive and vague to be enforceable. Trump not only lost the case but had to pay all of Omarosa’s fees. The important thing, however, is that this may open the floodgates — every MAGA world troglodyte may now crawl out of the woodwork to write a tell-all book knowing that the NDA they signed is unenforceable, not that most Trump supporters give a damn about how much negative press the man gets.

Finally, for those who want to talk sports, I had no idea who I would find myself rooting for in last night’s game between Tom Brady and the Bucs and Bill Belichick and the Patriots, since Brady is my least favorite player and the Patriots are my least favorite team. When I finally sat down and watched, however, my heart chose the Pats, who lost after Nick Folk doinked a 54-yard field goal in the game’s last minute. Damnit. Belichick’s sour face wasn’t worth the look of satisfaction on Brady’s dumb mug. Meanwhile, in Major League Baseball, the Red Sox and Yankees (ugh, ugh) clinched wild card berths and will face each other tomorrow in a play-in game for the playoffs. At least one of them will lose.


← Box Office Report: 'Venom: Let There Be Carnage' Dominate as 'Dear Evan Hansen' Plummets | John Oliver Wants You To Know That Man Made Forever Chemicals Are Already Inside You →