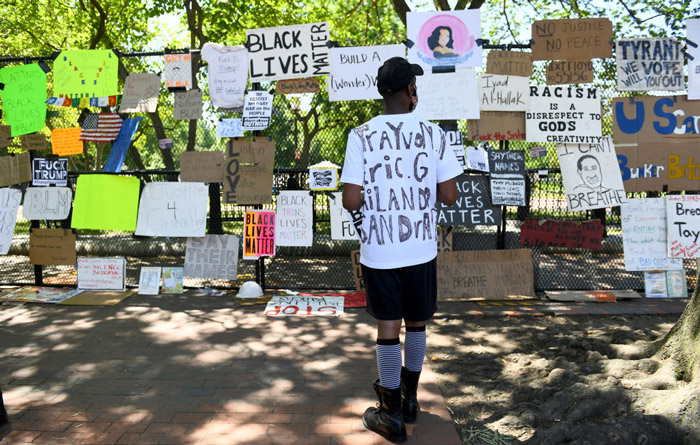 More Statues Commemorating Racists Are Coming Down, Thanks To Black Lives Matter Movement

The call to remove memorials of racists is getting renewed attention and worldwide action, thanks to the Black Lives Matter movement. For years, activists have been demanding to have such statues taken out of public spaces. Now, with Black Lives Matter protests gaining global notice once more, some of these statues are being torn down in rapid fashion either by government edict or by the demonstrators themselves.

Last week, we covered how activists have helped topple some racist landmarks in the U.S. This week, we’ve got new editions from across the country and across the Atlantic.

The statue of Confederate General Williams Carter Wickham in Monroe Park lays beside its base, covered in paint. pic.twitter.com/D6EgslhpS7

In former capital of the Confederacy, Richmond, Virginia, protesters toppled a statue of General Williams Carter Wickham. Erected in 1891, it stood atop a stone pedestal in Monroe Park. They did what even some of Wickham’s descendants could not, as the family urged the city in 2017 to take down this monument of a racist.

Also in Richmond, protesters have vandalized a towering statue of Confederate General, Robert E. Lee, but were unable to bring it down because of its massive size. However, Governor Ralph Northam has vowed to remove it “as soon as possible.”

“There are members in my family who are shaking in their boots. I’m sure my ancestor Robert E Lee is rolling in his grave and I say let him roll,” Robert Lee’s Fourth Great Nephew said in support of tearing the statue down. ⁦@NBC12⁩ pic.twitter.com/lxsjtXPVJF

Lee’s descendant, Reverand Robert W. Lee, IV, is completely on board with the statue’s destruction. The author of A Sin by Any Other Name: Reckoning With Racism and the Heritage of the South, Lee wrote an op-ed to this effect and spoke before the monument—which has been spraypainted in protests slogans—during a Black Lives Matter march. (WaPo)

JUST NOW: "Why would I go up close and personal with a Confederate monument?"

Wow! Richmond Mayor @LevarStoney tells me he had never been near the Robert E. Lee statue until this week. Why would he— he notes— as an African-American. Poignant@NewDaypic.twitter.com/xnxjxG9Uop

Richmond’s aforementioned mayor, could not make take down the Lee monument, because it is on state—not city—land. Of its impending removal, Stoney said, “As a 39-year-old Black man, the grandson of a housekeeper maid, and son of a janitor, I couldn’t be more proud.” (Reuters)

A before and after with the slave auction block in Fredericksburg. My family's roots stretch back to this district hundreds of years. This auction block is likely where my ancestors had been. As rich as the history is here, its removal paves the way for necessary change. pic.twitter.com/ETjQeT71hy

In Fredericksburg, Virginia, a 176-year-old slave auction block was finally removed from its place of commemoration on a public street corner. This removal was previously planned, thanks to NAACP efforts in 2017. In 2019, the City Council announced the 800-pound stone would be moved to Fredericksburg Area Museum. Then, businesses near the block’s location sued to stop this. That and the pandemic delayed the removal. However, with protesters vandalizing the stone and chanting “move the block,” it was at long last uprooted. (Mercury News)

Indianapolis will remove a monument dedicated to Confederate soldiers. The mayor called it a reminder of the "state's horrific embrace of the Ku Klux Klan a century ago."

The memorial was to be taken down in 2017 after protests, but the city hadn't secured funds at the time. pic.twitter.com/tW8VV1NxwL

In Indianapolis, Indiana, Mayor Joe Hogsett announced the destruction of a 35-foot monument dedicated to Confederate soldiers who’d died in the city’s Union prison camp during the Civil War. The monument was originally mounted in Greenlawn Cemetery in 1912 to mark the graves of 1,616 Confederate soldiers and sailors. In 1928, it was moved to the more public space of Garfield Park because of outcry from active KKK members. Plans for its removal began in 2017, but the city needed to allocate $50,000 to $100,000 for the project. The mayor promises it will be dismantled in soon. (Indy Star)

Here is a fun way to "contextualize" a racist statue. Orville Hubbard was notorious for keeping Dearborn (MI) a sundown town, as described in LIES ACROSS AMERICA as well as SUNDOWN TOWNS. https://t.co/snypfsQJyQ

Following a series of Black Lives Matter protests in the Detroit suburb of Dearborn, Michigan, the statue of former mayor Orville Hubbard, who held the position from 1942 to 1978, was removed from the campus of the Dearborn Historical Museum.

Campaigning with the platform “Keep Dearborn Clean,” Hubbard was a staunch segregationist who notoriously employed slurs and made Dearborn a Sundown town. In James W. Loewen’s book Sundown Towns, it was said of Hubbard, “as far as he was concerned, it was against the law for a Negro to live in his suburb.”

Dearborn’s descendants opposed the removal, so they will remount the statue at his gravesite. (Detroit Free Press, Metro Times, Wikipedia, wikipedia)

Breaking!! The city of Mobile has taken down the monument of Admiral Raphael Semmes on Government Street! pic.twitter.com/dcdh4KJ49w

Last Thursday in Mobile, Alabama, Mayor Sandy Stimpson had a statue of Admiral Raphael Semmes dismantled in the middle of the night. However, it seems this may not be a permanent measure. The removal came after the 1900-mounted memorial to the Confederate Navy officer was vandalized during protests last week. Stimpson’s statements have been ambiguous, calling the statue “a potential distraction.” However, City of Mobile spokesperson George Talbot says the removal is temporary.

On Saturday, protesters gathered at the statue’s remaining pedestal to push for its permanent dismantling. (NBC, Yellow Hammer)

Edward Colston statue pulled down by BLM protesters in Bristol. Colston was a 17th century slave trader who has numerous landmarks named after him in Bristol. #BlackLivesMattters #blmbristol #ukprotests pic.twitter.com/JEwk3qKJx2

Overseas in Bristol, England, protesters pulled down an 1895 statue of Edward Colston, a 17th-century merchant who made his fortune slave trading. The crowd cheered as the statue fell and broke, but they weren’t through. They dragged the slave-trader statue through the streets then chucked it off the docks into the murky waters below.

Protesters against systemic racism in the UK tore down a bronze statue depicting slave trader Edward Colston, rolling it through the streets before tossing it into the river. https://t.co/K1ZrZ65Nik pic.twitter.com/0n6gENEYhY

People in England just tore down a statue of slave trader Edward Colston and threw it in the river. The world has simply had it with racism.

This action has been condemned by UK’s Home Secretary, Priti Patel, who called the toppling “utterly disgraceful.” Meanwhile, a petition has been mounted to replace Colston’s statue with one of Paul Stephenson, a Black activist and OBE member who fought for Civil Rights in the 1960s. (CNN)

A crowd has climbed onto the statue of colonial King Léopold II in #Brussels chanting “murderer” and waving the flag of the Democratic Republic of Congo where his atrocities took place. #DRC 🇨🇩 #BlackLivesMatter pic.twitter.com/DIH9MGu39M

In Belgium, protests are sparking calls of the dismantling of statues honoring King Léopold II. The 19th-century royal was a merciless colonialist whose rule oversaw the deaths of millions of Black people in the African continent, including the Democratic Republic of Congo.

A petition has been mounted to take down a Léopold statue in Brussels. The hope is to topple it before June 30, so the 60th anniversary of Congolese independence can be celebrated without the bronzed eyes of a long-dead genocidal king looking down on them. Antwerp and Ghent have similar calls for action. (Africa Times, The Brussels Times, NPR)

Finally, let’s talk about the White House, an American landmark built in part by slave labor and currently housing one of the most dangerous anti-Black bigots in the world. No protesters have been able to get close enough to muss this monument. However, protesters and local politicians have used public art to support Black Lives Matter. (CNet)

Washington, D.C. Mayor Muriel Bowser commissioned local artists and city crews to paint “BLACK LIVES MATTER” on the two-lane street before the White House. It’s painted so big the writing can be seen from space.

Subtweeting President Donald Trump’s teargassing of peaceful protesters for a photo-op, Chief of staff for Bowser, John Falcicchio, took to Twitter to share the mayor’s inspiration for this mural:

There was a dispute this week about whose street this is. Mayor Bowser wanted to make it abundantly clear that this is DC’s street and to honor demonstrators who peacefully protesting on Monday evening. https://t.co/bjdVXLUf12

Bowser also renamed this section of the street as Black Lives Matter Plaza, finalizing the commemoration with a street sign.

The section of 16th street in front of the White House is now officially “Black Lives Matter Plaza”. pic.twitter.com/bbJgAYE35b

Seemingly fearful of the people he’s meant to serve, Trump had a wall built around the White House, roping in some spaces that are traditionally open to the public. Nearly 1.7 miles of mesh metal fences have been erected, and it is protected by police. Demonstrators have responded with art, using the wall as a gallery for protest signs, paintings, and memorials to George Floyd, Breonna Taylor, and the many other Black people who have died because of police brutality and white supremacy. (DCist)

The fence outside the White House has been converted to a crowd-sourced memorial wall — almost like an art gallery — to black men and women who lost their lives at the hands of police.

The 8-foot chain link fence protecting the White House has become a sort of archive / exhibition of the D.C. protests with signs, memorials, flowers and art. pic.twitter.com/mvr0wBkOy6

The temporary fence around the White House & Lafayette Square has turned into a memorial as well as a place for people to leave their protest signs. #DCProtests pic.twitter.com/kKce4yFwzI 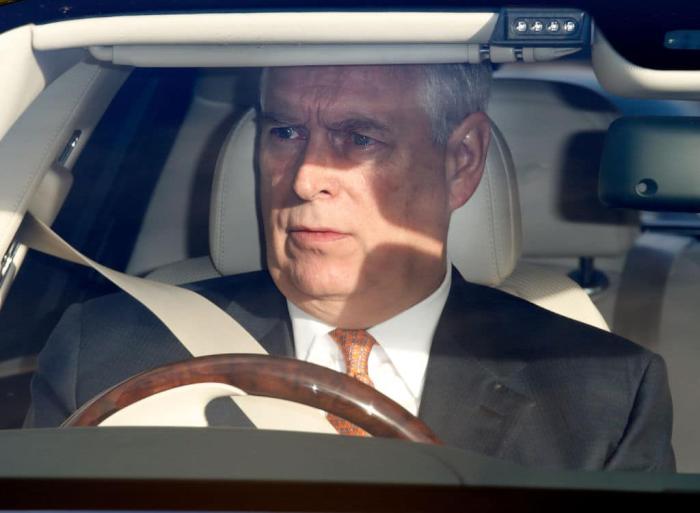