Yesterday, the United States saw only 373 deaths from the Coronavirus, which is the least amount of deaths from the virus since March 26th. That is undoubtedly great news, as the number of deaths around the country continues to drop.

That said, the number of new infections has not dropped precipitously, although they have flattened to the 20,000 to 23,000 daily new infections. 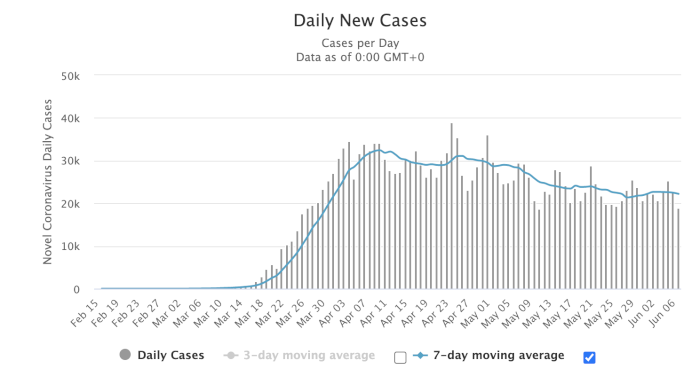 Why are we seeing the same number of cases, but fewer deaths? Some are arguing that the virus is weaker, but that’s a heavily disputed and dangerous argument. The much more likely reasons are that, as far more testing is available, the number of infections better reflects the reality of the situation (as opposed to the tens of thousands of infections that went undetected earlier in the outbreak); the number of cases are spread out across the United States instead of being concentrated in a small number of hotspots, allowing hospitals to devote more time to individual patients; hospitals have gotten better overall at treating patients; older and more compromised individuals are staying home more; we’re getting the problem in nursing homes and long-term health centers under control; and social distancing may be reducing the viral load, lessening the impact of the virus. Meanwhile, the shutdowns themselves reportedly prevented 60 million infections in the United States.

However, the economy is slowly opening back up. The epicenter of the Coronavirus in America, New York City, is starting to open up today; Massachusetts is moving into its second phase; and California continues to reopen, even as the infection rate rises in Los Angeles. People are returning to Las Vegas casinos, and many are not wearing masks. Meanwhile, nightclubs are opening in Florida. NIGHTCLUBS!

We’ll see how that goes. In the meantime, the economy is probably not going to recover quickly, because there are still too many child-care challenges to count, with many/most schools and camps closed for the summer and concerns about a second-wave putting fall reopenings in danger. Meanwhile, the unemployment numbers that Trump was touting on Friday may not have been accurate, although that hasn’t stopped Larry Kudlow from doing his little dance:

WH economic adviser Kevin Hassett said on CNBC today “massive fluctuations” should be expected in the US economy after a misclassification error in the May jobs report that may place the real unemployment rate higher than the one touted by the President last week.

America is coming back! pic.twitter.com/Er1O33va2N

We do remain hopeful — though cautious — that we will not see any big rises in cases and that deaths continue to decline. Meanwhile, experts — including Dr. Fauci — are increasingly confident that we will get a vaccine, probably in early 2021. There are some worries, however, that Trump will rush out a potentially unsafe vaccine as part of an October surprise in order to save his reelection chances. Not only would that be unsafe, it would demolish trust in vaccines and give anti-vaxxers all the political ammunition they need for years.

But it’s 2020, so count on it. Mark it on your calendars for sometime around October 23rd.


← More Statues Commemorating Racists Are Coming Down, Thanks To Black Lives Matter Movement | J.K. Rowling Has Made Herself Completely Irrelevant and She Only Has Herself to Blame →