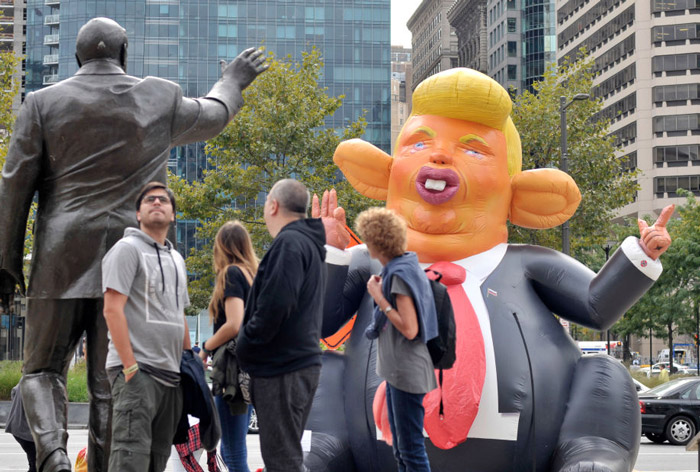 Black Lives Matter protests across the nation are demanding America challenge systems, which have long been threaded with white supremacy. In this environment, some symbols of that institutional racism are finally coming down.

Here is a round-up of the recent takedowns of statues that commemorate racists.

Protesters tearing down a Confederate statue of Charles Linn in Birmingham, Alabama. Linn was a captain in the Confederate Navy. pic.twitter.com/KBZELq61A4

When Birmingham protesters began to vandalize the five-story tall obelisk known as The Confederate Soldiers and Sailors Monument, Mayor Randall Woodfin begged their patience, “Allow me to finish the job for you.” He delivered on this promise on Monday night, when a team began safely demolishing the structure. (NPR)

In Alexandria, Virginia, a memorial to Confederate soldiers has stood since 1889 with its back to the North. Following seven straight nights of Black Lives Matter protests, the statue was taken down yesterday by order of The United Daughters of the Confederacy, who own it. (CNN)

Alexandria, like all great cities, is constantly changing and evolving. pic.twitter.com/CZTjlOkpfT

In Nashville, Tennesee, protestors tore down a statue of Edward Carmack on Saturday. He was a newspaper publisher and politician who used his platform to denounce Black journalist Ida B. Wells, who is known as the “Mother of the Civil Rights Movement,” for her fight to end lynching. His call for retaliation against the “black wench,” led to her Memphis office being set on fire. The city towed the one-ton bronze statue away on Monday; unknown is if it will be re-installed. (WKRN)

The statue of Edward Carmack, an early 1900s newspaper publisher who hated Ida B. Wells and alcohol and was gunned down on a Nashville street, has been torn down.

There has been a commission in the works for years to replace this with one of Davy Crockett. pic.twitter.com/7xOE5Yhy3n

In Fort Myers, Florida, a bust of Confederate general Robert E. Lee was removed from public display at the request of the Sons of Confederate Veterans, who erected it in 1966. (Orlando Sentinel)

However, the bust was removed for “safekeeping,” as the Sons of Confederate Veterans said the Black Lives Matter protests are “not their fight.” As such, the NAACP has issued a statement through their Lee County president, James Muwakkil, who said, “Robert E. Lee isn’t separate from what we’re seeing throughout the country and what has happened here. [The bust] should never come back.” (Wink News)

In Philadelphia, Pennsylvania, a statue of the former police commissioner and mayor Frank Rizzo was vandalized on May 30. Rizzo was a conservative icon, who campaigned with the tagline “Vote White,” and once said of protesters who opposed police brutality, “When I’m finished with them, I’ll make Attila the Hun look like a f*ggot.” There were plans in place to remove the statue in the renovation of Thomas Paine Plaza in 2021. However, Mayor Jim Kenney had it removed early this morning.

The statue represented bigotry, hatred, and oppression for too many people, for too long. It is finally gone. pic.twitter.com/30f2Skpqog

In a statement, he said:

“The statue is a deplorable monument to racism, bigotry, and police brutality for members of the Black community, the LGBTQ community, and many others. The treatment of these communities under Mr. Rizzo’s leadership was among the worst periods in Philadelphia’s history. The battle for equal rights and justice is still being fought decades later, and our city is still working to erase that legacy. We now need to work for true equity for all Philadelphia residents, and toward healing our communities. The removal of this statue today is but a small step in that process.”

Did we miss the dismantling of a statue celebrating a racist? Please share below in comments.

← Lea Michele Offers Insincere Non-Apology After Being Called Out By Former 'Glee' Co-Stars for Bullying | This Week on Podjiba: 'Love Life', 'Space Force', and Police Portrayal in TV →