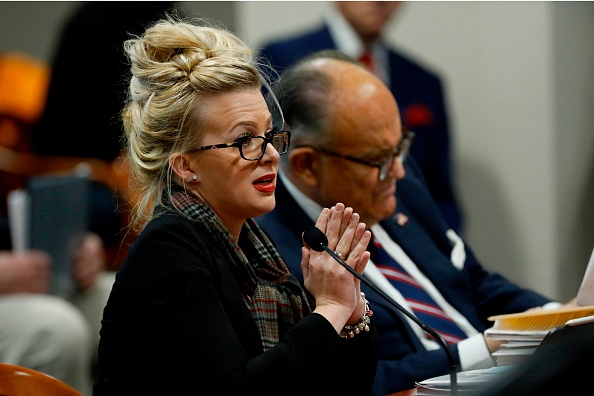 Yesterday, Rudy Giuliani appeared in a Michigan hearing before the state’s House Oversight Committee to address claims of voter fraud during the 2020 presidential election. Rudy brought along with him a number of witnesses, each of whom seemed to be more deluded than the last. The hearing was at times heated, and Giuliani frequently interjected with objections, as though he were in a court of law (he was not).

And then came Melissa Carone. Carone — a contractor for Dominion Voting Systems — has been giving interviews with conservative outlets for weeks, claiming among other things that ballots were being smuggled inside of food vans. Even some of the most loyal Trump commenters have been baffled by her claims, and she’d been deemed “not credible” by a Michigan judge a few days ago.

And yet, there she was yesterday, giving unhinged testimony to Michigan’s House Oversight Committee, drawing a number of comparisons on social media to SNL characters played by the likes of Cecily Strong, Kate McKinnon and Victoria Jackson (the answer is: She’s most like a Cecily Strong SNL character but also real-life Victoria Jackson). Listen to this lady — she is exactly the Girl You Wish You Hadn’t Started a Conversation With at a Party.

For those who don’t want to wait until this weekend’s SNL, there are already imitators popping up online (I think Cecily Strong is still out, anyway).

holy shit there’s more footage of the lady in the trump trials pic.twitter.com/OeMEUE64WV

What’s perhaps scarier than the mockery is the number of Trump Republicans who … believe her.

Melissa Carone testifies before Michigan State Senate Committee about 2020 election: "What I witnessed at the Centre was complete fraud. Batches of the same ballots counted multiple times, 8 - 10 times. THE WHOLE 27 HOURS NOT ONE SINGLE BALLOT FOR DONALD TRUMP!!! That is scary". pic.twitter.com/5QKGbXnSQb

I dont give a f**k if Melissa Carone is drunk or fucking sober I LOVE her for speaking truth and going ape shit on Rep Steve Johnson in this hearing https://t.co/lBGC3OPizR

Melissa Carone the IT contractor for Dominion Software has completely changed the game for not only Michigan election fraud but for Dominion as well. She has testified that she was personally trained by Nick Ikonomakis VP of Dominion development on how to properly cheat.

The mockery, however, is is delicious, too.

Melissa carone is America in a nut shell. Dumb as fuck, arrogant, entitled, and an embarrassment. #melissacarone 🤣🤣🤣

I thought Rudy Giuliani was crazy.

Then I thought that Trump's 46-minute tirade was insane.

But the #Trump Star witness Melissa Carone in #Michigan is on another level.#SNL and Kate McKinnon will have some serious fun with this!pic.twitter.com/wrgchmHBz6

Please, Charlie Brooker: Don’t leave this woman out of your mockumentary of 2020.