The Enemy of Your Enemy Is Not Your Friend

Former Congressman and conservative talk radio host Joe Walsh announced that he is entering the Republican primary to take on Donald Trump. I don’t know how popular Joe Walsh is in the world, but he’s a fixture on Twitter, where he’s frequently tweeted into my timeline because he’s the rare conservative who speaks out against Trump.

Recently, Walsh apologized for helping elect an “unfit” man into office, even though he was one of his biggest supporters before the 2016 election.

On November 9th, if Trump loses, I'm grabbing my musket.

Yeah, this is that guy. (Also he’s the deadbeat Dad whose failure to pay child support cost him reelection in 2012). Granted, in recent months, Walsh has pivoted into one of Trump’s harshest critics on the right, which again feels more opportunistic than genuine, particularly given Walsh’s own history. To wit:

The single greatest act of racism in American history was the election of Barack Obama.

People voted for him simply because he was black.

.@angela_rye And your way wrong on your main point Angela. We LOWERED the bar for Obama. He was held to a lower standard cuz he was black. https://t.co/OMXphLZUTj

Obama is a Muslim

In other words, everything that Joe Walsh says here can be accurate …

… but it doesn’t make Joe Walsh someone for whom to root, except maybe — as George Conway (another anti-Trump conservative) suggests — as a means to hasten Trump’s breakdown. 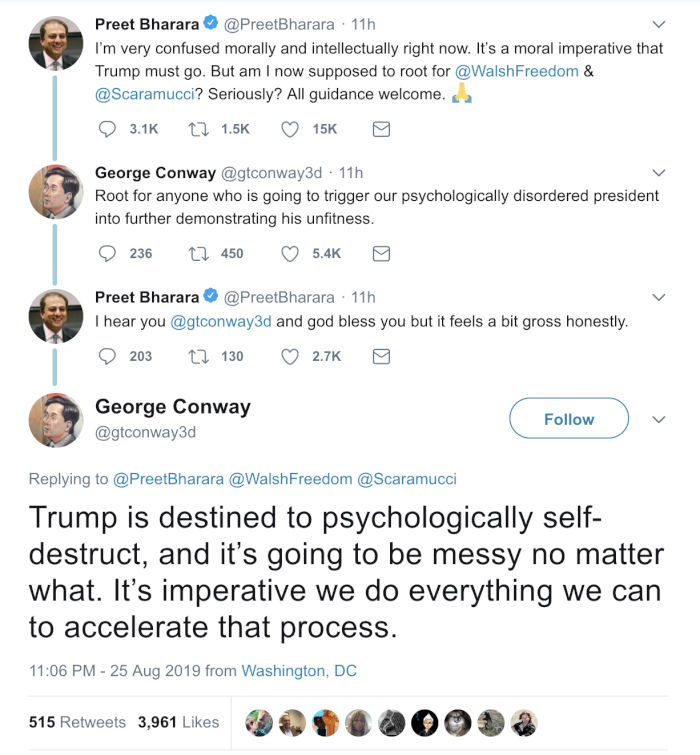 Even there, I don’t think Walsh is the right guy, not when there is someone else much more capable of getting under Trump’s thin skin and into his head.

We have enough racists running for President in 2020. We don’t need another just because he opposes Trump.