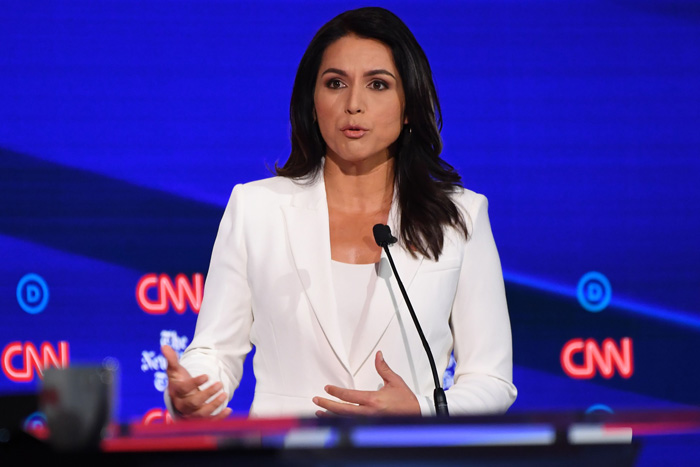 Hillary Clinton Says It out Loud: Tulsi Gabbard Is the Jill Stein of 2020

During the 2016 presidential race, Hillary Clinton repeatedly tried to warn the American public that Donald Trump is a Russian asset, which has become more crystal clear than ever in the past few weeks. She blatantly accused Trump of being Putin’s puppet during the debates, and what was President Very Large Brain’s brilliant rebuttal? “You’re the puppet!” That was his big argument. “Nuh uh, you are.”

Instead of heeding Clinton’s warning, Republicans voted en masse for a candidate who promised them a goddamn smorgasbord of racism, which was inevitable. There was no stopping that. On the Democrat side is where things went pear-shaped. Despite Hillary winning the popular vote by a sizable number, Trump very narrowly triggered electoral college wins in key states by the skin of his teeth, thanks to third party votes. Granted, a significant amount of those numbers were for Gary Johnson, it demonstrated the importance that every vote counts. You can’t sit on your couch because your favorite didn’t win or pull the trigger for a protest vote either because you think both candidates are the same (which… goddammit) or because your state is “safe.”

The choice is Donald Trump or the only party that can beat Donald Trump. That’s the lesson from 2016. But sure enough, Russia is betting — and sadly correctly — that a third party spoiler could pull the same rabbit out of the hat, and once again, Hillary Clinton is sounding the alarm. Maybe this time, we don’t be assholes and actually listen? Just throwing that out there.

Without rehashing the multitude of ways that Tulsi Gabbard is a terrible candidate, including the fact that Meghan McCain LOVES her — which is a significant red flag right there because Meghan does not want a Democrat to win, no matter how much she tries to act like an “independent” — Gabbard does have a bedrock of support from the Extremely Online Left like Matt Taibbi, Glenn Greenwald, Aaron Mate, that whole clown circus. It all goes back to the 2016 election when Gabbard backed Bernie Sanders, and the loyalty from his voters is where the opportunity for all kinds of f*ckery can and almost definitely will happen.

To be clear, I absolutely believe that the majority of Bernie voters will gravitate to Elizabeth Warren once he’s out of the race. (He’s been losing ground to her for months.) However, if there’s one move that Bernie excels at, it’s dragging out his inevitable loss until his diehard supporters start screaming about rigged primaries, dig in their heels, and refuse to vote for an “establishment” candidate. That’s an opening Tulsi can drive a truck full of chemical weapons through.

Fortunately, there’s not an event coming this weekend that will only galvanize Bernie’s base against the Democratic Party and juice them right up for a third-party protest bang.

The billionaires thought their heart-attack ray could stop him.

With @AOC, @RashidaTlaib, and @Ilhan on his side, he is now UNSTOPPABLE pic.twitter.com/cAD5SeypOt

P.S. That tweet is from a pro-Bernie publication that apparently thinks it’s awesome that he’s standing at a podium, with goddamn laser eyes violently melting anyone who dares oppose him. No disturbing horseshoe politics there!

← Next on 'A Million Little Things' Recap: Is Having Sex with the Recipient of Your Brother's Heart Incest? | What Happened to Walton Goggins's Uncle Baby Billy on 'The Righteous Gemstones' Finale? →