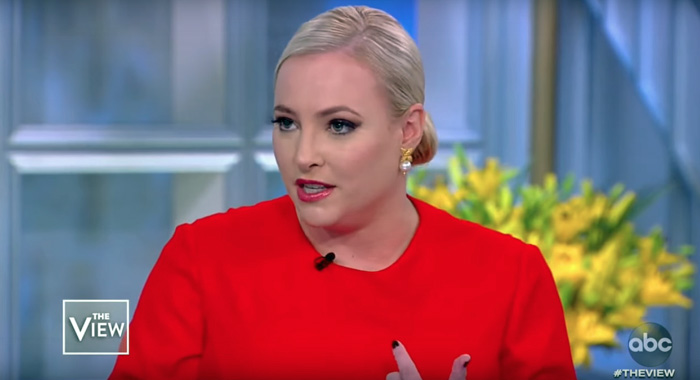 Between all of the MY FATHER gags and gargoyle jokes, I’m not sure if I ever explained the exact game that Meghan McCain is playing on The View. So let’s do that now, and it will put her “expert analysis” on last night’s Democratic debates into crystal clear perspective.

When the Ukraine situation exploded last month and impeachment went from a whisper to a deafening roar, you’d think Donald Trump’s most fierce critic (self-proclaimed) would relish the fact that his corruption was finally being dragged into the light. NOPE. She hopped on every grenade for the president and even tried to go toe-to-toe with goddamn Rachel Maddow because failed bombing runs are a family tradition. However, Meghan’s most telling moment came when she was dutifully flanking Adam Schiff from the right in an attempt to discredit the House investigation into Trump.

“Adam Schiff is the man,” Hostin said. “He is fantastic.”

The audience cheered her praise, and McCain jumped in for the last word.

“With all due respect, again,” McCain said, “he doesn’t need you, he needs me. For the final time, these guys don’t need anybody at this table except me to believe them.”

And there it is. Welcome to Meghan’s game, a Thunderdome of bullshit where Democrats are expected to compete for her favor as if the staunch conservative white lady vote is even up for grabs. (It’s not.) She’s Lucy with the football, only you can see her coming from a mile away because I’m about to show you a perfect example of why Meghan’s allegiance is and will always be with the Republican Party.

Out of the 800 Democratic candidates, no one has Meghan’s adoration and support more than Joe Biden. — Tulsi is a close second, but basically being a Republican will do that. — Meghan speaks glowingly of Biden all of the time, and as much as Trump continues to shit on her dad’s name, you’d think she’d do everything in her power to help a dear family friend and extremely moderate politician take the general election.

For those of you who didn’t watch, that was a clip of Meghan emotionally saying Biden would be “healing for the country” while refusing to say that she will vote for him, which is classic Meghan. Whole lot of talk, no intention of bucking the party line. Just like dad! But that is Meghan’s game in a nutshell, and once you see it, it makes everything she says completely transparent.

To put an even sharper point on the Biden example, yesterday, Meghan pulled an incredible snake in the grass move by speaking lovingly of the Biden family and bolstering the Republican talking points on Hunter Biden in the same breath. Yeah…

With all of that in mind, it doesn’t take a genius to see what Meghan is doing with her debate coverage. Elizabeth Warren is starting to move ahead of Biden as the Democratic frontrunner, which makes her a bigger threat to Trump and a target. So what’s Meghan’s move? Prop up the lower-tier and niche candidates to stir up dissension in the ranks.

Klobuchar, Mayor Pete and Yang winning the evening by a lot. All appearing to see there’s a huge lane of voters outside the far left progressive squad. Warren is much more vulnerable than I have given her credit for. Biggest loser however is Tom Steyer’s Christmas tie. #DemDebate

This conversation about automation is all because of @AndrewYang - for a guy with absolutely no political background it's incredibly impressive. #DemDebates

This is a really wonderful and inspiring closing answer about the divisions in our country and treating all Americans with respect from @TulsiGabbard. #DemDebate4

Meghan McCain won’t even vote for Joe Biden, who gave her the most memorable MY FATHER moment of her entire View career. Do you honestly think she’s going to become one of the Yang Gang or pull the lever for Amy Klobuchar? C’mon. But what Meghan will do is gleefully cheer them on as they chip away at Warren. This is not about highlighting candidates who can convert imaginary Republicans that will suddenly vote blue if everyone stops talking about socialism. This is about protecting the party, and the party is Trump. Period.

Now that you know the key to Meghan’s Miracle Whip Rosetta Stone, here’s The View discussion on last night’s debate, where John McCain’s wunderkind reads her own tweets, because she doesn’t get enough time to talk, and follows up that petulant whining by being a massive bitch to Sunny Hostin. It was jarring even to me, and I’ve watched so many hours of this show that my brain bleeds when I think. However, Chelsea Clinton was on the panel, and she ended the discussion by intelligently highlighting the stark contrast between Democratic and Republican debates, so now would be a good time to buy stock in Jell-O shots and bullets because Meghan’s going to need a whole lot of both today.

← A Brief Investigation Into Why Jared Leto's Joker Was So Terrible | Review: 'Zombieland: Double Tap' With Jesse Eisenberg, Emma Stone, And Zoey Deutch →