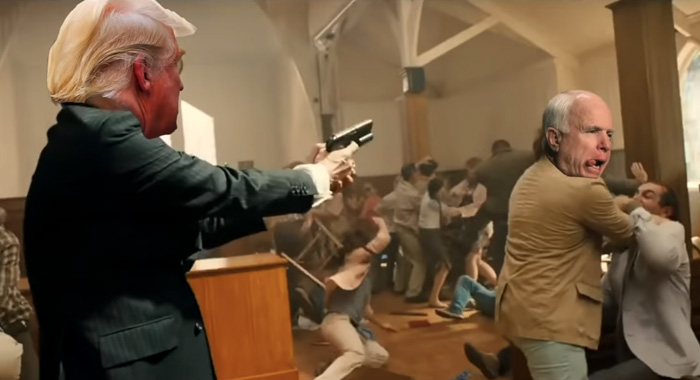 Yeah, I can see why she might be pissed about that.

As impeachment looms and a deranged Donald Trump threatens everything from suing his political opponents, jailing them for treason, or just all-out inciting a Civil War, you’d think it’d behoove the Republican Party to pump the brakes on violent rhetoric. Of course, that would require them to have souls, so naturally, they went the opposite direction. During a pro-Trump conference at the president’s Doral resort in Miami last week, attendees such as Donald Trump Jr., Sarah Huckabee Sanders, and Florida governor Ron DeSantis were treated to a YouTube video of Trump’s face superimposed over Colin Firth’s character in Kingsman as he violently shoots up a church. Only this time, the victims’ faces are changed to John McCain (above), Mitt Romney, Adam Schiff, Maxine Walters, and various logos for CNN, NPR, and — wow, goddammit — Black Lives Matter.

This is our world now. 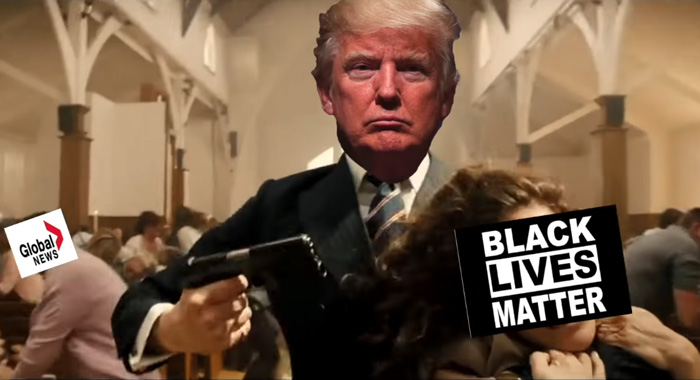 If you’re absolutely curious about seeing the Kingsman video, I won’t link to the original but instead, point you in the direction of Yashar Ali, so at least the pro-Trump pecker-necks who made it won’t get the views. Oddly, the video is over a year old, but clearly someone in TrumpLand loved it enough to keep that baby bookmarked for just the right moment.

In the meantime, Meghan McCain is justifiably furious that a video showing her father being shot and murdered was played for laughs at a pro-Trump event. Via Raw Story:

“I am not someone who thinks we can’t have content and entertainment and writing and that talking about violence is important, but this is an entirely different thing when you use pictures of actual people who are still alive,” McCain said. “How easy for all of you judging me that I’m offended and upset by the video. You try doing this when a member of your family has continued to have this happen over and over and over again, and it doesn’t seem to matter to anybody in Trump world whatsoever.”

“You conservatives on Twitter, if this were the opposite,” she added, “it happened at an Obama event, you’d be screaming bloody murder. So stop.”

In Meghan’s defense, she has been openly battling with conservative cocknozzle Stephen Miller — not the president’s in-house Nazi, a different Stephen Miller because apparently that name is cursed — and even more amazingly, Meghan makes a salient point that the Trump video is an entirely different situation than Joker. While there’s understandable concern about a movie inciting copycat violence and a reasonable debate to be had about not censoring art because of that fear, there is an undeniable canyon between a film like Joker and a propaganda video that celebrates the president literally murdering his political opponents. Especially when that video is geared directly towards a constituency who is goddamn itching to use the firearms they hump themselves to sleep with every night.

That said… while we’re on the topic of violent rhetoric, which Meghan is very much against now, our favorite Harvey Milk award recipient has yet to condemn this angry little leprechaun:

Ben Shapiro warns that if politicians try to mandate LGBTQ 'indoctrination' at all schools, then he will "pick up a gun." Further adding "Beto O'Rourke does not get to raise my child. And if he tries, I will meet him at the door with a gun" pic.twitter.com/Hq7SyF7FeI

I don’t know about you, but threatening to shoot an entire school if they teach your kids about the gays sounds like some dangerous rhetoric that could absolutely incite real-world violence, which Ben Shapiro has a solid track record of doing. The tiny guy has some stats. Yet, for some reason, Meghan is quiet as a church mouse. I wonder why?

I really enjoy speaking with ⁦@benshapiro⁩ for this weeks “The Ben Shapiro Show Sunday Special”. He asked me questions no one ever seems to care to ask and truly listened. I am grateful for this conversation and for the work he does during this time of censorship. 🇺🇸🇺🇸 pic.twitter.com/wGlPRXTwQe

On that note, here’s the entire panel discussion where you can watch Meghan have every reason to be pissed about the Trump video, yet she still manages to tank her shockingly correct points just by being Meghan. She can’t help herself. She’s literally two feet from the end zone, but instead of running it in, she punts the ball into the stands then punches Abby Huntsman in the face. Did they not have football growing up on the beer plantation? Take the win!