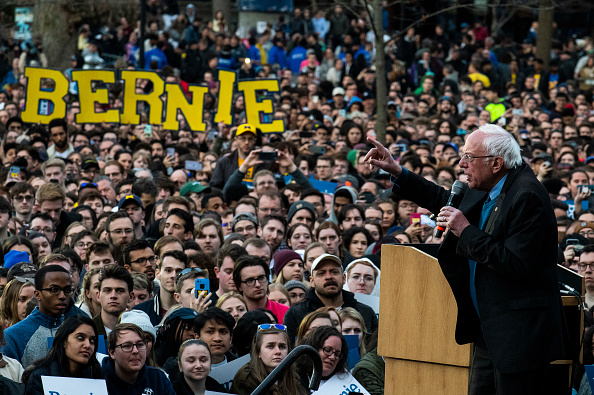 It All Comes Down to Michigan

Like South Carolina was for Joe Biden, Michigan is make-or-break for Bernie Sanders tonight. One of the three most important states for Democrats — along with Wisconsin and Pennsylvania — Michigan is not just a key battleground state with a lot delegates at stake, it’s the kind of state that Bernie needs to win to prove that he can defeat Donald Trump. If he can’t hang on to this firewall in 2020, the race may be effectively over.

The bad news for Bernie is this: The polls are not in his favor. The polls have him down 23 points to Joe Biden. On the flip side, those same polls had Hillary Clinton leading Sanders by 21 points in 2016. Bernie won the state, by 23,000 votes. This could be another of those instances where Bernie pulls off a dramatic upset. Or it could just prove again how much people hate Hillary Clinton.

I don’t how the results will shake out tonight, but the race between these two old guys has weirdly morphed into one that in some ways pits race vs. class. Joe Biden won Super Tuesday last week thanks to Black voters. Bernie Sanders’ relies heavily on white working-class voters, especially in the Rustbelt (notwithstanding Jesse Jackson’s endorsement of Bernie Sanders). Biden leads among Black voters. Bernie leads among voters who make less than $50,000 a year. Michigan has a lot of voters that fit into both demographics, so it’ll be interesting to see how that shakes out. My guess is that Bernie will broaden his coalition among people of color in Michigan, but he will lose some white working-class voters who voted against Clinton in 2016 instead of for Bernie.

I will say this: The Bernie rallies have been massive.

He only held two events. pic.twitter.com/XuddBb8OVe

Then again, the Warren rallies were massive, too, for a while. And Trump rallies were bigger than Hillary’s in 2016, and she won the popular vote. So, who knows? But Bernie has been going hard in Michigan the last four days, as though he knows it could be his final stand. He even went on Fox News for a town hall last night. Like Warren, I don’t think that Dem candidates should be supporting Fox News. On the other hand, Bernie was very good on it:

Bernie Sanders on Fox News Town Hall: “I live 50 miles away from the Canadian border. This is not a communist society, up there, in Montreal.” [Audience laughs] pic.twitter.com/s27GDAAicT

Mississippi, Missouri, Idaho, North Dakota, and Washington will also be voting tonight. Washington is a mail-in primary, so no one knows what to expect (Sanders beat Hillary in 2016, but it was a caucus, where Sanders performs much better. Likewise, Idaho was a caucus in 2016 that went for Sanders but is moving to a primary this year). It could be close in Missouri, and Biden is expected to win in a blow out in Mississippi.