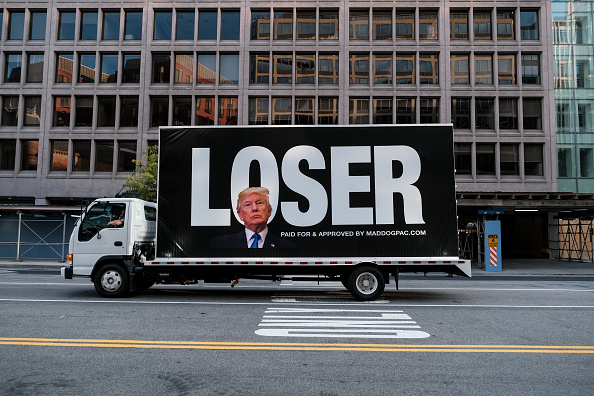 Donald 'One-Term Loser' Trump Is Not Very Good at Presidenting

Good morning. I hope you all had a great holiday. In fact, I hope you all continue to have a great holiday, because today’s not a real workday, even for people who have to work today. I used to love working during the week between Christmas and New Year’s because nobody else was in the office, I could knock off early, and no one expected much from me. I have carried that tradition on to Pajiba, which is to say: I’m working today, but am I?

Trump signed the COVID-stimulus bill (and the budget) yesterday. After holding it up for several days, making a lot of people very anxious, and delaying unemployment checks for millions of people, Trump signed the agreement in exchange for … nothing. Not one thing.

Playbook: Trump got nothing. THAT’S IT? President [Trump] made all this noise about the Covid relief and government funding bill only to sign it and get nothing in return? TRUMP got taken to the cleaners. WHAT A BIZARRE, embarrassing episode for the president. He opposed a bill his administration negotiated. He had no discernible strategy and no hand to play — and it showed. He folded, and got nothing besides a few days of attention and chaos. ZIP. ZERO. ZILCH. If he was going to give up this easy, he should’ve just kept quiet and signed the bill. It would’ve been less embarrassing.

THIS IS PROBABLY THE MOST FITTING coda to TRUMP’S presidency, and a neat encapsulation of his relationship with Congress. He never cared to understand the place and was disengaged from its work. THEY’LL BE LAUGHING — er, scratching their heads — at your genius about this one for a while, Mr. President.

And that ends yet another embarrassing episode of the Trump presidency. Next up? January 6th! Trump still believes that he’s going to be able to convince Mike Pence and Congressional Republicans to ignore the Electoral College — the very thing that gave him the 2016 election — and overturn the 2020 results. That’s not going to happen, either. Mike Pence couldn’t even do it if he wanted to. From Law and Crime:

Legal experts say Pence has absolutely no authority, constitutional or otherwise, to prevent ratification of the electoral college votes. The Constitution states that Pence “shall, in the presence of the Senate and House of Representatives, open all the certificates and the votes shall then be counted.” The “shall” in the provision is an imperative command, unambiguously requiring the act be completed, making Pence’s role merely ceremonial.

“The 12th Amendment merely designates the President of the Senate (the VP) to ‘open all the certificates.’ But then uses the passive voice: ‘the votes shall then be counted.’ Implicitly, Congress does the counting,” Fordham law professor and legal historian Jed Shugerman clarified on Twitter.

Joe Biden will be President in 23 days. Give it up, Trump. Slink away. Even Rupert Murdoch’s NYPost — Trump’s favorite newspaper, and one of the few that endorsed him against Biden — is telling Trump to call it quits. “You had every right to investigate the election. But let’s be clear: Those efforts have found nothing,” the Post editorial board wrote. “Michael Flynn suggesting martial law is tantamount to treason. It is shameful … Democrats will try to write you off as a one-term aberration and, frankly, you’re helping them do it. The King Lear of Mar-a-Lago, ranting about the corruption of the world.”

The Post says: Give it up, Mr. President — for your sake and the nation’s https://t.co/uTh5Vm1dlR pic.twitter.com/HLTCl5ulzy

Finally, don’t forget to vote in the Pajiba 10. Only you can keep Casey Affleck out of the Pajiba 10 (that’s not true. He doesn’t have a single vote. I’ve just been very heartened by the number of people who have voted for Dolly Parton, and I’d like to see more! Am I unduly influencing the vote? I think it’s OK, because I am standing 100 feet from the polling station — clear over here in a politics post! I swear!)