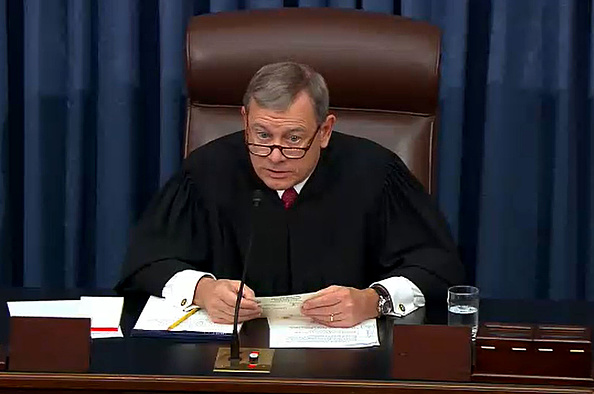 You had to know when Susan Collins decided that she would vote for witnesses (and therefore John Bolton) in the impeachment trial that it would not matter. Susan Collins does not take principled stands. She takes symbolic stands, so the cards must have already fallen. Senator Lamar Alexander — who is retiring at year’s end — is not going to vote for witnesses, and the reason why is the same reason why defendants stipulate to a set of facts rather than allow the prosecution to prove them: Because admitting to the expected testimony of the witness is less damaging than allowing the witness to spell it out in all its grisly detail.

Here, Lamar Alexander is saying, “Yes. Donald Trump did what the Democrats accused him of doing. Yes, Donald Trump withheld $400 million in foreign aid in exchange for Ukraine’s agreement to investigate Burisma, Hunter Biden, Joe Biden, and a server that exists only in the minds of the President, Rudy Giuliani, and 4Chan members. But so what? It’s not an impeachable offense.”

And he’s right. If the Republicans aren’t willing to impeach Donald Trump over foreign interference, then it’s not technically an impeachable offense, is it? My wife loves to find a good deal, and she’ll brag that she bought something for $50 that was originally priced at $250, and I will say, ‘Just because it was originally priced at $250 doesn’t mean it is worth $250. It is only worth as much as someone is willing to pay, and here, it’s worth $50 because that’s how much you were willing to pay,” and then she will tell me to go f**k myself. It’s the same thing here: It’s only an impeachable offense if the people who get to ultimately make the decision decide it’s an impeachable offense. The Republican Senate does not believe a handbag that retails for $10,000 is worth $50, and so it’s not an impeachable offense — or at least, they’re not willing to admit it falls under the category of “high crimes and misdemeanors,” although you bet your ass they would if it were a Democratic President.

And here’s the thing: If the American people don’t want the President of the United States to get away with what is objectively a high crime and misdemeanor, we have to vote for different people to make the determination about what constitutes an impeachable offense.

We live in a representational Democracy. Our Democracy is incredibly unfair to marginalized groups. Gerrymandering and voter suppression have stacked it against the Democratic party. But it’s not “completely broken” … yet. So far as we know, our votes still matter. They mattered in 2018 — they are the reason why we were able to impeach the President in the first place. We were a vote short in the Senate to vote for witnesses. Texas voted for Ted Cruz instead of Beto O’Rourke, and now we are suffering the consequences of Ted Cruz. Lamar Alexander, instead, is the decisive vote in whether to allow witnesses: Tennessee voted him in office by what I imagine was a sizable margin in 2014. Tennessee gets a chance to vote for someone different in November.

One of my best friends growing up had a Dad named Wayne. I loved that man. I called him “Sweet Father,” and he was like a second dad to me. He and his late wife, “Sweet Mother,” helped to raise me. They gave me food. They told me how to apply to college. They gave me a place to escape to when there were too many drug users in my home. Sweet Father used to say to me all the time, “It’s a poor man who blames his tools.” He would say that in jest — if I was blaming a broken video game controller because I was losing a game — or with complete sincerity, when the system was institutionally stacked against people in my circumstances. Basically, he was saying to me, “Shut the f**k up, stop whining, and figure it out.” It would drive me crazy, but he was right. It doesn’t do us any good to whine about a severely flawed system. Those are the tools with which we have to work. It’s up to us to figure it out. My advice? Get your head on straight and remind yourself who the real goddamn enemy is.

We need to go out there and step on some necks.


← Linda Hamilton Would Like to Be Done with 'Terminator' Now, Thanks | All the Hidden Jokes In 'The Good Place' Finale, 'Whenever You're Ready' →