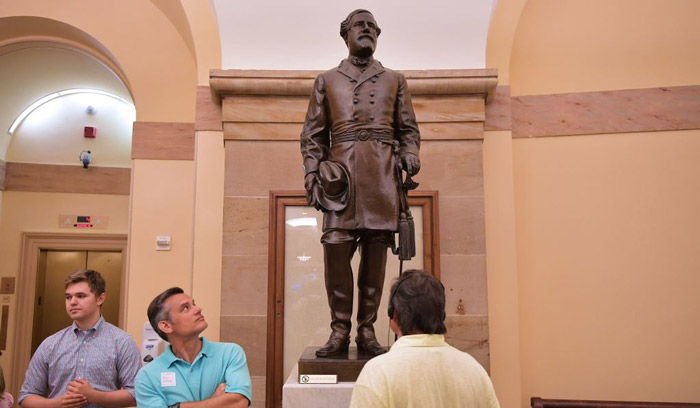 2020 brought a fresh level of reckoning with America’s past, spurring protesters across the nation to call for the taking down of statues that glorified Conferedates, slavers, racists, and genocidal colonizers. When they couldn’t get them taken down through official channels, they tore them down with their bare hands. Joining the ranks of the many removed memorials is a statue of Confederate general Robert E. Lee, which was pulled from the Capitol building on Monday.

CNN reports the statue stood for 111 years as part of Virginia’s contribution to the National Statuary Hall, wherein each state gets to choose two sculptures. Virginia Governor Ralph Northam, who is working to remove Lee Statues in Virginia as well, announced the Capitol’s Lee memorial will be replaced by one honoring civil rights icon Barbara Johns.

Virginia native, Johns is credited with helping launch the Civil Rights movement when she was just 16. That was when this young Black woman led a school walkout to protest for equal education, meaning schools should get the same assets regardless of the color of their student body’s skin. Her case was folded into the Brown v. Board of Education of Topeka lawsuit, which led to the Supreme Court declaring segregation unconstitutional in 1954.

You can learn more about her at CNN.

In a statement about the statue swap, Northam said:

We should all be proud of this important step forward for our Commonwealth and our country. The Confederacy is a symbol of Virginia’s racist and divisive history, and it is past time we tell our story with images of perseverance, diversity, and inclusion. I look forward to seeing a trailblazing young woman of color represent Virginia in the U.S. Capitol, where visitors will learn about Barbara Johns’ contributions to America and be empowered to create positive change in their communities just like she did.

Democratic Virginia senator Tim Kaine was present for the removal, and posted this video of the Lee statue being taken down:

Robert E. Lee was a racist like you and a slave owner. You're right, we're not just tearing him down in Virginia. We are replacing him with one of five Virginians who're people of color. https://t.co/S5bqehMyWx

I see [these statues] as idolatries… They have been created into idols of white supremacy and racism. [Taking them down] is a no brainer. This is an issue of justice and of peace. [If] we want peace in our time and the ability to [have] equality … we must do that by addressing the monuments not only in stone and in bronze, but elsewhere as well.

Last July, the House voted to remove statues of Confederates from the Capitol. The Senate has not yet addressed the proposed bill.