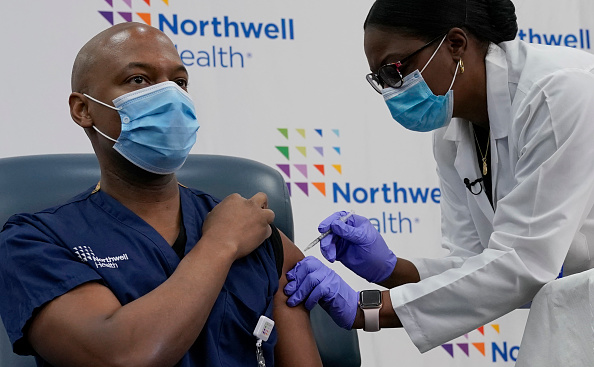 As the First Vaccine Is Administered in the U.S., Hope Is Tempered by Confusion

Today is one of mixed blessings, as the first vaccinations have already been injected (the first recipient is thought to be a critical care nurse in New York City), but at the same time, we will surpass 300,000 official deaths from COVID-19 (the actual number of deaths attributed to the virus is thought to be much higher). I thought we might plateau at around 200,000 cases a day; on Friday, we hit 280,000. The United States wants to vaccinate 100 million people by the end of February. At the rate we’re going, there will be another 18 million infections by then to go on top of the existing 16 million.

So, we need that vaccine ASAP. The rollout, alas, is not going smoothly, as one would expect with anything under the Trump Administration. Yesterday afternoon it was announced that the staff in the White House — home of several superspreader events — would be getting the vaccine first. However, Trump decided against that — via Twitter — after a huge backlash. He basically said, OK, well, uh, nevermind then, the White House will get their vaccinations a little later.

Do they really need vaccinations? Haven’t they all had the virus already?

Meanwhile, the first vaccinations are meant to go to high-risk healthcare workers and elderly residents at long-term care facilities, but for reasons that weren’t immediately clear, the Trump Administration is asking Walgreens and CVS to wait at least another week before vaccinating folks in those facilities. Health and Human Services commissioner Alex Azar denied there was a delay, but the CVS CEO insisted there was. There was a lot of confusion (no! gasp! Under the Trump administration!), but it turns out, the delay is so that consent can be procured from families before giving the vaccine to older folks. It’s unfortunate that this was not ironed out previously — we’ve had weeks to figure it out! — because it will invariably cost a lot of lives. Upwards of 3,000 people a day are dying, and the majority of them are in those long-term care facilities.

But then again, the Trump Administration has been way too busy trying to overturn an election than deal with the greatest threat to the nation’s health in 100 years, which is why the Trump Administration is only now starting to ramp up a public education campaign about the vaccine. They’re spending $250 million to educate the public about the vaccine’s safety after having abandoned their original idea, which was — I kid you not — to have mall Santas promote it in PSA in exchange for early access to the vaccine. JFC.

Meanwhile, once health care workers and nursing home patients are vaccinated, the vaccine is supposed to go next to those who are higher at risk and essential workers. However, a solid plan hasn’t been put in place for establishing priority, which means that a lot of people will be cutting in line. It’s all going to depend on the honor system, and the honor system works for sh*t in America. It should probably go without saying, too, that wealthy people will invariably find their way to a vaccine quicker than the rest of us. Jeff Bezos ain’t waiting in no line at CVS for his, I guarantee you. The cast of Riverdale will almost certainly get the vaccine before the cashiers at Trader Joe’s.

Meanwhile, because Congress has not yet provided COVID relief — and a bill is still far from uncertain — states are looking to cut their own budgets (in education, fire, etc.) in order to pay for vaccination efforts. The Democrats are trying to figure out whether they can accept a relief bill without additional funding to state and local governments, which would be providing those funds for vaccination clinics, etc. We really could use another two votes in the Senate, Georgia (early voting on those runoff elections begins today, by the way).

AND YET, despite the disasterf*ck of the Trump Administration, Dr. Anthony Fauci — who will be working in the same capacity under the Biden Administration — thinks that your regular Jane and Joe will be getting their vaccines by the end of March. Fauci clearly has a lot of faith in America (and Biden), and you know what? F**k it: I join him in this!

Dr. Fauci says Americans with no underlying health conditions should expect to get a COVID vaccine at the end of March or the beginning of April: pic.twitter.com/Ofqk3cZHLE