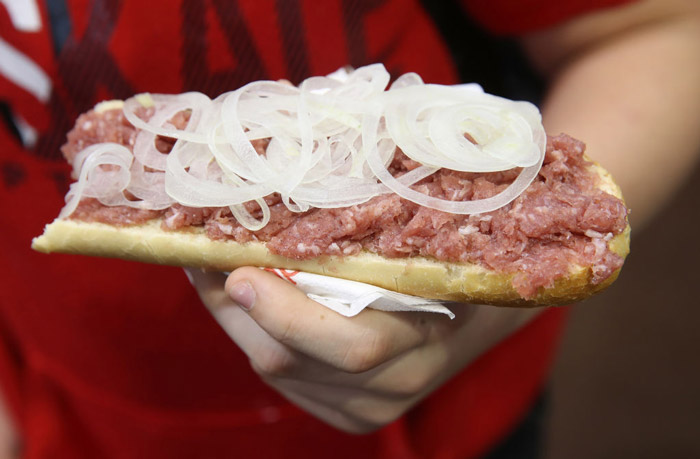 The pandemic continues to rage through America, thanks in no small part to many who refuse to accept health advice based on facts from experts. Now, the debate over science versus “freedom” has taken on an unexpected new form, thanks to a controversial declaration: don’t eat raw meat.

For many, that may seem pretty obvious advice, as raw meat could carry dangerous bacteria like Salmonella, E. coli O157:H7, Campylobacter, and Listeria. However, for a subset of American culture, slapping some raw onions and rye bread on some raw beef is enough to consider it a delicacy worth the risk. That’s the Cannibal Sandwich, also known as a “Tiger Meat.” When the Wisconsin Department of Health Services tweeted that people shouldn’t indulge in this potentially hazardous holiday treat, debate raged on Twitter.

For many #Wisconsin families, raw meat sandwiches are a #holiday tradition, but eating raw meat is NEVER recommended because of the bacteria it can contain. Ground beef should always be cooked to 160 degrees! Get more holiday food safety tips: https://t.co/h3fi4TfPye #foodsafety pic.twitter.com/jDqmkt6uOU

To some, the Cannibal Sandwich was a shocking revelation.

I'm sorry, what? I lived in Wisconsin for 15 years, never heard of this.

……are people in wisconsin okay https://t.co/5OYk7m5bTA

Others confirmed the tradition, shared its origins, or otherwise defended the practice.

I've been eating raw hamburger for over 50 years. Put a little salt and pepper on it and pop it in your mouth, yummy.

(not a whole patty, just the little bits of leftover. And fresh. It needs to be very fresh.)

My Dad's German family did this every Christmas eve. Raw beef (that Oma ground up herself) and onion on homemade rye. So gross, but they loved it.

Exactly! I’ve had it with my Wisconsin relatives and I’ve never had an issue.

I was given a Mettbrot at a reception in Germany in the 1980s. Took a bite. Realized it was raw meat. Was then told it was pork, and reassured with, "Don't worry about the worms, we've all got 'em!" Did not finish the Mettbrot. (No trichinosis to date.)

Others argued that robust tradition aside, it is nonetheless potentially dangerous.

Nowadays when dozens of animals are in your package of ground beef, this is like playing Russian roulette.

There is a right way and a wrong way to prepare raw meat for safe consumption. For instance, you might love sushi, but you shouldn’t leap to the conclusion that you can grab some plastic-wrapped filets from the grocery store and make your own. However, social media is not the place for the nuance of proper meat procuration and preparation, so the DHWSI issued a blanket warning. Notably, even the USDA has come out against Cannibal Sandwiches.

USA Today reports the organization’s statement on the controversial cuisine:

“If cannibal sandwiches are a tradition in your home, try this safe alternative: cook the ground beef with the same spices and toppings, until it reaches 160°F, and serve it on top of bread or crackers. You may be surprised to find that it tastes better when cooked! Not to mention, you won’t be risking a trip to the hospital with every mouthful.”

The USA Today piece also notes that Wisconsin alone has suffered eight outbreaks linked to the eating of Cannibal Sandwiches since 1986. One salmonella outbreak in 1994 affected more than 150 people! Now, put such a potential outbreak into the context of the COVID pandemic.

By engaging in this culinary tradition this season, you could contract a bacteria that would require a hospital visit, during a time where hospitals across the country are being pushed to the brink because of rising COVID cases. Essentially, the risk of eating raw beef is even higher this year, because a hospital may not have the capacity for you, much less a whole family of Cannibal Sandwich eaters. So, rather than risk putting yourself and your loved ones at risk, and thereby binding up an already stressed health care system, skip the tiger meat, or at least cook it.

← As the First Vaccine Is Administered in the U.S., Hope Is Tempered by Confusion | Review: Reflective 'Small Axe: Alex Wheatle' Works Better as a Piece of a Puzzle than a Standalone →