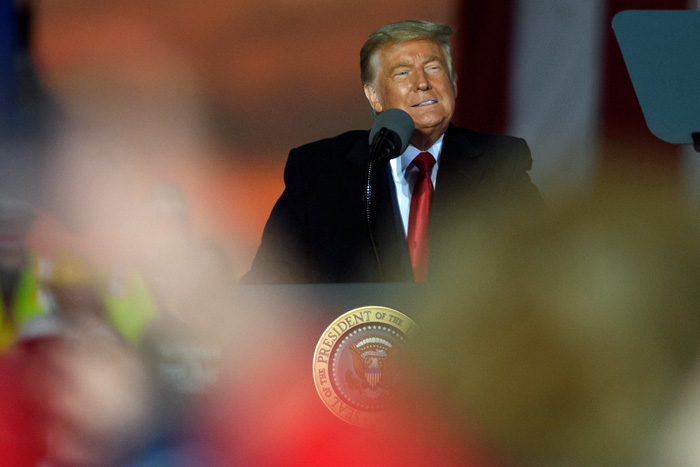 Trump Left Another Crowd Out in the Cold, This Time in the Battleground State of PA (Smart!)

Remember not even four days ago when Trump’s campaign bussed a bunch of people to a rally in Omaha and abandoned his own supporters with no way to get back? The asshole did it again in Butler, PA last night. And the sad part is these idiots will still vote for him while he’s pissing right in their faces. (Newsweek)

Ellen Pompeo doesn’t pull punches on how Grey’s Anatomy has been “broken” so many times by “bad male management.” (Lainey Gossip)

Grimes says her 5-month-old baby is really into “radical art” and is a big fan of Apocalypse Now. Nothing concerning there! (Dlisted)

Aunt Becky checked into prison early so she can be home for Christmas. Really don’t understand why people say our justice system is racist. I just don’t see it! (Celebitchy)

Here’s a fascinating interview with our own Nicole Edry and her tips on developing serenity during anxious times. (Medium)

And she passed along this piece on Toyin Ojih Odutola and Yaa Gyasi with the following endorsement. “Damn these two are cool as hell - also crazy smart and talented pioneers, NBD.” (Harper’s Bazaar)

When you accidentally nail the costume pic.twitter.com/eWAyvWV0ua

One of the cops who murdered Breonna Taylor is now suing her boyfriend for “emotional distress.” What the f*ck? (CNN)

John Mulaney’s SNL monologue is not going over well thanks to his awkward “both sides” joke, and honestly, it was surprisingly weak for a dude who’s easily one of the top stand-ups right now. (Daily Beast)

Anne Hathaway had the best reaction after being asked to give Zoe Kravitz advice on playing Catwoman. (Collider)

Have you wondered if there’s a trick to spending less money and having more fun? Kniki picked up Annie Raser-Rowland and Adam Grubb’s The Art of Frugal Hedonism to find out. "Some of the chapters do still have practical tips like getting around on a bike or foot instead of a car…however, unlike most other books or articles about being frugal, there’s always an underlying tone of just having a good ole’ time. (Cannonball Read 12)

← 5 Shows After Dark: 'Roadkill' Premiere PBS, 'Treehouse of Horror' on Fox | One More Time, with Feeling: The Cruelty is the Point →