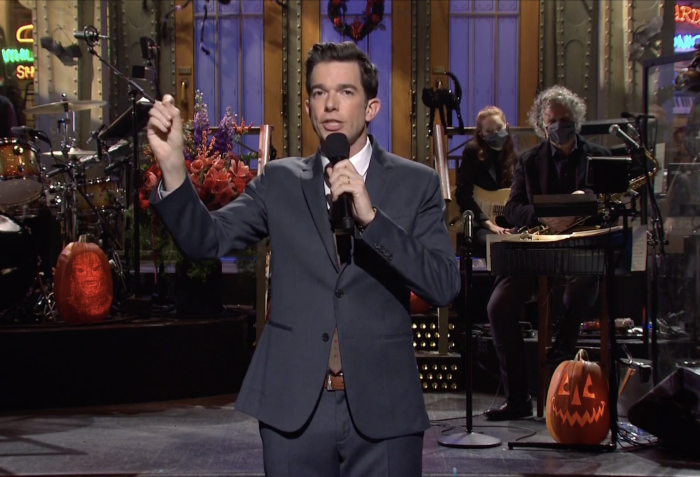 Cold Open — Joe Biden delivers a Halloween message by reading a Trump-inspired Edgar Allen Poe poem. If you are feeling anxious, do not watch it. It offers no comfort whatsoever, as it is mostly about how Biden is leading in all the polls, but will probably lose anyway. Jim Carrey’s Joe Biden is so bad. TOM HANKS WOULD HAVE PROVIDED US COMFORT. JASON SUDEIKIS WOULD HAVE AT LEAST MADE US LAUGH. GOD. (Score: 2 out of 10)

John Mulaney Monologue — John Mulaney is one of the best comics in America. He always delivers. This is no exception. (Score: 8 out of 10)

Cinema Classic — Cinema Classics is hit-and-miss, but it’s usually more hit than miss when Mulaney and Kate McKinnon are involved, and here the two take on Hitchcock’s Birds, or “the floppy, floppy things that are trying to kill everybody.” (Score: 5.5 out of 10)

Strolling to the Polls — Keenan, Ego, Chris, and Punkie perform an upbeat song about going to the polls, but all the polls are … closed, and when they finally find a polling place that’s open, the line is hours long and there are white supremacists poll watching. It’s funny because it’s true (but also 😢 😢 😢). (Score: 5 out of 10)

Dave Chappelle is hosting next week. He hosted the Saturday after last the 2016 election. I don’t know if this is a good or bad omen.

Sleepy Hollow — It’s 1790. Ichabod Crane encounters the Headless Horseman holding his own decapitated head. Ichabod’s only concern is … can he use his head to, you know, blow himself? And what are the logistics of that? It is not a joke that can sustain an entire skit, but it comes very close! I probably don’t even have to say this, but this is easily the Mat skit of the night, and probably of the season. (Score: 7 out of 10)

New York Ad — It’s mostly like a normal ad promoting New York, only there’s also a weird, kooky old lady played by Kate McKinnon to remind us of what New York is really all about. I wish it were a good skit, but it’s not. (Watch Here) (Score: 3 out of 10)

Weekend Update — It’s a short “Update, but there are some solid political jokes from Che and Jost, with an unqualified endorsement of Biden from Jost. Kyle Mooney also appears as Baby Yoda, in case you were wondering if Baby Yoda could be completely and horribly ruined. (Watch Baby Yoda here, or better yet, don’t). (Score: 7 out of 10 for “Update,” -5 out of 10 for Yoda).

Time’s Square Souvenir Store — Here we go! Another Broadway-esque musical sequel to Lobster Diner, this one about the I Heart New York underwear in a souvenir store. It’s not quite as good as previous Mulaney musicals, but the Les Mis finale is sufficiently rousing. (Score: 7 out of 10)

Brenner Goods — Mr. Brenner has been meme’d by his nephew again! Skip it, unless you’re 13, in which case you’ll probably enjoy it (go ahead and watch it, Lil Axl). (Watch Here) (Score: 3 out of 10)

Democracy PSA — This one was cut for time, although I have no idea why they didn’t air it instead of the New York promo. It’s much, much better. (Score: 6.5 out of 10)

← 'Justified' 10th Anniversary Of A Harlan County War Between Two Men Who Dug Coal Together | Review: 'The True Adventures of Wolfboy' Is A Must-See Coming-Of-Age Fantasy →