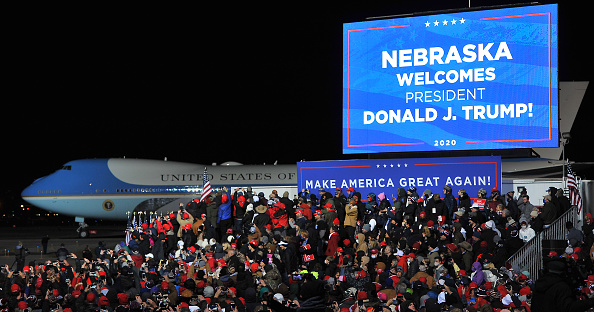 Trump Abandons Rallygoers, Who Are Stranded for Hours in Freezing Temperatures, Pissing Themselves

Let’s first cover a few housekeeping items: If you have an absentee or mail-in ballot, please do not mail it in. It’s too late. Drop it off in a ballot box or the clerk’s office, or surrender it at the polling place and vote in person on Tuesday.

Second: Please vote. This is true of everywhere, but this is especially true in Michigan right now, where Biden’s lead is a little more tenuous and where Democrat Gary Peters has a 10 point lead over Republican John James, but some are saying that the environment in Michigan is such that James could pull off a surprise victory. Please don’t let him do that.

And the reason that’s so important is because, if the Democrats do not win the Senate (and the White House), the economy is going to go over a cliff. Coronavirus cases are surging, and we’re seeing hospitals fill up, and Trump has absolutely no plan to counteract what’s happening. It’s getting very bad.

The US reported 73,240 new Covid-19 cases and 985 deaths on Tuesday, according to Johns Hopkins University.https://t.co/qbECdA7ybX pic.twitter.com/IPz5c4bMLZ

Trump is trying to complain that things aren’t that bad, and that the media talks about the Coronavirus too much, and that all the reporting is negative, but there have been over half a million cases in the last week alone. A thousand people a day are still dying. We need targeted lockdowns, and we desperately need money for schools to safely keep them open, and small businesses to keep them afloat. We need a stimulus package, and Mitch McConnell just recessed the Senate until after the election, and everyone in the GOP is suddenly all about “the deficit.” If Trump loses, we’re not going to get any votes from Republicans for a stimulus bill. They will drive the economy into the shitter to make Democrats look bad, even if that means screwing over schools, police departments, fire departments, restaurants, and other small businesses. They are not good people.

We’re not likely to get a new stimulus bill unless and until Biden takes office in January, and Democrats hold both Houses of Congress. December-to-vaccine is going to be a very hard time in America. If we don’t have a stimulus bill, y’all, won’t be returning to school after the break — those two glorious half days we hybrid parents have will vanish! If your state is getting money to provide full-time childcare for your kids outside of school, that’s gone, too. From my understanding, in fact, the schools have to spend all that money from the first stimulus bill by the end of the year, meaning — I think — that there is nothing lined up after the new year to provide for all those extra teachers we need right now.

Meanwhile, Trump is not helping his case. In addition to the skyrocketing COVID numbers in the midwest, which has allowed Biden to open up a SEVENTEEN POINT lead in Wisconsin, according to a Washington Post/Axios poll, the Wall Street Journal says that they have “found no evidence, so far, of the kind of late surge toward President Trump among undecided voters that helped produce his unexpected wins in 2016.”

I don’t know how Trump thinks this is going to help him, either, but in addition to taking away valuable job protections from thousands of civil service employees last week, he’s attacking science again, removing the “chief scientist at the National Oceanic and Atmospheric Administration, the nation’s premier scientific agency, installed new political staff who have questioned accepted facts about climate change and imposed stricter controls on communications at the agency.”

Elsewhere, is this how you win over suburban women?

A century after the 19th Amendment, Trump tells Lansing crowd, “We’re getting your husbands back to work."

Finally, do you want a man running the country who can’t even properly arrange a rally without putting his own supporters at risk? I mean, it’s one thing to hold rallies where supporters do not wear masks and do not socially distance, but last night, Trump forgot about simple logistics, like providing proper transportation for supporters returning to their cars after the rally from an airport tarmac.

Thousands of people left out in the cold and stranded in #Omaha, #Nebraska after a #Trump rally. I’m told the shuttles aren’t operating & there aren’t enough busses. Police didn’t seem to know what to do. Some walked. I saw at least one woman getting medical attention. pic.twitter.com/oIkmixaZt0

The above video & this one were taken around 10:15pm. The #Trump rally ended around 8:45pm. Some just gave up and walked from the airfield, back to wherever they parked. It was about 32° out at the time. Many had already spent hours outside as they waited for POTUS to arrive. pic.twitter.com/JYXCLypTQl

Trump held a rally at an Omaha airfield. He bussed in the supporters. After, he flew off in Air Force One, abandoning the attendees in the freezing cold with no buses. Omaha PD had to clean up his mess. Multiple people transferred to hospital for hypothermia or related problems. https://t.co/Pu4LjtIk5O

The news accounts from that disaster are pretty insane; some folks who had been standing there for hours apparently threatened to releive their bladders right there on the tarmac.

Another officer advising they have an elderly male down.

Is this whole thing not just the most apt metaphor for Trump’s four years in office?