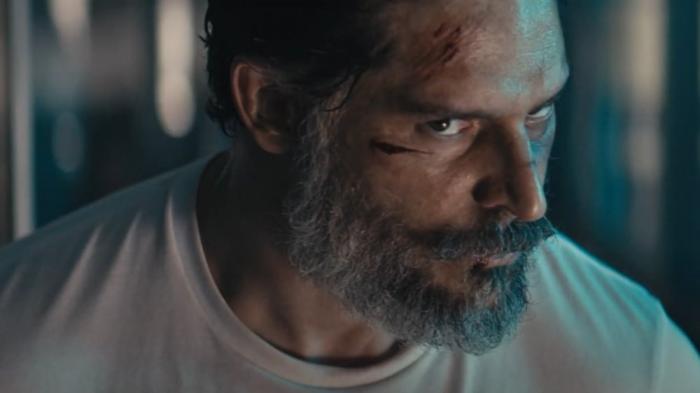 Review: 'Archenemy' Is No Antidote To The Gritty Superhero Wave

“Gritty” is a hot word often forced off our tongues. Not just because of the Philadelphia Flyers’ meme-able mascot, but because superhero media really grasped onto this style. Clutching onto the comic book work of creators like Frank Miller, superhero films and shows have leaned into the grit. Films have ranged from being shot in grayscale in punishing rain to subverting tropes for grounded takes on super-powered people. In this world filled with Snyder Cuts and The Boys comes Archenemy, and there just might not be room for it.

Coming off the success of Daniel Isn’t Real, Archenemy co-writer/director, Adam Egypt Mortimer, seems to have officially cultivated his personal style. Aside from the inter-splicing of animated art and live-action, and placing bright jewel tones atop high contrast reds and blacks, Mortimer is back with a mind-bending tale that uses the questioning of reality to suggest the fantasy might be a metaphor.

Joe Manganiello stars as Max Fist, a self-proclaimed superhero, who says he ripped through space and time and fell to Earth after desperately trying to save his homeworld, Chromia. Now, between glasses of whiskey and punching brick alley walls at a dive bar, Fist spends his time groaning about his nemesis, Cleo (Amy Seimetz). His ramblings are mostly dismissed as the thoughts of a troubled homeless man until Hamster (Skylan Brooks) asks to profile him for his new project.

Hamster is an urban kid desperate to break into the lucrative world of social media journalism. He’s approached a Buzzfeed- like company and sold them on his pitch of profiling the city’s most interesting people. His first mark: Max Fist. While profiling him, Hamster starts to take the ramblings of this mysterious man seriously, believing he is a superhero, aged rapidly by the Earth’s sun. Hamster tests the strength of his new anti-hero chum with scientific experiments like hitting Fist with a car. However, what could seem like supernatural invincibility is undermined with a realistic explanation that nods to The Terminator and its incredulous cops. Fist was snorting PCP.

Much like Daniel Isn’t Real, Archenemy forces you to keep guessing what’s real and what’s a delusion. Max Fist doesn’t present as a standard hero. He presents as a destitute homeless man. His teeth are falling apart, he vomits pretty often, he wears an old coat, loves alcohol and drugs, and spends time mumbling wild stories. Yet, the fantasy he presents of a distant land in another reality appeals to two kids who’ve been forced to parent themselves in an unforgiving city.

Hamster’s sister, Indigo (Zolee Griggs) wants a different life for her brother. She aspires to do right by their late parents and put her brother through college, so she’s taken on precarious drug dealing and cash mule-ing. When Indigo gets in a bit too deep, she needs a hero. She’s taxed by her boss, Manager (Glenn Howerton), to collect a hundred grand from one of his most high-profile debtors (Paul Scheer). When things go sideways, Indigo looks to her brother to enlist the fallen hero on a mission to “punch through gunfire.”

The film plays with reality in a way that explains away the fantasy but allows it to be real enough to be representative of something more. Leaning on films like Birdman, confirmation of this reality doesn’t much matter. Fist’s animated flashbacks could be the delusions of a schizophrenic person or could be a peek into the unknown. The ambiguity of reality is the thin line between symbolism and explanation that Mortimer likes to dance upon.

Burly and charismatic, Manganiello is the perfect cast as a grumbling superhero, but he doesn’t get much to do. Mostly, his impressive build is hidden under a coat, save for a brief moment where he dons his hero look that reminds of his brief spin as DCEU’s Deathstroke. As for Seimetz, her Cleo is stellar, burying obvious pain under velvety line delivery that sells that she’s not of this world. I admire Mortimer’s restraint in saving her for the final act. However, her reserved performance as a fluttering villain is something you’ll wish was splashed throughout the rest of the film. Howerton shows up not just to chew the scenery but to choke and gag on it. He leaves just enough scraps for Scheer to snack on. But the heart and soul of the film are Brooks and Griggs, who deliver warm performances that blow up the tragedy of young children willing to believe in superheroes who have also been forced to be street savvy enough to understand drug dealing and gunfire.

The finale of Archenemy, where the pieces fall together, and questions of reality are chucked into the trash, is where it finally starts to shine. The performances are more desperate, and the heavy-handedness and hammy-ness of the spectacle come together in a swirl of pastel lightning. For the purpose of the story, it made sense to bury this until the final act, but for watchability, it should have spent more time on screen to compel bored audiences to remain engaged.

Once more, Adam Egypt Mortimer has delivered a beautiful film that bends reality with his specific take on manifestations of mental illness, but falls short of what M. Night Shyamalan did with the Unbreakable universe. Archenemy presents itself as the punk rock cousin to the flashy superhero film, but attempts to do so in a world where gritty and grounded takes are already in the mainstream. It unsympathetically plays the homeless superhero for gags, making it feel more like Hancock than the riskier moonshot takes like Joker. I’m just not sure there’s room for another grounded superhero story in 2020.

Archenemy comes to theaters, On Digital and On Demand December 11, 2020.

← Review: John Boyega Gives Career-Best Performance in Outstanding 'Small Axe: Red, White and Blue' | Jack Black Is Funny, Sexy, and Better Than Chris Pratt and We Should All Appreciate That →