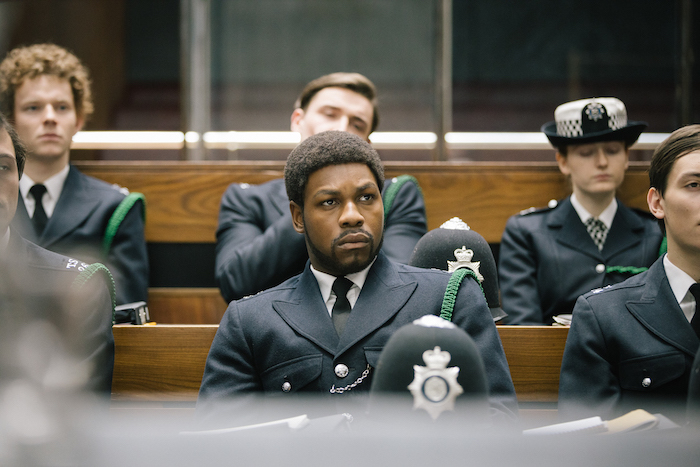 “See, if you take your time—don’t rush in—you will get your reward,” a character announces mid-Scrabble game in Red, White and Blue, the third installment of filmmaker Steve McQueen’s Small Axe film anthology series, in what also serves as something of an artist’s statement for the whole project. McQueen is very much a slow-burn filmmaker, and this is the sort of conversation-sparking film that slowly but steadily builds itself up to an utterly absorbing boil.

A masterful exploration of the personal as political, Red White, and Blue explores the tensions that arise within the Logan family after ambitious young Leroy Logan (John Boyega) decides to become a police officer in spite of father Kenneth’s (Steve Toussaint) ongoing legal battle with law enforcement following a baseless arrest and the well-earned animosity toward the police force throughout his community.

Toussaint gives a compelling performance as Kenneth Logan, the sort of proudly eloquent and compulsively self-censoring patriarch who would rather pass on the opportunity to further his Scrabble lead than use his lone “Y” to spell “SEXY.” He’s the poster boy for Black exceptionalism, but racist systems don’t care that you know your rights and dot your i’s and cross your t’s when you have the audacity to be a proud Black man. While he clearly believes in respectability politics, he has no respect for those institutions who have never respected him, such as the police. He abides by the law, but he knows his rights, and won’t stand quietly by when lines are crossed, like when two officers falsely claim his truck is parked improperly. When Kenneth gets out a ruler to demonstrate that he knows the laws and that he has abided by them, the police respond with violence, sending him to a hospital bed with his eyes swollen shut.

Leroy holds himself to similarly high standards as his father. He’s brimming with ambition to not just accomplish something for himself, but for his community, and finds his current work pursuing laboratory science unfulfilling. In many ways, Leroy clearly emulates his father but has a very different idea of how to best live up to these closely related aspirations. Wanting a job where he can seek change while being actively involved with the community, he applies to the police academy. Kenneth thinks Leroy is compromising himself and delusional to think he might actually change anything, while Leroy sees his efforts as a necessary crusade.

“I just feel like someone’s got to be the bridge,” Leroy tells a Pakistani colleague also struggling with his path. Everything Leroy faces evidences the need for change—and the enormous, even insurmountable obstacles facing him. He sees with crystal clarity the urgency of his efforts even as he becomes increasingly aware that they might very well be futile within a system that has no actual interest in changing, and that his efforts to build this bridge come at an incredibly high cost in terms of personal relationships.

The screenplay, co-authored by McQueen and Courttia Newland, handles the controversial subject matter superbly, realizing that much of the fascinating tension between father and son comes not from their differences, but their similarities. While characters judge each other for their choices, the screenplay puts Kenneth and Leroy on equal footing. The stakes aren’t about one being proven right and the other wrong but seeing if father and son will be able to maintain a meaningful relationship or whether the opinions that separate them will prove too great an obstacle.

Red, White and Blue shows Steve McQueen as a filmmaker at the top of his game doing what he does best—telling deeply empathetic stories that explore critical social issues without sermonizing or flattening characters into mouthpieces but by creating incredible portraits of actual lived experience. McQueen goes the extra mile, with help from Boyega’s incredible performance, to not just show Leroy’s life but give viewers a glimpse of what it’s like to live in his shoes, from microaggressions to moments of code-switching, like when Leroy prepares for a work assessment with his wife, shifting between polished, formal descriptions in preparation for how he’ll speak at work and a more comfortable vernacular because ultimately he’s still at home.

On the subject of John Boyega, there’s no question that the Star Wars sequel trilogy did its POC (and to be honest, most of its characters) dirty, but seeing him shine here really drives home the caliber of the talents that were grossly neglected. The genius is in the details, the way he and McQueen are able to utilize small moments in a way that really lets us step into Leroy’s shoes. The conflicting emotions in Leroy’s face when he sees himself in a police constable’s uniform. Walking down halls lined with portraits of old white men, one after another after another—not belonging, and yet feeling like by going where he’s not welcomed, he might, just maybe, be able to make a meaningful difference. It’s a catch-22 with no good answer, and Red, White, and Blue knows better than to attempt to come up with a solution. Instead, it posits the question with incredible nuance into a bold and brilliant film that is sure to spark crucial conversations.

← I'm Never Going Back in the Ocean Again | Review: 'Archenemy' Is No Antidote To The Gritty Superhero Wave →