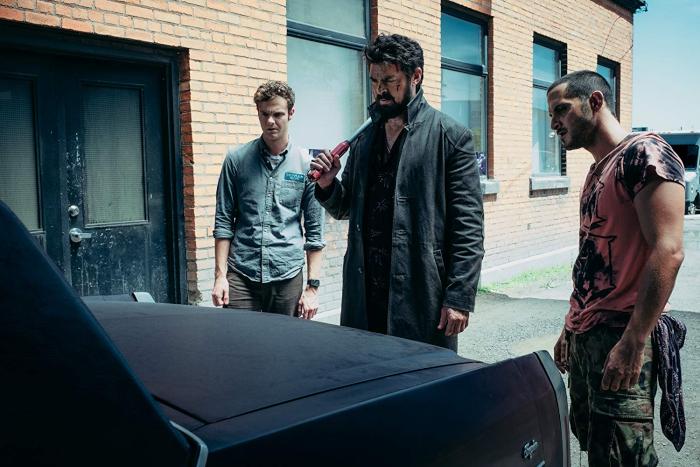 Review: 'The Boys' Has A Lot To Say About Superheroes, Celebrity, #MeToo And The Military Industrial Complex (If You Can Stomach It)

The most surprising thing about Amazon Prime’s latest original entry, The Boys, is that it’s based on a 13-year-old comic book series and didn’t burst fully-formed onto the platform as an answer to our collective frustration and unease with Disney’s omnipresence. Because let’s face it — the series that landed on our screens just a few days ago feels fresh. A world saturated with superheroes, controlled and commodified by a single behemoth of a corporation? Gee, that sounds familiar. The only difference between the world of The Boys and our own is that these superheroes aren’t just actors in costumes, playing comic book characters. They’re real people, with real powers — people for whom “hero” is more of a job title than noble calling. But other than that, they’re just as focus group-tested and PR polished as our own stars in capes.

Oh, and the company that runs them, Vought, is interested in more than endorsement deals and theme parks. They’re a defense contractor, and “supes” could be the latest and greatest arms race.

Co-created by Garth Ennis (“Preacher”) and Darick Robertson (“Transmetropolitan”), The Boys was a gleefully raunchy and brutal comic series about how great power comes with great temptation, and great privilege comes with a great chance of absolute degeneracy. If you had all the popularity of a boy band in its prime, a coterie of professional fixers hired to cover your tracks, and actual superpowers at your disposal, could you honestly say you wouldn’t at least consider indulging in the occasional drug-fueled orgy? The problem, of course, is that when you know you could literally get away with murder… sometimes you ACTUALLY get away with murder. And that’s where the titular Boys come in — a clandestine group of CIA-backed, crowbar-toting agents tasked with monitoring these superheroes and keeping them in check while also investigating the many coverups of their corporate overlords at Vought.

I loved the comic series for being, well, excessive, but it was not without its problem areas — especially in its depiction of women. What can be played off with a wink and a smirk on the page may not translate so easily onto our televisions, especially in 2019, and that’s why I was especially interested to see how showrunner Eric Kripke (Supernatural) and exec producers Seth Rogan and Evan Goldberg (who previously brought another Ennis comic, Preacher, to our screens) would tackle this material. There’s no doubt it’s timely, considering our own cultural superhero obsession — but could they make it more palatable?

And the answer is yes, for the most part. From the get-go, The Boys is breezy and unpredictable, easily telegraphing the extent of its humor and its violence, from the tiny shrinking supe who runs headlong into someone’s vagina to the other superhero who runs headlong into the protagonist’s girlfriend — turning her into a cloud of blood and bone mist. And yet, the excess doesn’t feel excessive, if that makes any sense. The show knows how to go for the shock value, but also knows that with shock, quality can be just as impactful as quantity. Why have three supes pull a Weinstein and demand blowjobs from their newest female colleague (as it happens in the comics) when one would prove the point just as well? Several characters have been gender-swapped, and one even gets un-fridged, just to up the number of women in the narrative, while some of the more over-the-top graphic elements have been stripped away, or at least toned down. But even when some of the alterations are less than successful, I can at least appreciate why they were attempted — and they’re outweighed by many of the other boxes the show manages to tick.

That cloud of blood and bone I mentioned? That would be Robin, who becomes collateral damage of a passing speedster named A-Train (Jessie T. Usher). It’s Robin’s luckless boyfriend Hughie (Jack Quaid) who witnesses her demise and becomes our main point of entry into this ugly little tale: a former fanboy who is traumatized by what he’s seen, and who is offered an NDA and hush money to never talk about it again. Then into his life struts Billy Butcher (an unbelievably attractive Karl Urban sporting a sloppy British-ish accent), a man with a personal bone to pick against superheroes and a plan to lie, spy, and blackmail his way into a little payback against Vought itself, provided he can put together a team to help him. Thus Hughie, the novice, joins Butcher’s team of more experienced and dangerous mercenaries, including Frenchie (Tomer Capon), Mother’s Milk (Laz Alonso), and — eventually — a feral mute woman called The Female (Karen Fukuhara), who just might be the most dangerous one of them all.

A-Train is a member of a Justice League-ish team called The Seven, led by a deranged superman (lowercase “s”) called Homelander. Down a member, The Seven recruits a fine, upstanding new hero called Starlight (Erin Moriarty) to join their ranks, making her dreams come true — and then those dreams are immediately dashed when the aquatic hero called The Deep (Chase Crawford) drops trow on her first day and demands oral sex. Starlight’s growing disillusionment with the unheroic reality of superheroics becomes our second point of entry into this world, and to the show’s credit it seizes this workplace #MeToo moment and turns it into an opportunity to explore the celebrity apology PR mill, as Vought attempts to save face by taking the side of whichever hero is polling better in the public approval ratings and Twitter mentions that day.

[For what it’s worth, while I think the show handles Starlight’s storyline far better than the comics did, but I think its alterations to The Female are a bit of a disservice to the character. The show takes pains to invest her with an origin and a real name, but in doing so it hands her a victim narrative and strips her of her mystery. It also delays her introduction, which means she’s not an equal part of the action or the team. I appreciate the instinct to give The Female more substance, but the execution actually diminished her impact. Still, in any form The Female is the strongest, fiercest fighter on the team, and is more than just the token female her nickname hints at.]

Over the course of eight episodes The Boys uncover drug abuse, illegal experimentation, murder, laser-babies, and a couple of vast conspiracies that could shake society to its core. But despite evidence that The Seven aren’t the heroes they’re supposed to be, Butcher’s single-minded determination to bring down Homelander and his prejudice against all supes proves that perhaps The Boys aren’t exactly the good guys either. Add in some fantastic cameos (including Simon Pegg, who was the inspiration for Hughie in the comics, and even BILLY G*DDAMN ZANE) and a cliffhanger ending that’ll definitely throw fans of the source material, and The Boys mostly holds its own alongside your more traditional comic book fare. In crafting a nasty, nihilist punch-em-up where everyone gets their hands dirty and the moral high ground is a f*cking joke, The Boys actually underscores the same kind of message found in most superhero tales: that capes and powers have nothing to do with good and evil, and doing the right thing is never easy. And yet, it’s not really about superheroes at all. It’s about celebrity, and the companies that commodify a person’s image. It’s about monopolies, and perfectly vetted stories replacing the truth. It just does it all with, you know, laser-babies. And blood mist. And some truly terrible people doing some effed up sh*t, occasionally with crowbars and butt bombs. Oh, yes. There are butt bombs.

← The 'Best' of 'Men Writing Women' | Spoilers: How 'Orange is the New Black' Ended After Seven Seasons →