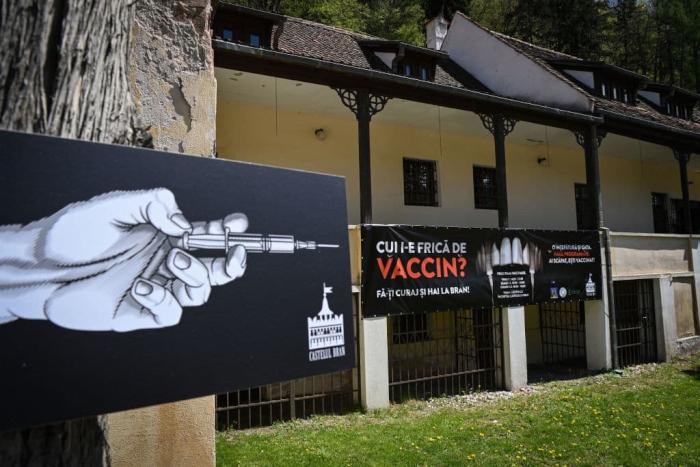 Come Get Vaccinated at Dracula's Castle! It's Definitely Not a Trap Set by Hungry Vampires...

The COVID-19 vaccine rollout is happening worldwide right now, signaling a hopeful return to normalcy for the rest of 2021. Some local governments have set up their vaccination stations in notable public spaces, but we think Romania has all of them beat.

Say, are you a wandering visitor through the historic lands of Transylvania? Are you in need of your shot? Do you want to hit two birds with one stone and get vaccinated while also taking in one of the most iconic attractions in the country? Then look no further than Bran Castle, one of the potential inspirations for Bram Stoker’s iconic novel Dracula. As part of a drive by the Romanian government, they’re offering a unique chance to be inoculated at the 14th-century castle in the Carpathian mountains!

OK, here’s the thing. Bran Castle really has no tangible connection to Stoker’s novel, and its connections to Vlad the Impaler are also pretty vague. Also, Stoker was never directly inspired by the story of Vlad Tepes. The connection between the fictional vampire and the historic voivode of Wallachia didn’t appear in fiction until the Turkish translation of Stoker’s novel basically rewrote the story with some heavy nationalistic undertones (I have a podcast about esoteric vampire pop culture: can you tell?) Still, Bran Castle actually fits the basic description of Dracula’s castle pretty solidly, and hey, if some Irish theater manager’s going to screw up the reputation of a country he never visited for centuries then they may as well make a few quid from it.

Medics with fang stickers on their scrubs are offering Pfizer shots to everyone who visits Bran Castle, and they’re leaning in HARD on the vampire connotations. It makes sense. There’s a long history of vampirism being used as a metaphor for infection. All that AND visitors will get free entry to the castle’s exhibit of 52 medieval torture instruments.

And it definitely isn’t a front for some nefarious vampire scheme. I’m sure of it. But that would be a pretty sweet plan. Just protect your necks while you’re there.