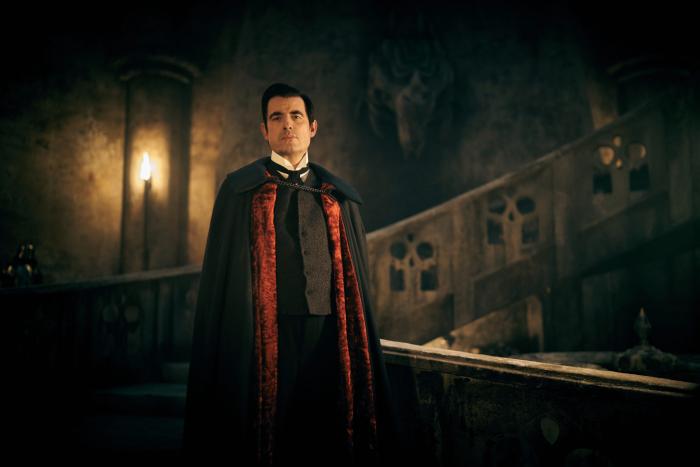 TV Review: Episode One of BBC’s ‘Dracula’ Is Full of Potential But Is Still a Steven Moffat Production

Oh, Steven Moffat. I quit you a long time ago and for damn good reason. For many years, Moffat always knew how to hook me with highwire acts of plotting and whip-smart dialogue spewing from the mouths of characters practically designed to be devoured by fandoms. Of course, the writer and showrunner of Doctor Who and Sherlock, alongside Mark Gatiss, also consistently fell trap to the same issues that arose from his favorites tropes. Those gripping plots quickly became over-complicated and unable to pay off their lofty promises, leaving Moffat to abandon ideas then blame audiences for caring. Those characters and their deliberately baity chemistry were always prey to the ‘no homo’ back-pedaling. Soon, the simple but irresistible appeal of his work disappeared. I gave up on Moffat around the third season of Sherlock and was happy to stay away until he dangled a true treat in front of me.

The BBC hasn’t done an adaptation of Bram Stoker’s Dracula since 2006, which added a unique twist to the familiar story but lacked the verve to pull it off. The character remains pop culture’s most iconic vampire and one of the most reimagined figures from the public domain, aside from Sherlock Holmes. It’s not hard to see why Moffat wanted to take on the Count in a new co-production with Netflix. Vampires are the perfect metaphor for everything that storytelling has to offer. They can stand in for every historical and contemporary concern, from sex and death to disease, racism, religion, and class. Vampires will never fall out of style for that exact reason, and neither will adaptations of Dracula, mostly because writers tend to not truly adapt the book. They just pick and choose the elements they like the most then construct their own themes and narratives around that. So, what did Steven Moffat and Mark Gatiss have to say that made Dracula the only means to do so?

Going from the first episode, I’m not quite sure. Adherence to the source material is clearly not a priority, but I highly doubt anyone would have expected that of them. There are familiar elements, such as an all-too-brief evocation of the novel’s epistolary structure, but it’s clear from the beginning that what Moffat and Gatiss want to do is what they did with Sherlock Holmes and Jekyll and Hyde, for better or worse.

Episode one of this three-parter opens with Jonathan Harker (John Heffernan) in a convent after escaping the castle of one Count Dracula. He is near death, bald, rotting, and deeply traumatized. A wise-cracking nun, Sister Agatha (Dolly Wells) asks him to recount his meeting with the mysterious aristocrat and the events that led him to her door (no Renfield here.) Harker has been sent to Transylvania by his employer to ensure their rich new client’s latest property deal is sorted out (one of my favorite things about Dracula is how, despite his status as a figure of unforgivable evil, he goes through all the channels to ensure his real estate purchases are legitimate, because he knows a good investment when he sees one!) Dracula (Danish actor Claes Bang) lives in an impossible labyrinth of a castle and Jonathan knows something is going on, especially as he starts to age rapidly while his host gets younger and snarkier.

Moffat got fans riled up before Dracula even premiered by saying that his Count was not bisexual but ‘bi-homicidal’, a quote that, even by the hardcore queerbaiting no-homo standards of Moffat, was especially hilarious. For a man who seems genuinely resentful of the queer readings his audiences desire from his work, he sure does love to write blatant homoeroticism. Within five minutes of the first episode, Agatha asks Jonathan if he and Dracula did the nasty, and Dracula frequently refers to him as his bride. This is not subtext: This is straight-up text that demands your attention, and any positive readings the audience could have taken from the possibility of a giddily sexually fluid villain fall flat because of Moffat’s own words and history. Indeed, watching Dracula when you’ve seen enough Moffat productions cannot help but be foreboding in a way that distracts from the series itself. You’re just waiting for the moment when Moffat’s gonna Moffat.

Claes Bang is, to put it bluntly, so f**king handsome and charismatic that you wouldn’t blame any of those nuns for tossing off their crosses and offering to join him in the horizontal monster mash. Bang is the kind of actor who can pull the most mediocre work into watchable territory through the sheer pull of his charm alone. It’s not that he’s bereft of material in Dracula. We see the interesting class dynamics of his character at play and an especially interesting twist on the character’s disdainful desire to assimilate into acceptable English society. The problem is that the vast majority of his dialogue sounds like lines that Moffat cut from Matt Smith’s Doctor Who run. Every scene feels like a one-liner highlights reel for Dracula. The puns I can take since vampires aren’t vampires without puns, but there are moments here that wouldn’t feel out of place in a Carry On comedy. Frankly, Dracula does not need to be this sassy, and all it does is dilute his nature as a threat, even when Bang, who’s having the time of his life here, gives it his all to evoke the character’s primal ferocity.

As with all Moffat shows, it’s especially irritating to be distracted by these tropes because there are things in here that are really interesting. The Gothic styling of the castle evokes old-school Hammer horror in a way that feels retro but not kitsch, although the series is also thankfully happy to ham it up a little now and then, leaning more into pulp than prestige. The series’ take on vampirism leans heavily on its parasitic nature and the trauma that causes Jonathan, something that most adaptations of the novel skip over. Some of the body horror is appealingly repulsive and you do get to see Claes Bang naked and covered in blood. There is a lot here to cling to, even though the most exhaustingly Moffat-esque pitfalls. The episode ends with the implication that the well-known characters from the book featured so far won’t be part of the rest of the series and that does intrigue me, despite myself. This is the Moffat conundrum in a nutshell. It’s not hard to see why even the biggest cynics have trouble quitting him. It’s obvious that something bigger is being set up here and I can’t help but want to know what’s going on, even though I’m reasonably sure the payoff won’t be anywhere near satisfying since they seldom are with Moffat.

Still, it’s Dracula, and I swore my allegiance to him a long time ago, despite myself. I survived the Gerard Butler Dracula. I can survive this.

All three episodes of Dracula will be broadcast over three consecutive days on BBC One, then they will be released on Netflix on January 4th. Stay tuned for more Dracula thoughts, because this is my favorite thing to talk about!

← Video: Henry Cavill Reads 'The Witcher' | What Happens In The First Two Minutes Of Netflix's Most Popular 2019 Movies? →