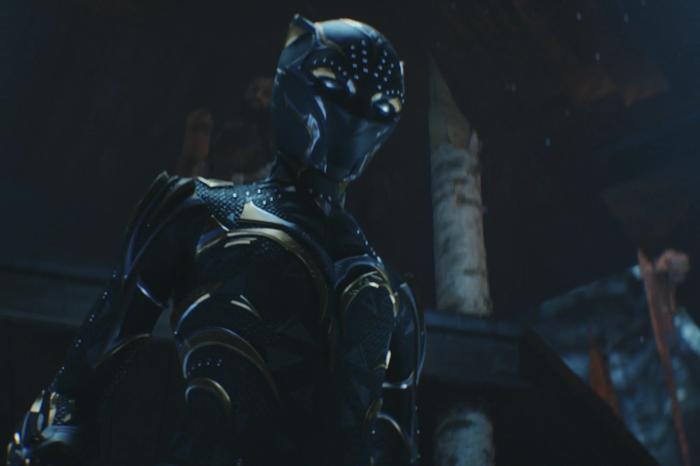 The First Reactions To 'Black Panther: Wakanda Forever' Are In

When I wrote about Black Panther and its purple-carpet premiere back in 2018, I discussed how lovely and amazing the cast members looked, as well as the many other celebrities who arrived at the premiere to see the film, to show their support, and to stunt for all of the cameras while looking sharper than Wolverine’s claws. Thanks to the #BlackPantherSoLIT hashtag that was created going all the way back to pre-production and casting for the original film, anticipation was extremely high, and fans were counting down the days until they could finally see Black Panther for themselves and discover if it truly lived up to the hype.

Since then … there have been so many ways in which the world has changed, and not all of them for the better. 2020 not only saw the beginning of the worldwide catastrof-ck that is the COVID-19 pandemic, but it also brought the shocking and heartbreaking news that actor Chadwick Boseman died from colon cancer at the age of 43. It was, and still is, a loss that his fans and his peers are still recovering from and trying to deal with.

Because Boseman was best known for his unforgettable role as King T’Challa, a.k.a. the Black Panther, one inescapable thought came to mind: What is Marvel and Disney going to do about the role of T’Challa, and how will it be handled in any upcoming films featuring the character of Black Panther? The idea of recasting the role is one that was discussed, and it continues to be a heated topic on social media. As to how Marvel, Disney, and Chadwick Boseman’s collaborators chose to handle his absence, and that of T’Challa’s? We regular-degular folks won’t find out for ourselves until next month, but those who were fortunate enough to attend last night’s premiere of Black Panther: Wakanda Forever got to see the film for themselves and find out how those questions were answered.

Despite the general mood at the film’s purple-carpet premiere not being as jubilant as it was back in 2018 for the premiere of Black Panther, it was still seen as a moment of celebration for all of the hard work by the Wakanda Forever cast and crew, and for the life and legacy of the late, great Chadwick Boseman.

Tonight we return to Wakanda.

Follow along to see who joins us on the purple carpet for the world premiere of Marvel Studios’ Black Panther: #WakandaForever. pic.twitter.com/rO3DEiZqPX

the #WakandaForever costumes are on display and they are BREATHTAKING!! Ruth Carter YOUR ATTENTION TO DETAIL!! pic.twitter.com/lVSEGUkyk2

Tenoch Huerta on the purple carpet for the premiere of Black Panther: #WakandaForever pic.twitter.com/pBtvFmqCcf

Hope you guys enjoyed #AbbottElementary ! Enjoy west coasters. Speaking of tonight’s episode, I’m at @MarvelStudios Wakanda Forever premiere with my little cuz. It’s beautiful here. Enjoy the west coast feed for me. I wouldn’t miss it for anything but this.

Rihanna also made an appearance at the Wakanda Forever premiere, alongside her partner, A$AP Rocky. She also recorded two songs for the film, “Lift Me Up,” and “Born Again,” which will be heard during the closing credits.

THIS WAS MY HEARTSTOPPER #WakandaForever pic.twitter.com/JidFl3YQ50

Rihanna was also photographed on the purple carpet with Taylor Simone Ledford, the widow of Chadwick Boseman.

Shortly after the premiere ended, critics began sharing their early reactions to the film.

Takes real artistry to make something as huge & expansive as Wakanda Forever feel intimate and heartfelt. All hail the mighty Coogler. Loved it.

Namor is one of the better villains the MCU has had to offer. Tenoch Huerta just kills it!

Emotions are heavy. Ryan Coogler ups his game on the action. It’s a lot to take in, balance so much, and is powerfully good. pic.twitter.com/NYxk1UvTYz

Black Panther: #WakandaForever is as epic as Marvel sequels get. The story is hugely ambitious & thematically rewarding with gut-wrenching twists and turns throughout. You feel the length but it’s fun, wildly beautiful and has the best credits scene in Marvel history, no contest. pic.twitter.com/zD8nYIFKXC

It's hard to shake the emotional weight #BlackPanther #WakandaForever carries throughout the entire film. More serious in tone, a wonderful conclusion to Phase Four. It celebrates women as the fiercest protectors of all. Angela Bassett. Tenoch Huerta. Michaela Coel. RIHANNA! pic.twitter.com/9V2gcmKJpA

Hotness factor: Namor is hot. If villain, why hot?

Coogler does it again with a really good villain.

With the loss of Boseman, I think we forget how every Black Panther appearance in the franchise has centered on loss. But this film teaches us a whole new way to mourn. I think a lot of fans need this. Others may want more, and that’s understandable. More will come.

#WakandaForever is outstanding. It handles loss, grief and revenge with a maturity and seriousness rarely seen in the MCU. Black Panther continues to be their crown jewel. Letitia Wright, Angela Bassett and Tenoch Huerta all bring some of the best acting I've seen all year. pic.twitter.com/ECqGxfEyFi

I saw #WakandaForever and trying to hold space to really gather my thoughts. Will share more soon but for now I will say it is a beautiful depiction of how grief and love co-exist, and the healing in the depths of some of our greatest pain. #BlackPanther pic.twitter.com/FVNrNdiCJh

#WakandaForever hits ALL OF THE NOTES you want it to hit. It gets the "pain" out the way early but that doesn't stop the emotional roller coaster. AND MY GOD, NAMOR!! The "m" word is FULLY USED.

#WakandaForever is exactly the cathartic experience I hoped it would be, helping us move past our grief while watching the Wakandans fight to do the same. The intro of Namor was incredible, the story bittersweet and packed with emotionally charged twists. pic.twitter.com/3k3AGYHXq7

WAKANDA FOREVER is a beautifully cathartic tribute to the legacy of Chadwick Boseman. Reminds us of his monumental impact & that he's truly still here with us. Great performances from Gurira, Bassett, Wright & Thorne. Huerta was INCREDIBLE. Loved Rihanna's song & Ludwig's score. pic.twitter.com/9eW6uFwP3S

What Ryan Coogler does with #BlackPanther is to reconstruct a whole mosaic of generational traumas that haunt ethnic communities around the planet. It goes deep, and not just for Namor, but for the care with plots and emotions that are truer than ever before in Marvel. 👇 pic.twitter.com/CC1Og73XZf

No spoilers. Wakanda Forever had so many emotions!!! It was creepy and BRU-TAL in parts. Heartbreaking and beautiful. And the fight scenes were WILD. I’m in awe of the care put into representing these cultures. #WakandaForever pic.twitter.com/HHSClXcxoY

Seeing this many positive reactions for Black Panther: Wakanda Forever will certainly make a lot of fans even more excited as they wonder why the release date couldn’t be for this very weekend. But despite those glowing responses, and the numerous celebrities dressed to the nines on the purple carpet, there was one issue brought up on social media regarding this premiere. And it’s the fact that Marvel and Disney failed to reach out to as many Black critics, bloggers, and artists as possible in terms of inviting them to attend the premiere. Specifically Black women, and Latina women, considering that they make up the majority of the cast in this film. Even those who have shown highly visible support to Black Panther through their work ended up hearing nothing but crickets while others got to walk the purple carpet. Writer-podcaster Karama Horne, who recently wrote the Marvel book Protectors of Wakanda: A History and Training Manual for the Dora Milaje wasn’t asked by Marvel and Disney to attend the premiere. Kayla Sutton, the critic/social media marketer who created the #WhatBlackPantherMeansToMe hashtag that went viral and gained massive attention from the media, while also allowing fans to express on Twitter why they cared so much about the Black Panther? Also not invited by Marvel and Disney.

Jamie Broadnax, editor-in-chief of Black Girl Nerds, and one of the founders of the catastrophic failure that was Universal FanCon? She was somehow able to score an invite.

I challenge all non-POC critics/journalists, big and small, to email their pr contacts and give up your seat to tonight’s #WakandaForever premiere or tomorrow’s screening to a critic or entertainment journalist of color. #VoicesMatter #RepresentationMatters

(I don’t know how effective or successful this was, but the gesture is greatly appreciated.)

This is not the first time that Black people who work in journalism and media have been ignored and overlooked by studios when it comes to attending premieres, or being permitted to provide interviews and press coverage for movies and television shows, and it unfortunately won’t be the last. No matter how much it is pointed out that certain brands and companies practically beg Black critics/bloggers/influencers to shine a light on their clients and their products so that they gain more visibility and profitability, those same brands and companies refuse to show them any gratitude or reciprocity after they get what they need and want. It’s both tiresome and predictable, and in the year 2022, these brands and studios should know much better than to act as if white critics/bloggers/influencers are the only ones who are worthy of their attention and their access.

TikTok is having this discussion at the moment about content creators, access and Black women facing systematic barriers.

So I'd like to ask the collective, how many Black creatives (women and non-men specifically) were invited to the Wakanda Forever red carpet?

I know of multiple Black creatives (women & non-men especially) who have gotten little to no access to press material, let alone in-person events like the red carpet.

This movie was destined to be a huge cultural moment, and to see this level of disarray is… disappointing.

All 15 of us were sitting in the same row at the back of the el capitain 🫠 https://t.co/RiA4zO4edI

I’m not trying to throw dogsh-t on anyone’s picnic, or convince everyone that Black Panther: Wakanda Forever should be cancelled or ignored upon its release. But Marvel and Disney could’ve and should’ve done a lot better in reaching out to make sure that the representation that is reflected onscreen in this film was reflected in the people who were provided with access and coverage to see this film and talk about it with the artists who helped to make it a reality. Much like the poor treatment that a lot of visual-effects technicians must deal with, Marvel and Disney aren’t the only studios in the industry who are guilty of such conduct, but they are undeniably the biggest. If they can be made to answer for their mistakes and their bad behavior about this? Then hopefully, other studios will change their ways and stop making it necessary for us to repeat this lesson until they finally learn it.