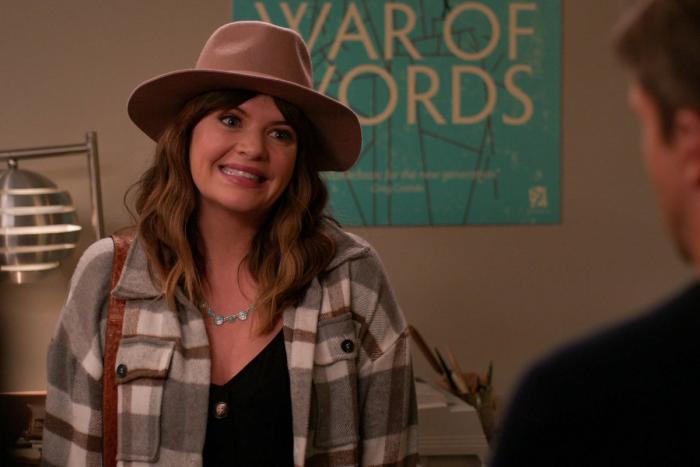 ABC's 'Home Economics' Added a Halloween Twist to Its Cast

We don’t talk about ABC’s Home Economics much, but as network sitcoms go, it is reliably solid. The Topher Grace comedy is no Abbott Elementary, but it is consistently enjoyable, thanks largely to a terrific that includes Grace, American Vandal’s Jimmy Tatro, Sasheer Zamata, Karla Souza, and Caitlin McGee (Mythic Quest).

Viewers can also likely expect to see a heavy dose of Casey Wilson (Happy Endings), at least in the short term. This week’s episode of Home Economics was a Halloween ep, which saw Topher Grace’s Tom give a reading of his memoir Home Economics in a bookstore where he appears to have a crazed fan played by Casey Wilson. By the end of the episode, however, we learn that she’s not a stalker, but a woman who read Tom’s memoir, connected the dots, and realized that Tom’s father is also … her father. A DNA test would later prove that Tom and Sarah have a half-sister owing to an affair their father Marshall (Phil Reeves) once had.

I’m fairly certain this was a way to insert Casey Wilson’s character into the comedy for at least a few episodes. In case it’s not apparent from all the hiding behind laundry baskets and podiums, Caitlin McGee — who plays Sarah — is pregnant. In fact, she gave birth to her and her husband Patrick Woodall’s baby in September. My guess is that she will take some time away from the series — or at least, her role will be temporarily reduced — while the rest of the family deals with the half-sister bombshell.

Besides the addition of Casey Wilson (at least temporarily), it should also offer more opportunities for Tom and Sarah’s parents (Phil Reeves and Nora Dunn) to make additional appearances, and it’s a real treat to see Nora Dunn as the grandmother in Home Economics.