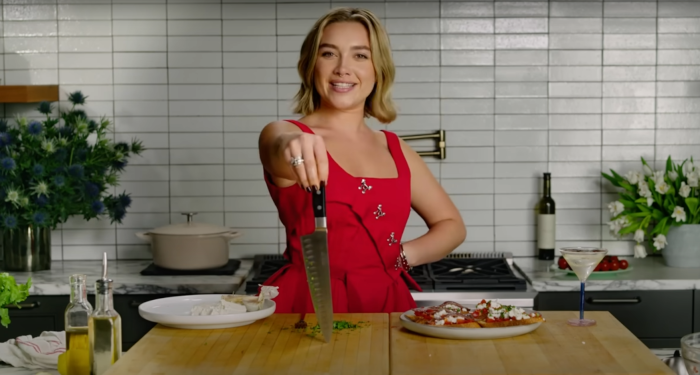 Fresh off her second-in-a-row top 10 finish in the Pajiba 10, Florence Pugh has taken her talents to Vogue Magazine. Again. Temporarily.

There are a metric ton of celebrities out there, but I don’t know how many of them have the raw, unbridled charisma of Florence Pugh. My daughter is a huge fan and during the pandemic when everyone was locked up, she introduced me to a YouTube video series called “Cooking With Flo.” Actually, it may have been called “Florence Pugh Cooking Show” back then but basically, it was Flo on her phone in her kitchen, making short videos of the food she was cooking.

She’s genuine and unique and fun when she cooks, so fun that you barely notice the passing of time while you’re watching her whip meals up. Her dad is a chef, so she has some experience in the kitchen, and even though it’s just her talking to her phone, ‘Cooking With Flo’ somehow captures one of the most elusive elements of the best television shows: when it’s over you want to be back in it. She keeps it super light and breezy and I can’t remember an episode of Cooking With Flo that wasn’t a treat.

This was one of the first ones I saw.

This was another fun one, and you get to hear her pronounce yogurt “yaw-gurt”

This one is great, too. She’s a real person, down to earth, uses food that you get at a regular supermarket, and she leaves her mistakes in her videos. It’s not produced. It’s just her starting and stopping the recording on her phone.

Sometimes Flo would get busy and vanish for a while and then my daughter would whisk me back to pre-pandemic luxury with this video where Flo narrates her way through an unscripted tour of English cuisine for Vogue.

So, in a way, it makes perfect sense for Flo to bring it all full circle and have Vogue professionally produce her first real honest-to-god cooking segment that isn’t her just listening to tunes in her kitchen.

The amazing thing is that they’re all great. I could watch her cook all day long. She does it in a way that’s welcoming and unpretentious and she demystifies a lot of it, plays up the discovery process and giddily highlights her errors. She spills when she takes sips of things and spills when she takes bites and laughs through it all. Sometimes she uses knives to capture runaway tomatoes and sometimes she guesses at oven temperatures. She doesn’t pretend to be a professional chef, she’s just a person who truly loves cooking.

The kitchen is Florence Pugh’s happy place and it’s a place she’s excited to share. Her willingness to be herself, unabashedly, vulnerably, is the difference. Everyone else has food, but only Cooking With Flo has Florence Pugh. Whether it’s an off-the-cuff recording of something she whipped up at home or her new foray into a more produced fare, she’s a delight to watch.

Could this be the start of a real Florence Pugh cooking show? I don’t know, but wherever she cooks next, people will certainly tune in.

You can find all of her cooking videos here.


← The Case Against 'Velma' On HBOMax | 'The Last Of Us' Episode 2 Recap: Anna Torv And Clickers →


Image sources (in order of posting): Vogue, YouTube
Most Viewed