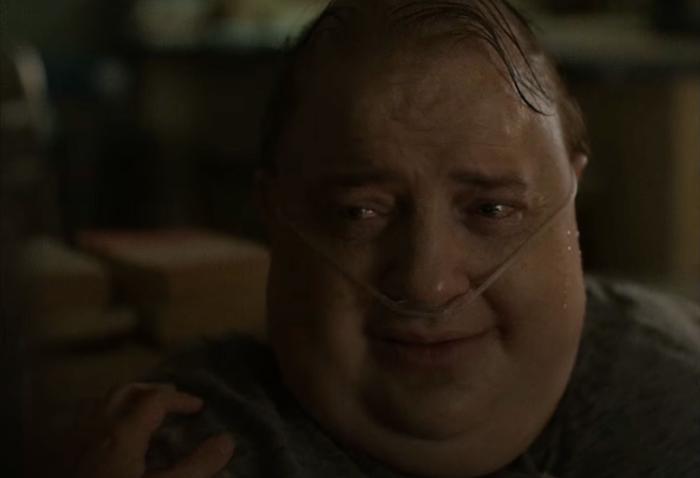 Why Hollywood Loves Fat Suits and Why They Suck

After many months of festival hype and standing ovations, The Whale has finally premiered in cinemas. Darren Aronofsky’s drama stars Brendan Fraser as Charlie, a writing instructor who weighs 600 pounds and is facing his final week of life. A recluse who never leaves his tiny apartment, he hopes to reconcile with his estranged daughter before his death, a fate he has accepted after years of disordered eating and depression following the painful death of his boyfriend.

Most of the press for The Whale has focused on Brendan Fraser, the comeback king of 2022 who gives a tremendously tender performance that is far better than the film it’s in. The other unavoidable topic of discourse has been the movie’s depiction of Charlie, a binge-eater and morbidly obese man who is often treated by the camera like a cautionary tale it’s okay to leer at. The scant marketing for The Whale has tried to avoid offering a full shot of Charlie’s body, perhaps because distributor A24 are aware of how heated reactions will be. For the role, Fraser, whose own changing body was the focus of much mockery for years, gained some weight. The lion’s share of his transformation is through a fat suit. The suit was designed by Adrien Morot, a make-up designer and regular collaborator of Aronofsky, and weighed about 300 pounds on its own. It took up to six hours of make-up and prep to get Fraser in and out of the costume, and it was so hot that it required internal cooling devices to stop Fraser from overheating.

A lot of promotion for the film has dug into the technical craft of the fat suit, and Morot’s desire to make something that captured the true essence of living in a body like Charlie’s. Fraser and Morot do seem earnest in their conversations about this film, even as the reviews note the horrendous voyeurism and trite fatphobia of The Whale. Yet none of this is new. The fat suit problem is an old one that Hollywood has relied on for years.

Fatness isn’t exactly accepted by society at large but it’s certainly not welcomed in the entertainment industry. Plus size major celebrities remain rare and continue to be treated as forced platforms for concern trolling over issues of health and influence. When body positivity is raised, it’s typically appropriated by those with bodies already considered ‘acceptable’ (and is usually extremely white, despite the movement’s roots in the work of fat Black women online.) In an industry that deifies the ‘transformation’, it’s still unacceptable to put on weight for non-professional reasons. The basic whims of our bodies, which are often utterly indecipherable, are to be derided.

Actors’ physical transformations for certain roles have long been fetishized as the utmost form of dedication to their craft. This takes various forms: extreme weight loss or gain; use of prosthetics; muscular gain. This is an extension of a basic tenet of acting: to turn yourself into someone else and have the audience believe that you are no longer you. Even as VFX advance to a level where such changes can be replicated without physical harm, the focus is still on the extreme labor of literal transformation. Audiences and the industry (especially Oscar voters) love to see someone like Christian Bale remould their body into something that’s often difficult to look at, as was the case with his upsetting level of weight loss for The Machinist. It makes acting seem hard, a sort of painstaking task that cannot easily be copied. It’s also obvious, far easier to understand as Capital A Acting than a subtler piece of work.

Fat suits are at least less demanding on one’s body than major weight gain in a short period of time (hello, again, to Christian Bale, this time for Vice.) But the use of fatness as a costume comes with its own problems: the idea that you can literally shed the body that causes such strain and that before/after transformation becomes the focus of the promotional campaign.

At the heart of this problem is also one of pure craft: most fat suits don’t look good. They certainly don’t look like the real bodies of fat people, in terms of movement or physics. Part of this is a practical choice made by the filmmakers. It’s easier to make your lithe actor walk around in their fat suit if it’s lightweight, more like foam than flesh. Consider Gwyneth Paltrow in Shallow Hal or Eddie Murphy in Norbit, displays of efficiency rather than realism. All the better for a pratfall. Even in non-comedic narratives, fat suits take on an uncanny quality, such as Chrissy Metz, ironically, having to wear a fat suit for a season of American Horror Story. It’s difficult for make-up artists to fully replicate real skin, so many actors’ faces take on a strange sheen or green coloring with their added jowls. Some struggle to get the facial balance right, so every newly fat actor has the same shape to their cheeks and chin. There are rare exceptions. Gary Oldman’s prosthetics and fat suit in Darkest Hour, where he played Winston Churchill, are easily the most realistic ones I’ve ever seen in film. That probably didn’t hurt when it came to winning him his long-delayed Oscar.

The Whale is not intended to be a ‘laugh at the fat person’ story in the way that so many films with fat suits are. Yet its treatment of a fat body cannot help but replicate some of those harmful tropes. A lot of this is rooted in the screenplay by Samuel D. Hunter, based on his own play, but it’s also an inevitability for a director like Aronofsky who is fascinated by the various ways our bodies betray and gross us out.

I do wonder if it would be possible to tell this story well, to explore the life of a depressed person with disordered eating who lives on the fringes and must deal with their failing health. There’s certainly a gap in the market for narratives that center such people. But there’s no way such a film would ever be made with the involvement of someone who lives that life. Aronofsky himself noted that it would have been impossible to insure an actor who weighed 600 pounds. The story of the fat suit is as much one of who gets to tell which stories and why as it is one of basic humanity. It’s also a plea for our entire society to reprogramme itself in terms of how we view and empathize with fat people. It’ll take a lot more than one film to change that, alas.


← Netflix's 'FIFA Uncovered' Is a Great Introduction to Its History | 'Let the Right One In' Ending Explained. Will There Be a Second Season? →