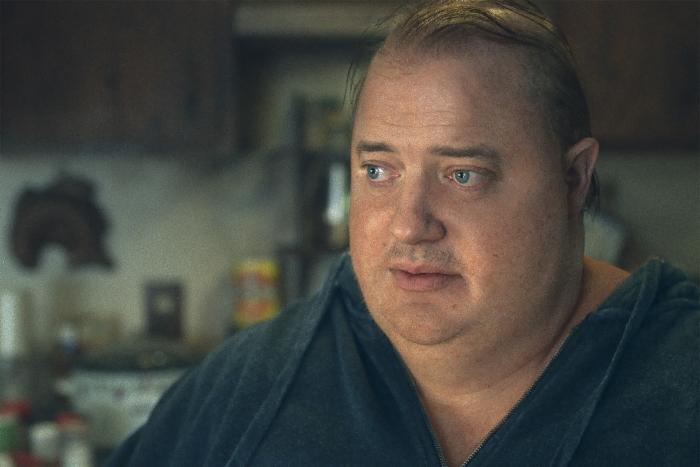 Over the past two decades, we have allowed director Darren Aronofsky to drag us through a whirlwind of the world’s most visceral body horrors. Drug needles jabbed into infected arm-holes, cracked toenails, snapped baby spines—seeing Mickey Rourke get stapled seems almost quaint now that we’ve watched America’s Sweetheart Jennifer Lawrence punched in the face fifty times and turned to straight-up ash. His cinematic bombast has, in my opinion, worked more often than it hasn’t—provoked thought more than puke. His work’s challenging obviously, and it often flies right off the deep end, but I’ve almost always enjoyed the ride.

Beaching up this weekend then is The Whale, Aronofsky’s latest and perhaps most miserablist entry into his self-martyrdom canon. It stars beloved ’90s icon Brendan Fraser, under an awful lot of latex, as Charlie, an English teacher who’s let his weight spiral out of control after the death of his partner. An adaptation of Samuel D. Hunter’s 2012 stage-play (adapted for the screen by the playwright himself) The Whale checks off all the boxes on Aronofsky’s favorite list of grotesquerie concerns—the body as an outer expression of inner turmoil; check. A tumultuous parent-child relationship; check. Spirituality as a fiery ooze in our bellies that just wants to explode out, check. So why does it all ring so hollow this time?

Coming in somewhere around six hundred pounds, it’s obvious the orbit around Charlie will have to remain small—this no doubt fit the stage-play’s mounting sense of claustrophobia just right, and that translates fine enough to the screen. We, like Charlie, must stay contained to Charlie’s apartment—making it to the bedroom is a monumental task for him and so it remains for us, the viewer; Aronofsky makes a trek to the front porch to pick up a pizza delivery feel positively David-Lean-ian in scope. This too is hardly new territory for Aronofsky, as a glance back at his filmography affords us a clustering of ever smaller circles and squares—the ring in The Wrestler, the stage in Black Swan, the house in mother! Ellen Burstyn’s apartment of mounting horrors in Requiem For a Dream. The man knows from confine.

Still, it’s Aronofsky’s Noah (the other Aronofsky project I have little patience for) that The Whale brought to my mind most often—Charlie’s apartment feels like an arc adrift at sea. Rain swamps the windows and Charlie’s heaviness forces him to walk as if the floor is rocking beneath him; as if he might (and will) fall over at any moment. There’s even a little bird that lands on his windowsill time and again, the longtime Biblical and mariner signifier of “Land, ho.” And that’s before we even get into all of the Moby Dick stuff—a term paper on that novel written by one of Charlie’s students is quoted time and again across the length of The Whale, coating these four walls in metaphorical sea-foam.

The story, as far as it goes, is one of slow-motion suicide—Leaving Las Vegas with Pringles in place of rum. A last week in the life of, Charlie’s heart is on the verge of giving out. But he’s got some I’s he longs to dot before thar she blows. There’s his caretaker Liz (Hong Chao, best in show by miles)—the sister to his former partner, she begs Charlie to go to the doctor while hand-delivering meatball subs, churning up oceans of genuine empathy every time she’s on-screen. There’s Charlie’s estranged wife Mary (Samantha Morton), whose broken heart at her beloved leaving her for a man has curdled into bitterness and gin. And then there’s their daughter Ellie (Stranger Things’ breakout Sadie Sink), whose rage at her father’s abandonment has made her mean, lashing out in the cruelest ways possible as he attempts to forge some last-minute connection with her via her school-work.

As he did with The Wrestler (and that one scene at the kitchen table in Requiem, you know the one) I’ll admit Aronofsky again got a mangled parent-child relationship to speak to me in a very nearly too intimate manner—slap these movies together and you’ve very nearly got my own tale of woeful paterfamilias. Three years ago was the last time I saw my father, a former bodybuilder who’d abandoned me and my mother when I was a child—now bedridden due to obesity and the raft of health problems that’ve plagued him for years. I couldn’t bring myself to sit on his bedside because of the filthy state of the place. Indeed I couldn’t get out of there fast enough. None of that had anything to do with our estrangement, which goes back decades, but in your anger, you latch onto the excuses immediately at hand.

I bring up my own empathic brokenness in as wayward a spot as this movie review with a purpose, I promise—my father’s story and damage is not mine to tell, but I can tell you this much: the man isn’t a metaphor. He’s self-destructive, homophobic, friendly to a fault, infuriating, a charlatan, and a lover of John Wayne and a million other things that I won’t ever know. But seeing a body that so resembles his and a story that so resembles ours reduced to grunts and ham-fisted platitudes in Aronofsky’s hands here hit me as some kind of serious misstep.

Fraser, open and lovely, still plays Charlie as ten miles too decent, nigh on saintly—his big blue eyes beatific under a brow aglow with flop-sweat. He’s here to swallow up all the sins of the world like Pinocchio’s Monstro, gulping and gulping until another Eden is left in his wake, and for all this effort (so much effort) it’s all just too easy. The Whale tries to awkwardly straddle the ciphers of Aronofsky’s allegorical obsessions with the sins of some very too-real flesh, and it comes up wanting.


Image sources (in order of posting): A24,
Most Viewed