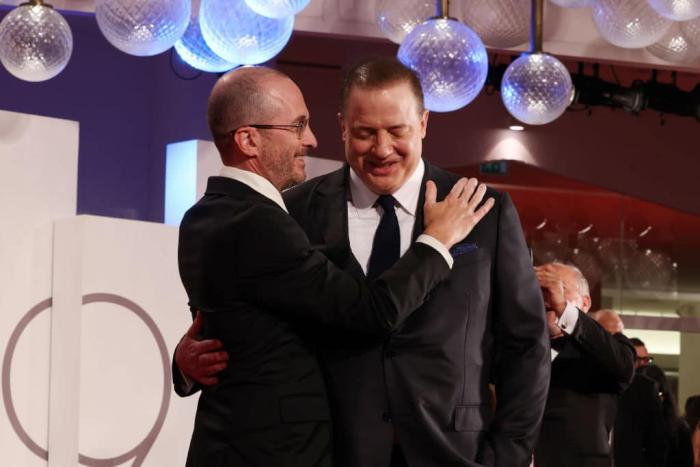 Darren Aronofsky’s newest film, The Whale, premieres on December 9. That’s one month away. Until today, we had seen no trailer for the film, no posters, and only a tiny handful of official images. This is a film that its distributor, A24, has a lot of hopes in. It’s played multiple film festivals and been welcomed with open arms. Its leading man, Brendan Fraser, has received endless standing ovations from eager crowds. He’s currently the frontrunner in the Best Actor Oscar race. This film seems like it should be a slam dunk to promote: an awards-baity family drama with the ultimate comeback story for its beloved lead. So, why has it taken until today for us to receive a trailer? Well, this isn’t an easy film to sell.


Based on the play by Samuel D. Hunter, The Whale is the story of Charlie, a middle-aged gay man who weighs 600 pounds and lives alone in his dark apartment. With his health failing, he hopes to reconnect with his estranged daughter, from whom he grew apart when he left his family for a man, who later died. For the film, Fraser wears prosthetics and a fatsuit, which weighed around 300 pounds and took over four hours to apply.

The marketing, such as it has been, for the film has done much to hide Fraser’s appearance from audiences. The trailer we see above, which is barely a minute long, only shows snippets of him in the prosthetics. There’s no full shot of his body. Really, he’s barely in the trailer, which doesn’t reveal the plot. Instead, the narration talks up compassion, and how people are incapable of not caring for others. That’s meant to be the theme of the story, a plea for sympathy and understanding to those society has hurt or maligned.

But, as many reviews noted, The Whale isn’t exactly successful in this request. Sarah Marra, writing for Lainey Gossip, said the film was ‘awful’ and portrayed Charlie’s body and disordered eating as ‘spectacle,’ giving the audience ‘to, say, laugh at a scene in which Charlie cannot bend enough to reach something he’s dropped.’ Mark Hanson for Slant said that the camera ‘leeringly treats Charlie as an unsightly object of pity throughout, it’s difficult to deny the film’s fatphobia, though its mawkishness is no less oppressive.
’
There’s a reason we’re having this conversation, a familiar one, with this film. It’s not simply the societal fatphobia we must contend with but the media’s long and less-than-honorable depiction of fat people as objects of pity, scorn, or comedy. Many of the criticisms about The Whale (which has also been strongly reviewed) note that it doesn’t practice what it preaches. Even if it did, however, it’s clear that A24 would still have trouble marketing this story. How do you sell such a drama without turning its lead into a punching bag or subject of leering? That’s how society tells us to look at fat people, when it allows us to see them at all.

So, what we have here is a very obtuse trailer, a teaser more than anything else, that’s more focused on the critics’ quotes talking up its acclaim than the film itself. Even the poster is just an image of Fraser we’ve already seen, the one used in all of the reviews.


It’s not a terrible strategy. Sarah Marrs and I even theorized that they would do a trailer that was just a compilation of all of Fraser’s standing ovations. They didn’t seem to know what else to do, hence waiting until a month before its release to release anything. I imagine they’re hoping the reviews and love for Fraser will do the heavy lifting, but that can only carry you so far.

Will they release another trailer that more fully details the plot and Fraser’s character? How can A24 avoid the perils and pitfalls of this film, especially once more people see it and the conversations around it get louder? I’m interested to see where it goes.