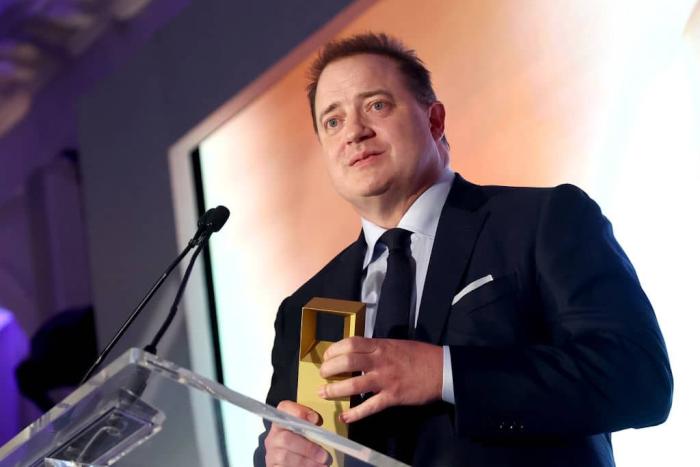 We all heartily welcome the long-awaited Brendan Fraser renaissance. The actor has been through so much, experienced such hardships and cruelties from the entertainment industry, and thoroughly deserves his return to the spotlight as a character actor. Some of the most heart-warming moments of the 2023 Oscar race so far have been seeing Fraser receive endless standing ovations and support from fans, critics, and the film world alike for his role in Darren Aronofsky’s The Whale. He’s received the most stellar reviews of his career and some of the strongest write-ups for any actor in 2022. It’s no wonder he’s being talked up as a major Oscar contender already. Of course, there are some issues with The Whale.

Fraser plays a depressed professor who weighs 600 pounds and lives as a recluse in his apartment, unable and unwilling to leave. After the death of his boyfriend, he has decided to essentially eat himself to death. The role required Fraser to don a fat suit, a practice that has become increasingly controversial for many reasons. It’s inspired a lot of conflicted feelings, to be sure. Many have praised the film for its portrayal of a depressed man with an eating disorder while others have slammed it as fatphobic and leering in its attitude towards its protagonist. Our friend Sarah Marrs of Lainey Gossip did not hold back in her review of the film. As she wrote:

‘What humanity, sympathy, and compassion exists in The Whale is there because of Brendan Fraser’s warmth and kindness radiating through his performance.

There is a thread of Charlie’s disordered eating being a form of self-harm, but Aronofsky seems uninterested in framing it that way, as much as making a spectacle of the big man binging, which in turn degrades Charlie and gives the audience permission to, say, laugh at a scene in which Charlie cannot bend enough to reach something he’s dropped.’

I haven’t seen the film yet but a lot of these issues have certainly been swarming in my mind. Actor Daniel Franzese, who you may recognize from Looking and Mean Girls, explained his own conflicted feelings about the film and the fat-suit problem. He contextualized it through his own existence as a fat queer actor in an industry where he’s often overlooked for roles.

‘I love Brendan Fraser, [so] I’m very conflicted. Seeing him get up so modest in Venice and have that moment, I was very happy for him. He’s a lovely man. And it’s great. But why? Why go up there and wear a fat suit to play a 400-lb. queer man? To finally have a chance to be in a prestige film that might be award-nominated, where stories about people who look like us are being told? That’s the dream. So when they go time and time again and cast someone like Brendan Fraser, me and the other big queer guys, we’re like, ‘What the… ?’ We can’t take it!’

We talk a lot about representation and the importance of good inclusive casting on this site. After decades of the entertainment industry centering cishet white men as the universal default and then excluding everyone else, it still feels like we’re in the era of trying to rebalance the scales. Progress happens but is incremental and often faces ridiculous pushback from bad-faith right-wing losers who are trying to kickstart a culture war.

Fatness is part of that. It’s still rare that fat characters get to be much in pop culture beyond acceptable jokes, cautionary tales, or the jolly but pathetic comic relief. Plus-size people don’t get to be the romantic idols very often, or face-punching superheroes. That’s not to say that you can’t tell a story like The Whale. Art can and should push boundaries and tell uncomfortable narratives, and a drama about a man who is hurting himself through his disordered eating is certainly worthy of exploration. It just seems like Aronofsky and writer Samuel Hunter (who’s adapting his own play) weren’t the ones to do it well. As Sarah noted in her review, ‘The sound design is appallingly focused on obscene eating sounds [and] Rob Simonsen’s portentous score swells ominously any time Charlie’s body is the focus of a scene.’ It makes Charlie’s fatness a kind of grotesquery, which I suppose isn’t much of a shock from the director of mother! and Requiem for a Dream. If you’re going to tell an already controversial story then not using the tritest tools of fatphobic stereotyping seems like step one.

As for the fat-suit, that’s also part of a much wider conversation about how we dehumanize fat people. The industry loves to celebrate actors who put on weight for roles, only to get back to ‘normal’ in time for the premiere so we can lavish praise on them for being so committed to their craft. The Oscars, in particular, love a big physical transformation, be it prosthetics or fat-suits. The kind of acting that gets rewarded the most is the showiest grandstanding, and nothing says that better than pretending to be very fat for a few weeks then shedding the costume. I can’t imagine it would have been easy or viable for Aronofsky to find an actor with the exact physicality of Charlie (or an insurance company who would want to work with them.) So hey, the narrative is already set up for whatever actor he does hire, and he does love to facilitate a good comeback.

I do think there are a few caveats worth adding here, one of which is that Brendan Fraser is fat. He’s a very tall guy but he’s also got a gut and the frame of, frankly, most men in their 50s that I know. He’s been through the public shaming of being the leading man who got old, put on weight, and stopped being desired as a sex object commodity. He was injured several times over the years after feeling pressure to do his own stunts in films like The Mummy. I imagine Charlie’s story greatly appealed to him for many personal reasons. Frankly, he knows about the physical strain and public scorn of this more than any actor who’s still soaking up the spotlight as an A-Lister (I guarantee this film wouldn’t be received so warmly if anyone other than Fraser was leading it.) This isn’t to draw direct parallels between Fraser and a fictional 600 pound man. That’s not fair to either the actor or the character. But I do think it’s worth contextualizing how Fraser’s own experiences work within this story.

This is a conversation that will continue long after The Whale has left the discourse. I’m not against an actor transforming themselves for a role. That’s just part of their job. The issue is more with the ways we heavily fetishize the transformation itself, often at the expense of allowing marginalized people to tell the story properly. If we’re trained to view fatness as either an easily removable costume or something unworthy of empathy then nothing will change.


← Beth Resurfaces on the 'Quantum Leap' Reboot, Which Delves into the Sam Beckett's Mysteries | Christ, the Characters in 'Andor' Slap →