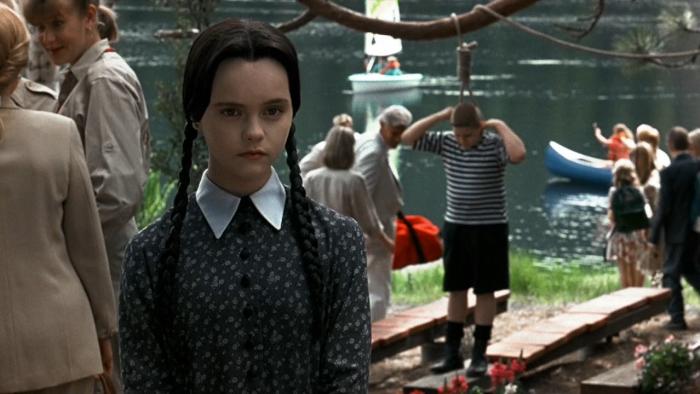 This week sees the release of The Addams Family, the latest reboot of pop culture’s most famous goth family (sorry, the Munsters) who have been a iconic and near-constant presence in our lives since cartoonist Charles Addams introduced them to The New Yorker in 1938. Since then, the creepy and kooky clan has been featured in television, movies, video games, comics, cartoons, a major Broadway musical, a pinball machine, and endless homages. Now, it’s getting the family-friendly animated movie treatment, with an enviable cast that includes Oscar Isaac, Charlize Theron, Nick Kroll, and Snoop Dogg. The trailer wasn’t particularly inspiring, sadly, with the animation looking oddly cheap and all the jokes inspiring responses of cringe rather than humor. Then again, even if it turns out to be great, it’s an Addams Family film following in the footsteps of one of the best comedies of the 1990s, so it was always going to be an uphill climb, and hell, I’m always happy to have an excuse to talk about Addams Family Values.

It’s surprising how many critics straight-up disliked Addams Family Values upon its release. Richard Schickel of Time called the film ‘an essentially lazy movie, too often settling for easy gags and special effects that don’t come to any really funny point.’ Ouch. Time has been kinder to it and many critics have decreed it to be a leading example of a cinematic sequel that surpasses the original. Indeed, it’s miles funnier than the first film and its social satire lands with a much heartier punch. Everyone involved seems to be enjoying themselves far more and screenwriter Paul Rudnick — who is currently working on the book for the Broadway musical of The Devil Wears Prada — has such a strong grasp over the delightful contradictions of this family: Their old-money morbidity is far more ‘normal’ than the preening wannabes of suburbia.

The joke of the Addams Family has always been clear: What others find bizarre or frightening is utterly normal to them, and they either don’t see that difference or they simply don’t care. It’s not hard to see why that idea would remain so appealing many decades after their introduction to the world. The first feature film, 1991’s The Addams Family, mines a lot of great humor from what is essentially a one-joke concept but feels too disjointed to fully work. What Addams Family Values does is turn everything up one setting too far: The one-liners are quicker than ever; the gothic atmosphere soapier and more lascivious; the stabs at suburban hypocrisies sharper. The comedy is so effective because this beautifully detailed world is so fully inhabited by this ensemble of alluring oddities.

So many of the jokes cut to the bone in unexpectedly dark ways. Gomez is probably a serial killer (‘Isn’t he a lady killer?’ ‘Acquitted!’) A stripper is burned alive in a giant cake! A teenage girl seems to have a startling knowledge about the scalping process! The Addams clearly have no qualms about indulging in every taboo known to man, living or otherwise, and yet it only makes them more likable. Say what you want about a family with their own guillotine, but at least they know how to enjoy life more than their supposedly normal neighbors. To the family and the movie itself, these people are easy enough to mock but it’s far funnier (and more insulting to them) to express pity. How could any normal married couple with kids, a mortgage, and appearances to keep up be as passionately devoted to one another as Morticia and Gomez are (Anjelica Houston and the late great Raul Julia remain possibly the hottest couple committed to celluloid, and surely no other spouses in pop culture are having as much amazing sex as Morticia and Gomez Addams.)

At the center of the movie is one of the great scene-stealing comedic performances of the decade and possibly of all time. The villain in the first film is pretty forgettable aside from that questionable German accent, but for Values, the film-makers knew what was needed was bombastic camp. Enter Joan Cusack as Debbie Jellinsky, the new Addams nanny and professional black widow. Her objective is simple: Seduce rich men, kill them off (preferably on the honeymoon if at all possible), then run off with the money. Getting one up on the socially inept cave-dweller that is Fester Addams should be a piece of cake, especially for a pastel sociopath like Debbie. Ha. The genius in Debbie, and the tragedy that costs her her life is that she is one step away from being the perfect addition to the Addams clan. Sure, she prefers all-white ensembles over black, but she has no qualms about a feat of casual graverobbing to get her hands on a good engagement ring and murder comes as casually to her as breathing. Give her some dark eyeliner and she’d be a stellar matron to the family, but alas, she is too attached to the cookie-cutter WASP life of American wannabe upper-middle-class suburbia. It doesn’t hurt that Cusack is giving it her absolute all in a pseudo-drag performance that wouldn’t feel out of place in a John Waters movie. It’s rare for full-on broad comedic performances to get Oscar nominations. While both of Cusack’s nominations are for performances in that vein, I still think this is her magnum opus and the one that deserved to be rewarded as such.

Of course, even with Joan Cusack devouring the set in every scene she appears, Addams Family Values is undeniably Wednesday’s story. I’m reasonably sure that Christina Ricci wasn’t created in a lab with the exclusive purpose of playing Wednesday Addams, but if that turned out to be the truth then I wouldn’t be surprised. Her subplot about the summer camp from hell, the first blush of teen romance, and perhaps the funniest ‘screw Columbus’ fake-musical committed to film is the perfect melting pot of adolescent snark, morbid with, and just a hint of sweetness. One of the great joys of the Addams family (except for Fester) is that they’re always two steps ahead of everyone else, even if they don’t show it. Wednesday is dismissed as weird and gloomy by the forced joy practitioners of Camp Chippewa, but her refusal to be the sanitized brand of happy they demand of her always gives Wednesday the upper hand.

‘Why be normal when you can be weird’ is the stuff of Instagram slogans and bedroom wall transfers now, to the point where it’s almost hopelessly conventional, but no matter how cool or aspirational the Addams Family have become, they’ve retained that abrasive edge that keeps them just ahead of the curve, and Addams Family Values is the greatest exemplification of that. Other comedies of the era tried to emulate it but few could replicate it with such panache. Revisit it today and you’ll find a comedy that’s just as hilarious now as it was 26 years ago. Except for the end rap song. Maybe skip that.

← Who Was The Hooded Figure in The Good Place Chillaxing? | 'Supernatural' Season 15 Premiere Recap: Who Is Belphegor? →