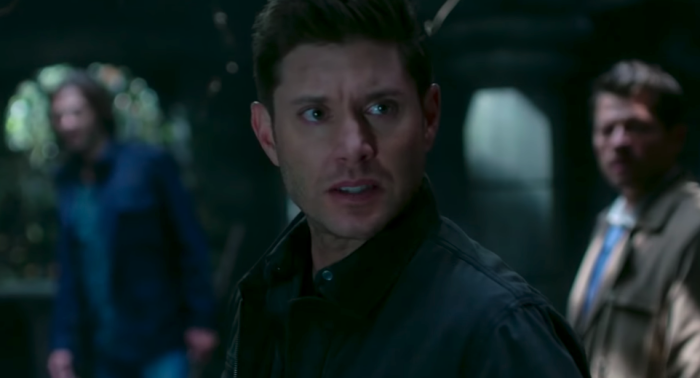 'Supernatural' Season 15 Premiere Recap: What Lies At The End Of The Road?

Some shows outstay their welcome. Some are cut down before their time. And some lucky few get to reach the end of their runs on their own terms. Supernatural is definitely one of the lucky ones — an underdog that became an unlikely juggernaut, and is now, in its 15th and final season, preparing to say goodbye with grace. It’s a show that’s been buoyed by a loving fanbase and an ability to make even the most ridiculous, cockamamie plot twists work, and it’s clear from last night’s season premiere that Supernatural’s last bow will be a loving testament to both.

The episode picks up exactly where the previous finale ended: Sam, Dean, and Castiel facing off against the risen, undead hordes that God (a.k.a. Chuck) has released from Hell to hound them. It seemed that God was shaping up to be the biggest and baddest Big Bad the Winchesters ever faced, which is the first notion this season decides to dispel. The show’s end seemingly won’t be about the Winchesters defeating the Almighty (though if I were a betting woman, I wouldn’t discount that just yet). Instead, what’s important isn’t that Chuck unleashed literal Hell on Earth — it’s that he left after doing so. God, displeased with his favorite toys for not doing as they were told, has decided to burn his toybox and move on. But this leaves Sam and Dean with perhaps the first real glimmer of hope they’ve ever had. Sure, they have to find a way to save the world from several billion rampaging spirits — but that’s just any other Thursday on this show. What matters is that God left — for good this time. There’s nobody left to pull the strings of their destiny. Nobody left to pit them against impossible odds, or make their lives miserable for His (and our) entertainment. If they win — WHEN they win — they’ll finally be done. They’ll be free.

Or at least, that’s the plan. But first: ZOMBIES AND GHOSTS! Sam, Cas, and Dean pick up Jack’s dead body and retreat into a nearby mausoleum, where they become trapped by the undead army that surrounds them. They have no way to escape, until Jack stands back up and offers to help. Or rather, the demon that’s hopped into Jack’s meat suit does! His name is Belphegor, and he claims to be just an average Hell’s grunt who wants to return things to the status quo so he can go back to enjoying the sounds of tormented souls of whatever. Convenient? Yes, suspiciously so. In popular lore “Belphegor” is actually a prince of Hell known for seducing people by helping them make discoveries and inventions for cash, and even if that’s not quite the angle Supernatural is taking with this new character, I can’t imagine that he’s quite as golly-gee-whiz helpful as he appears. Regardless, the boys have no option but to take him at his word and let him work a little magic to dispel the surrounding spirits and help them get the heck outta there.

The group heads into the nearby town of Harlan, Kansas, and on the way they see a blood-splashed car on the side of the road. Sam and Dean pretty quickly peg it as the work of The Woman in White — the very first ghost they tacked in the first ever episode of the show. The boys realize what we knew last season — that by releasing all the souls in Hell, God also released all the spirits Sam and Dean had already battled in the course of the previous 14 seasons. Saving the world this time around is going to be a serious victory lap. Other ghosts like Bloody Mary and John Wayne Gacy (yes, really) are already on a murder spree in Harlan. The big question is whether the archangel Michael has also been released from the cage — and that’s something Belphegor can’t answer for certain.

The rest of the episode goes by in a flash, as Sam and Cas focus on evacuating the town while Dean and Belphegor perform a barrier spell to contain the spirits, sort of like a giant salt circle. With no reports of a ghost-pocalypse in the news, the hope is that they can contain the rift (hellmouth, ha!) before the problem spreads. By the end of the episode, they’ve successfully set up their barrier, and now their real work can begin.

But if that all sounds too easy, fear not — there’s something seriously ominous going on with Sam (which itself is about as big a callback as this show could do). Remember how he shot God in the shoulder, and took a matching wound in return? Well, that wound still hurts, and even Cas couldn’t heal it with his angel mojo. Worse, when he tries Sam has a spooky vision of himself looking p-r-e-t-t-y evil, which doesn’t bode well for this final season being a full-on family love fest for the Winchesters. Did Sam mention this vision to anyone? OF COURSE HE DIDN’T.

One thing the premiere didn’t touch on was what’s going on with the real Jack, who last we saw was being awoken in the Empty by Billie the Reaper (nuDeath). So he’s still an ace up this show’s sleeve, as is Rowena who I think will be joining the fight with her magical prowess next week.

There were plenty of funny lines in the episode (“So what, Chuck throws friggin’ zombies at us now?”), but nothing got me misty eyed like Dean telling Sam, “So you and me versus every sould in Hell? I like those odds.” Me too, Dean. Me too.

But it was the final shot of the night that almost had me in tears, as it mirrored the end of the very first episode:

It’s been a long road so far, and it looks like Supernatural is going to lean all the way into the emotional farewells on this last leg of the journey.

← Why 'Addams Family Values' Is Still the Best Comedy of the '90s | 'A Million Little Things' Recap: What's the Deal with Jason Ritter's Eric? →